Diary of a Dorkette turns 7 today! Click the link below and find out how I am celebrating!

Seven years ago I started this diary with the hopes of sharing my experiences and memories about toys with other like minded people. Collecting and enjoying the magic of dolls and action figures has been a part of my life since I was a small child. I have never been able to walk away from that magic. Some of you know this as I have been involved with an ongoing toy soap opera that occupies many of my thoughts. Basically I am never going to truly grow up.

Lately the toy soap opera is all I have been posting. I have this toy soap story that I want to tell and share with those who enjoy it but today in honor of 7 years of Diary of a Dorkette I thought I would mix it up and share a real life toy story about my very first Barbie: Day to Night Barbie.

Let us travel back in time to a magical decade known as the 80's. It was 1985. I was three years old and playing with my cousins at a family party. I was one of the youngest cousins there but my oldest cousin Leslie was taking pity on me and brought out some of her toys so that I could entertain myself. One of the things she brought out was the Barbie Dream Kitchen. I was in love. I had never seen something quite like it. It was how I envisioned my own house looking one day.

This was my introduction to the world of Barbie. When Leslie showed me one of her Barbie dolls I was immediately aware at how I strongly felt the need to have one of my very own. I shared this very thought with Leslie. She understood, "We need to ask your mom and dad if they can get you one!" So that was our plan. We marched into the room with the adults, an area we were not meant to be in, and Leslie became my own spokesperson on why it was imperative that I had my very own Barbie doll.

My parents were probably tipsy from the party's libations because they thought the whole production was quite cute. My dad even laughed, "The stores are closed right now, maybe another day, like your birthday. Or Christmas. We'll call and let Santa know." But there was an urgency in our pleas, not from a place of being a spoiled brat but from the place of a little girl that had just realized there was a whole new way for her to view and play in the world. There was magic! And that could not be ignored for fear that the moment would be stolen away, never to be expressed again.

I quickly dragged my mother to see the Barbie collection that Leslie had. The cute kitchen. The larger than life doll. All of the fashions. My mom fondly looked at the items and recalled her memories of playing with her own Barbie dolls. I was shocked to know that a toy I so desperately wanted in my life was one that my mom had enjoyed as a kid too.

"You are too young for a Barbie doll right now. When you are a little older, maybe 5, we will go out and pick your very own first Barbie doll. These are big girl toys and you are just too young right now." My mother calmly stated all of this to my horrified self. Too young? How was I too young? At that time I was an only child with a slew of health problems. I was rather responsible and I played very carefully with my toys. Also the idea of waiting until I was 5 seemed like an eternity. It was simply a concept I did not understand.

So I did what I knew the most: I wore my parents down. I made sure I behaved at grown up dinners. I made sure my toys were always picked up. I made sure to be seen and not heard. I practically turned myself into an angel. Well. A smart devious angel because I had devised an Erica Kane sized plan and eventually my plan worked. My parents took pity on me and finally agreed that I could have my very own Barbie at the age of 3. I did not have to wait until I was an old crow at the age of 5.

Of course there were tons of Barbie options available to me. If I am being honest I wanted them all. The pink boxes with that stylish round Barbie font was the stuff of glitter dust from the stars. Alas there could only be one. So I went with the Day to Night Barbie. Maybe it was because she essentially came with two outfits already and therefore seemed like a great deal. (I doubt my three year old brain was smart enough for that) No, there was something very special about Day to Night Barbie that captured my interest beyond the transforming outfits. 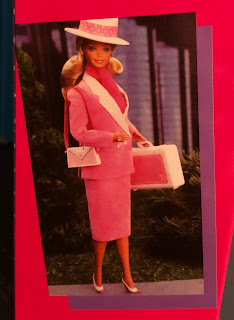 She was a business woman. She had her own office. A briefcase that matched her skirt suit and pumps that reminded me of sherbet ice cream from Baskin-Robbins. I knew she was the one and when I took her home and had help removing her from the box I felt like the world opened up a slew of possibilities to me. 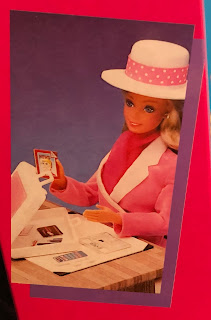 My Barbie worked in a skyscraper, like in New York. She was a boss. Damn it she owned 50% of this company and she would not be selling her shares to the Carringtons! (I watched a lot of Dynasty with my parents, I was a mini adult ok?) After all the business meetings and work on her calculator, my Barbie would do a quick and stylish wardrobe change so that she could enjoy the night life. Maybe she'd go dancing with Ken or maybe she'd go dancing on her own. There were glamorous parties. Fancy restaurants. Night drives around dangerous mountain roads that overlooked the ocean. Everything. 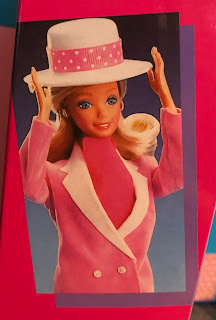 My Barbie was the creator of her own life and she made her own rules. All this magic and imagination for interacting with the world brought joy to my life, and to think, it came from a doll.

As I have gotten older I look back and realize that Day to Night Barbie was a pink print for how I would become a grown woman. She provided me with ideas for what it could mean to be an adult that were not immediately associated with the role of being someone's wife or being a mother. There is nothing wrong with those roles of course but my Day to Night Barbie helped me to dream that there were no limits, that I could strive to do anything my heart desired. (And while I do not work in a skyscraper in New York, I do work in an office building in a busy city and it makes me smile.) 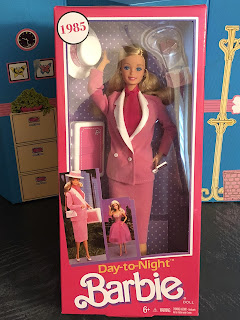 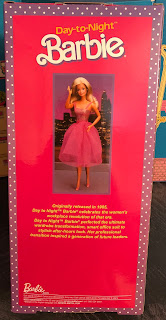 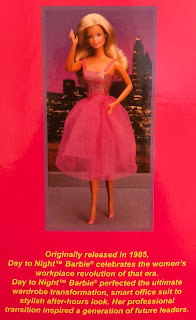 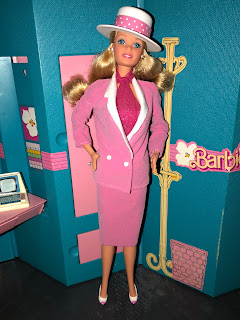 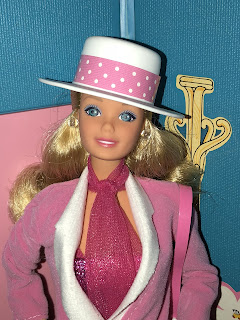 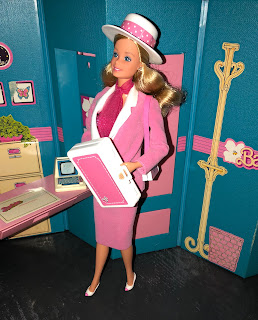 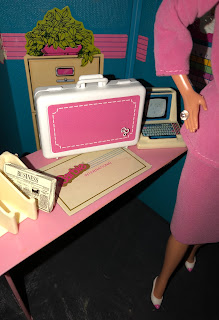 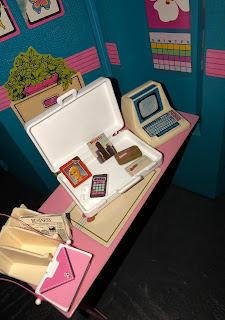 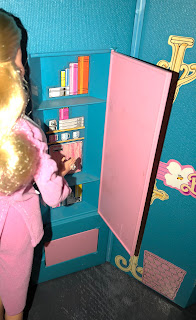 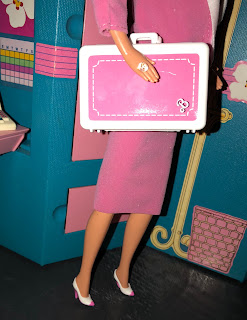 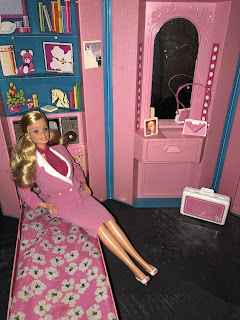 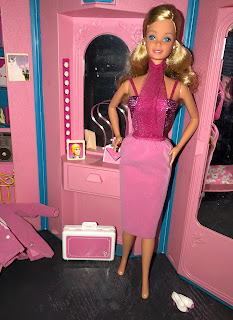 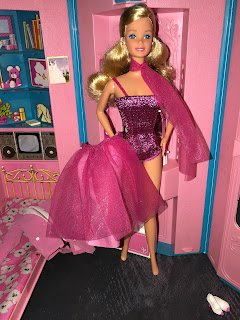 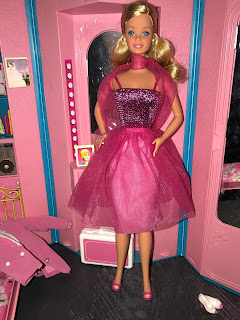 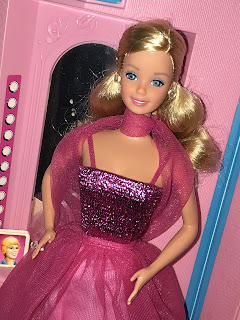 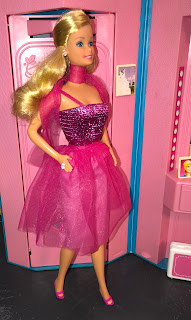 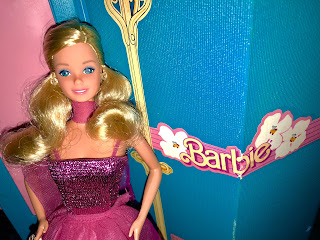 Thank you all for reading this toy memory of mine. And thank you for sticking around for 7 years. I don't post as frequently as I would like but that is only because I have such longer content that I wish to share. It takes awhile to take all those photos. I also have not forgotten that I previously talked up a Swans Crossing article featuring Justine Dantzer's story of her involvement with that toy line. The article is complete but I am merely awaiting Justine's approval and she currently has some business she is working on so there is a delay in that article being available for you all to read. Trust me though, it will be posted one day. Her story is simply divine. I also plan on more twists and turns with All My Toys. So stick around! I hope you are all doing well. See ya soon, hugs to you all!
Posted by Michael Lynn P. at 2:21 AM

Email ThisBlogThis!Share to TwitterShare to FacebookShare to Pinterest
Labels: Happy Birthday Diary of a Dorkette!