While I try and find a way to heal the wounds on my body from a particularly deadly season of mosquitoes (seriously, if I didn't know any better I'd say Mosquitor is after me) why don't we settle in for a new wave of Bits and Pieces!

Space. It's out there.

What with the recent developments of the first ever pink planet and the possibility that we are this-close to finding life on another planet, I just have to ask, have any of you collected the Outer Space Men toys? I've been aware of their recent return, but I have never really owned anything from this line. I actually really like the look of both the new items and the vintage pieces too. The story line is interesting as well. Each character comes from a distinct planet in our solar system. I loved studying space when I was younger. I was never interested in going to space because I don't do roller coasters/scary thrill rides, and flying to space just seems like it'd be similar to that of a roller coaster/scary thrill ride.

Anyways, I was looking over the Outer Space Men site, and they have some really cool stuff there! Not only do they discuss so much history regarding the toy line, the cool thing is that the original creator of the line (Mel Birnkrant) joined toy forces with long time fan Gary Schaeffer and they have brought it all back.

Ya know, I have to admit something, I don't always follow the behind the scenes events that lead up to a toy line getting made, but I wanted to learn more about this line because I have seen these items online and what-not and they just look really cool. The whole process and love that has gone into the return of this line has been astonishing. They've created a graphic novel:

They've also released newly updated figures that were sculpted by the Four Horsemen:

And there is a female character in the works: 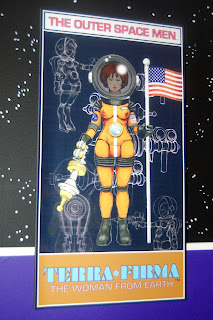 How cool is Terra Firma? I so want to see this figure made. I just think this is such a fun line. So is anyone else a fan or already collecting this line? Let me know your thoughts on it. And again, if you want to learn more, head over to The Outer Space Men.

My love for female super heroes doesn't begin and end with just She-Ra. I'm also a tremendous fan of the badass women from the Marvel Universe. As such, Hasbro's Marvel Legends have really been upping their game lately with new items of some of my favorites. (By the by, has anyone come across that rare Dani Moonstar ML yet? I'm beginning to think she's a toy myth.) 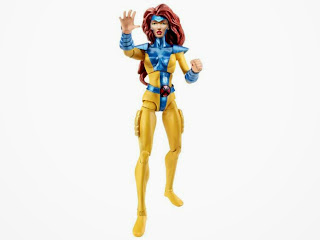 This is one of my favorite versions of Jean Grey. I love this era of her and this is the first time that this version has ever been made with such great detail. She looks like the 90's. I remember back when Toy Biz had really started rolling out all kinds of X-Men figures, I would call their toll free number and ask them which figures would be coming out next. "Can you tell me if they are going to make a Mystique? Jubilee? Jean?" Oh the laughs they must have had at my expense!

I must say though, the people working the Toy Biz Toll Line were always very kind to me. They'd listen and pretend to rattle off from a list, "Sure, Mystique is on the list to get made. Jean will probably come out eventually." I'd get so excited. Had I had friends at the time I would have called them up ready to dish the dirt on what was coming from Toy Biz. Such a mess. But, these were the things you did for fun in 1993.

Of course, no toy line would ever be complete without those darn variants. Because Hasbro loves us so much, they decided to make two extra variants of Jean: 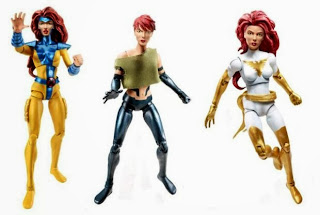 I'm intrigued by the Age of Apocalypse variant, but that White Phoenix variant just looks so cool.

When I was younger I used to think Jean was such a boring character, she didn't have Rogue's sass or Storm's awesomeness. But I grew to really like her and of course her role in the X-Universe is so important. For the life of me I don't know why Marvel continues to sit on their thumbs with bringing her back. I know some fans say they just don't think there is any story left for her, but I just totally disagree. There is plenty of story for Jean. You just gotta have the right imagination.

If the series can focus so much on the actions and repercussions of the things that Scott and Logan do, than they should be able to come up with a thing or two for Jean freakin Grey. It doesn't always have to be Phoenix issues or love affair subscriptions.

Anyways, that is about it for Bits and Pieces. I was also gonna gab about the new series of Lego mini figures out, but I wanna do some more research. Take care everyone!