It's been almost two weeks since Halloween, but it's never to late to discuss how the night went! So click the link and learn more about a night of spooky fun and those damn cheeks...


I don't usually go all out for Halloween. True, I purchase candy and Halloween toys. I might wear orange or a cute Halloween themed necklace or earrings, but that's really it. I watch horror movies all year round. Though I try to watch more during this time because it is a time I have long associated with spooky frights. After all, they don't call the series Halloween for nothing. (My brother and I did stay up late one night watching Halloween, Halloween 5, and Halloween 6) But I don't usually do the whole dressing up and stuff. In fact, even growing up it'd be hit or miss for me in the costume department.

One of my best friends celebrates his birthday on Halloween. Like he was born on the holiday, so that's another piece that makes the holiday slightly different for me. Usually we are out going to dinner and celebrating birthday wishes, not so much with the trick or treating.

However, I do love Halloween. There is something innocent and fun about it. I enjoy the holiday because it is the great kickoff to the slew of holidays that follow with their time honored traditions. Last year was a rough holiday season. Not to sound like a broken record, but my marriage ended at the beginning of November. I ended my marriage. I walked away because I was with the wrong person. This wasn't one of those fleeting, "Love is new and fresh, surely this feeling is just a phase. Put some elbow grease into it, marriage is work." Marriage is work. And I was willing to work on it forever, but there are a few things that make it hard to work on a marriage. That namely being lies and betrayal. So I walked away because I wanted something true and real. If I remain a single old toy lady for the rest of my life I will be fine because I know that my single old toy lady life is true and real. I can't even begin to express the pain I went through last holiday season. It was awful.

So I see this holiday season as a fresh new beginning. A chance to make it right, to enjoy the ones I love dearly and to find peace within myself. The plan so far has been simple. I was going to really go out and celebrate Halloween. I was going to do it up big. Two years ago I had purchased a Pizzazz costume from Jem and the Holograms. I didn't get the chance to wear it because the wig that was part of the costume was atrocious. We are talking majorly horrific. I can't even begin to explain how shitty this wig was. Just God awful. Pizzazz herself would have plotted to kidnap it or steal its record sales.

Thankfully I was able to come across a green wig on eBay that was going to fit the bill. And thus began the Great Pumpkin Charlie Brown. Just kidding, Charlie Brown was not a part of this costume. So, for those who were wondering how my costume turned out and do not happen to follow me on other forms of social media, I thought I'd share some pictures of me dressed up as Pizzazz. 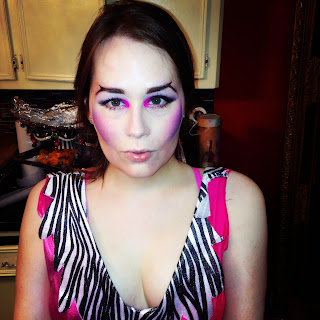 This is pre-wig. I was so proud of my make up. See, working at a cosmetics counter totally paid off. I was so nervous I'd look like a fool, however, I was going for a modern interpretation of the Pizzazz look. I filled my brows in and then using a fine brown eye liner pencil, drew some sharp lines at the top corners of my eye brows to give me the look of evil! I used an assortment of eye shadows to get this 80's glam smoky eye. I began with a light orchid shade from Clinique. Then I layered some deep grays, purples, and black all by Tarte over my upper eye lids. I rimmed the bottom of my eyes with a shimmery pink pencil from Elizabeth Arden. To cap it off I highlighted the inner corners of my eyes with a shocking pink by MAC. Mascara was also used.

The cheeks were another story. I used a thick postcard as a stencil of sorts for the harsh blush lines that Pizzazz has. A bold purple eye shadow and a bright pink blush were blended and brushed on for a really nice effect. As my dear friend Kal likes to point out, I have great cheeks, but this effect really accented them even more. It was just fantastic. Oh, and before I forget, my lips were lacquered with Candy Yum Yum by MAC. Seriously, Candy Yum Yum makes me feel like I could take over the world. 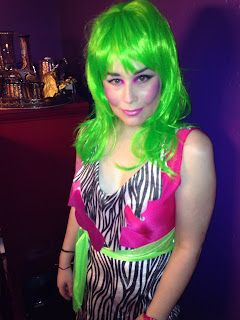 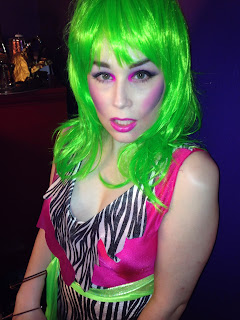 I had green hair though! I felt Pizzazz ready. My brother also wanted to be a dear and take some fun pictures of me. I was having so much fun. I always admire folks who can do the whole cosplay thing, and this is probably about as close as I will ever get to that. I did feel a little naughty though, like at any moment I was going to meet Eric Raymond and hatch a plan to destroy the lives of innocent do-gooders all so my next single could be number one. I was just missing my Roxy, Stormer, and Jetta. 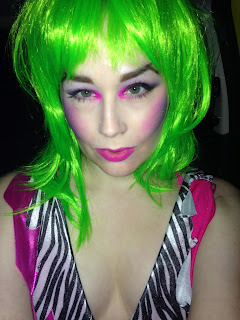 The plans for the night were quite a few. First stop was a party at my friend's house from high school. It was nice to see families everywhere and kids trick or treating. No one really knew who I was, but that was ok. Once I explained it a few people were like, "Oh yeah! Jem and the Holograms!" The problem with this costume though was that it was a little short in the back. Like, really short. There was no bending over for this Misfit. Also, the fabric was very thin and it got chilly that night. However, Pizzazz would never wear a jacket over this dress, so neither would I! 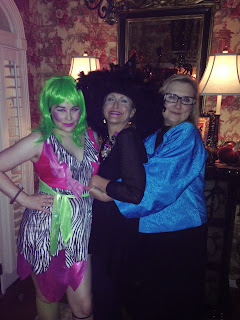 After my friend's house I stopped by my aunt's house. My aunt is in the middle and my mom is on the right. My family takes this holiday seriously. My aunt loves scaring people all year round and any excuse to have candy in a giant cauldron by her front door is good enough for her. They all got such a kick out of me dressed like this. They haven't seen me in a proper costume in years. Let alone a wig. They were all just so excited to see me having fun and being carefree. My family has been enjoying that a lot lately with me. It was a really nice feeling and I had such a great time visiting with my family too. 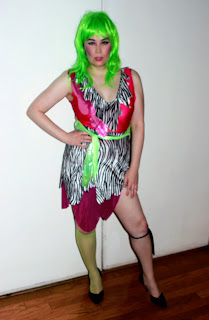 After my aunt's I had to rush back home to help my brother with his costume. He was having a problem gluing a lash on, so I was helping him. Once we were finished we took some time to take more pictures. I shaved my legs for Halloween, so I was going to show one of them off. The damn spirit of Halloween had better be glad.

After the picture taking, I sped off to pick my friend David up and we went out to dance the night away. Usually we celebrate Patrick's birthday on Halloween, but he was working an event that night so instead we just went dancing. 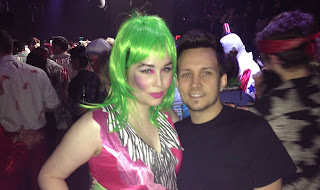 This is David and I on the dance floor. You can begin to see the early signs of wig fatigue as my real hair is peaking through. I must say though the twenty five pins really held most of the wig in place. I was doing some major dancing. I even ran into an old friend from high school that I had not scene in ages. I got to meet her husband and we just danced and laughed. Afterwards David and I met up with Patrick for a late night birthday dinner at a diner. Oh that diner food is just heavenly late at night isn't it?

Either way, this was a great Halloween. A real winner. It's a nice kick off to the holidays, of which I am really looking forward to this year. On a quick side note, to those who have left comments this past month, I have finally responded. I feel so terrible taking forever to respond to comments, I just get so busy and when I respond I want to take the time to respond, ya know? I have finally done that, like a month later. I'm so sorry bout that. Anyways, I hope you gals and guys are doing well. I've got all kinds of fun stuff coming up for the month of November, so stick around!