Alright toy fans it is time for an all new Toy Chest Tuesday! Today will feature a different type of toy that has not been discussed before on Toy Chest. I received an email from E. S. and he asked me a good question/request, he was wondering if I'd ever get to talking about old board game type toys. This got me thinking about Toy Chest Tuesday and ways I could explore the wonderful world of toys. I typically think of a toy as being an action figure or doll, but the world of toys is a very vast world. With so many possibilities to explore, I thought what better way than to share a set of my favorite games.

Today we will be looking at Flipsiders. Brought to us in 1987 by Milton Bradley, Flipsiders were little colorful cassettes that became travel sized or mini board games. Well I suppose some people could play with them in the car, but I never did. I always played with my Flipsiders in my room. Usually alone, but when I did play with a friend we would always forget the rules. So we'd basically make up our own rules on how to play.

There were many Flipsiders made in the late '80s and the line continued into the early '90s I believe. I mean, come on, fold out board games from a colorful cassette weren't going to stay on toy shelves forever. Anyways I had wanted to own all of them growing up, but sadly there would only be 4 in my collection. So let's look them over!

I never really cared much for racing games as race cars were not my thing, but the bright red plastic reminded me of cherry flavored Nerds. So it spoke to me on many levels. 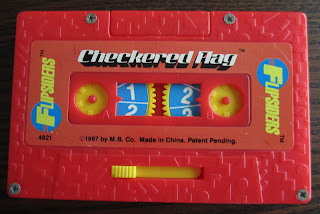 As you can see, Flipsiders really did look like cassettes. The board was folded up inside while the spinner took the place of the tape reel. Each Flipsider had different spinners depending on the rules and set-up of the game. At the very top was a compartment for the little magnetic pawns that players used for the games. These magnetic pawns came in red, blue, green, and yellow I believe. 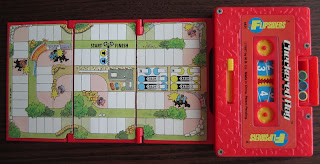 Here is the complete fold out for Checkered Flag. I honestly wish I had kept the instructions, because I have no clue about the rules. I can only guess that the goal was for two players to spin for a number to lead them down the race path. I am also guessing that something could happen that would involve the pawns going into the pit and missing a turn or something. This was the problem with me at the time, I didn't care for the rules so I just made up my own version of the game. Of course as I said, Checkered Flag was for mere decoration. I loved the bright red. On a side note there was an occasion where I placed a red and green Nerds candy up my nose. I kept breathing it upwards until I am guessing the candy went down the back of my throat. I would hate to think that some Nerds candy ended up lodged into my brain. Though that would actually explain a lot. 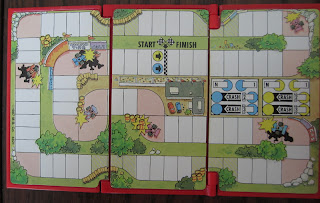 A larger photo of the board shows more details with the track. Cars are bumping into walls and sliding over oil. The board art does make the game look like fun. Of course that soon got old as pretending to drive a tiny magnetic pawn wasn't as fun as playing a video game like Rally X or R.C. Pro-Am.

Now this is where it becomes important for kids to stay in school. I grew up believing that the title to this Flipsider was "Copper Chase" instead of the accurate title of "Chopper Chase." 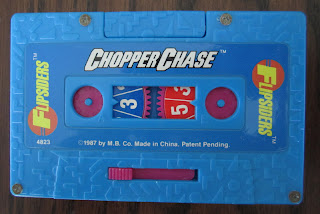 Chopper Chase utilized the pretty blue cassette casing with magenta spinners. One year I had asked for nothing but Flipsiders as my birthday gift. That was all I wanted, just oodles and oodles of Flipsiders so that I could have my very own brightly colored cassette collection. What I would do with all those Flipsiders was beyond me, but my hopes were probably something along the lines of, "I'll never be bored again with all my cool Flipsiders!" Be careful what you wish for, because Chopper Chase bored me to tears. I got Chopper Chase for my birthday (I believe most of my Flipsiders were birthday gifts) and at that time in my life I wasn't really interested in paying attention to the finer details, like, what the point or goal of the game was. Since I believed this game was "Copper Chase" I thought it was a fun spin on cops and robbers, where the goal was to chase the cops. 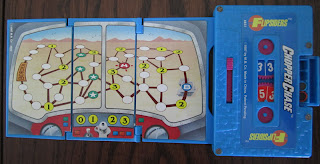 I was wrong. This game made no sense to me and that was when I actually had the instructions. The board looks like a very intricate math equation. I was just lost. The only thing I understood was that the players were in the point of view from inside a helicopter. 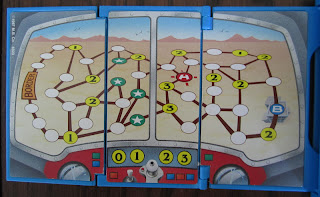 I mean look at all that. Doesn't that look like a mess of a game? I say that, and watch Chopper Chase be the most popular Flipsider in toy history. If anyone remembers how to play this game, please comment down below.

Now we are getting to the good stuff. I've always liked the idea of singing and being in a rock band (thank you Jem and Garbage) but I can't carry a tune to save my life. Rock Tour allowed me to dream big. 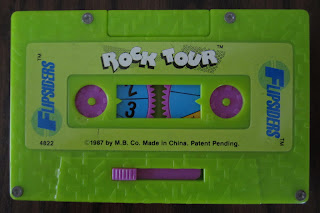 I loved this Flipsider because it was the same color of Pizzazz's hair. It was so gaudy and loud. The font for Rock Tour screamed that the player would have an awesome time playing this game. This game was out around the same time that Jem and the Holograms was on television, so I closely associated this game with the cartoon, even though they had nothing to do with each other.

Again, I have no clue what the rules were for this game. I really suck at chronicling toy history. But my guess was that the red and green players were on a world tour. The spinners helped move them along their global tour with the final stop being in New York. 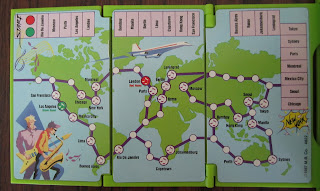 Everything I learned about world geography came from Rock Tour. I learned that there were some cities not worth mentioning on a map. I also learned that everything could be connected with a giant purple bridge. Finally I learned that New York was a nice destination for everything. Which was important because I grew up with salsa commercials telling me that salsa from New York City was somehow tainted and bad. Good salsa must come from Texas the old commercials would say. It was all so confusing to me, because I believed that everyone's salsa was worth eating. So thank you Rock Tour for making me aware of the world on a global scale. It's not all about Texas. (But seriously, watch Dallas on TNT Wednesday nights. Check your local listings for times, and while you are at it, make a wish for Victoria Principal to make her return as Pam Ewing. Dallas misses her.)

I bet you can't guess which Flipsider was my favorite. Ok, ok, I'll tell you... 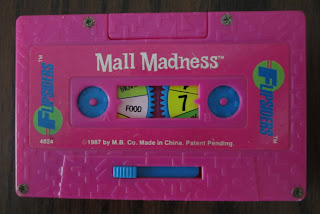 Oh Mall Madness, how I loved thee. This game was worth owning for the pink plastic alone. I like to think of the mall as my second home growing up. We were a mall family. My brother and I would go to the mall every weekend. We'd even go sometimes during the week day before public schooling disrupted those plans. Needless to say the Mall Madness Flipsider was pure enjoyment. 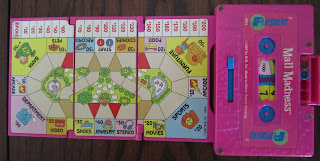 Now don't get it twisted, this Mall Madness was based upon the original large sized board game of the same name. I had always dreamed of having full sized Mall Madness board game because I believed that if I owned a mall board that it would somehow open a portal to the actual mall, thereby granting me access to every store imaginable. This is why my parents never wanted me to own the full sized Mall Madness game. Their rule was, "We'll buy board games that the entire family can enjoy." (How could people not enjoy a game of Mall Madness?) So that meant my family owning games like Clue, Sorry, and Life. Playing Life at the age of 5 was awful. Just awful. (Nowadays I'll play the hell out of that game.)

Anyways so the purpose of this game was simple, you start out with $200 and slide the spinner to lead in the direction of the various stores, where you spend, spend, spend and spend. Until you are broke. Is it sad that I knew what broke meant at 5? 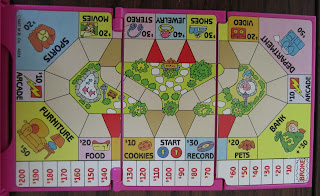 I loved the layout of this board. It was a mall! This game actually taught me a valuable lesson in making sure to map out your surroundings. I use that tool to this very day when I find myself in a mall or any exciting store. I feel that when you have an idea of where to go, you maximize the damages. My favorite stores in Mall Madness were the record, jewelry, and arcade stores. I also loved the food section too. (Hello, my ass used to rip the pockets off my jeans. I loved the food court.) The Pet store was never that enticing. Remember when pet stores used to be in malls? That whole section of the mall would always have the worst smell. I am nauseated just thinking about it. 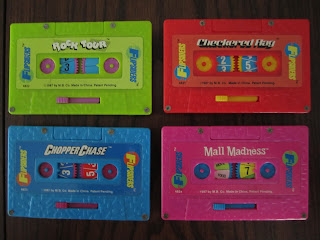 So here we have them all together. I wish I had collected more of these. There were so many! I seem to recall some teal, orange, and purple Flipsiders that I wanted so badly. Not to mention a few other ones that were in varying shades of pink. I didn't really play with the actual games that much, but there was something fun about owning these bright cassettes. I felt grown up. Like, "Hey check out my cool cassettes. They have no audio at all, just a board game. But I'm still cool." Ah Flipsiders. Hey, I still own these things but I couldn't even tell you where my old audio cassettes and mix tapes are. That's gotta stand for something right?