So click the link below and let's see what we can come up with.

What does it all mean? Well... it could mean anything! And since I have already told some (hopefully) cool stories on this diary, I thought it would be fun to tell even more stories that are cool and involve my brother. (Hence my use of the bro part of the topic) Those familiar with this diary will recall that my brother and I have traveled back in time and he has joined me on a slew of adventures in my parent's Tri-Attic System. Needless to say my brother and I have a ton of fun stories ready to be told for your reading pleasure.

There is one thing that one must know about my brother though: he loves to pull pranks. Especially at my expense. For as long as I can remember my brother has always been up to some shenanigan or another with the end result being for me to jump a mile high out of fear. Take for instance this one time when we were younger:

Growing up I desperately wanted a baby brother. I thought it would be the coolest thing to have a baby brother and to be like a little mom to him. Eventually my parents finally got with the stork and when I was 6 my brother was born. Having a baby brother became a dream come true. He thought I was cool when my peers did not. He liked that I had so many fun toys to play with, though he would grow up to not care much for toys in general. Either way, we always had each other's back. And we still do.

Before I became a raging hormonal bitch of a pre-teen I begged my parents for a canopy bed. I thought there was nothing more elegant and cool than a canopy bed. It was like the height of sophistication. (Since I had dolls and other toys all over my room I was not really one for being a barometer of sophistication.) My parents disagreed about my owning a canopy bed because they thought I was too young. So I compromised and talked them into a bunk bed. Why I needed a bunk bed I will never know. I didn't have any friends to invite for a sleepover. Also, a bunk bed was really a poor substitute for a canopy bed.

Instead I ended up with this giant bed in my room that was mostly useless. That is for the rare occasion when my brother would sleep on the top bunk. We'd stay up late at night giggling and telling stories. On Christmas Eve we'd sit up wondering when Santa Claus would arrive and if we'd finally get to see him. It was just a lot of fun.

Back to the whole raging hormonal bitch pre-teen moment though, things changed when I started... changing. It was no longer fun to have my baby brother sleeping on the top bunk. I wanted to be alone so that I could curse the world for entering me into adolescence. Soon the bunk bed became an eye sore, one that I would just pretend was a grand canopy. (No pretending was going to ever change the fact that the bunk bed was an eye sore.)

With dreams tarnished and life at an all time low, I became miserable. With acne. Of all things. With nary a friend in sight, I felt alone. Bitterness was setting in. So one night as I was trying to sleep with Alanis Morissette yelling in my ears, I called upon the Virgin Mary for assistance. I guess God and Jesus were busy. I don't really know why I was trying to communicate with Mary.

Actually, I have a quick disclaimer. I was born Catholic and was a die hard Catholic until I got older and eased into a different stance on religion and faith. My biggest guiding principle is to love and care about every walk of life and celebrate as much goodness as possible. I sound like a Care Bear. And that is just fine. I don't usually talk about that side of my life because... well... I just don't. I just want to love and embrace everyone. That says nothing and everything at the same time. Anyways, back to the story.

So I was talking to Mary. I had silent tears streaming down my face. I felt hopeless, adrift. I just wanted to know that I was going to be all right. By this point I was sobbing softly into my pillow, fearful that my life was over at the ripe old age of 11. All I could do was throw my thoughts out into the universe in await of a sign, "Please, just let me know you are hearing me right now. Let me know that I am going to be ok." This is what I was thinking to myself.

After I sent my thoughts out into the universe, a beam of light flashed across the ceiling slowly beaming down towards the floor, like a UFO. I stopped crying and my heart began racing. I thought I was dying. This was one of those moments that was beyond seeing Jesus on a piece of toast. I wasn't sure what to expect, but I felt faint. I had this chill run through me, the Virgin Mary was going to appear in my room and share with me how I would make my life work. I wanted to scream for help, to have someone witness this miraculous event with me, but nothing could come out.

I started crying all over again. It dawned on me that I was probably dying. That is when I heard a slight giggle from above. The giggle quickly turned into loud laughter and I was just so confused. What was happening? I didn't understand the world around me.

"M, are you crying down there?" My brother asked. He had been on the top bunk the whole time. I have no idea how I had never noticed him sleeping up there nor did I know why he had a flash light with him, but all he knew was that I was crying and seemed scared. To this very day I have no idea how I didn't know he was up there just like I have no idea how he knew to turn the light on at just the right moment. This was at a time when we weren't sharing the bunk bed so it made no sense that he'd be there. But as my brother put it, "I just like us being close."

Now with my marriage over and my brother working back in town again, we are both living back home for the time being, and it's like nothing has changed. We stay up late talking about our lives and what we are going to do with them. We tell stories. We gossip. We eat snacks after midnight. (Neither of us have turned into Gremlins... yet) I'm very lucky to have such a great relationship with my brother.

He still scares the crap out of me though. My new room at my parent's house is in their loft. Their loft was originally a game room with pool table and all kinds of antiques. Through the years it became a storage room and now it is my room. (Most of you have probably seen the pictures of how I have been trying to set everything up.)

Either way, there are still crazy stories unfolding. Just the other night my brother was talking with me in the loft. He was in awe of all the crap I own, "I just get stressed looking at all this stuff. What are you going to do next?" We kept talking and before he left he wanted to play with this antique phone on the wall. The phone is like from the turn of the century. Not this century, but the last. Callers would have to turn a crank to hear anything.

So my brother thinks it cute to turn the crank and place his ear to the receiver, to which he says all wide eyed, "M, I hear a voice on the other end." He said it with such seriousness that I started to panic, "Are you serious? What do you mean?" He placed his ear on the receiver again, "Oh this is weird! I can hear voices on the other end. I'm being serious."

I instantly started shaking, "Stop. Stop this now. What are you saying? Are there really voices?" My heart was beating so fast. I thought ghosts were going to seep through the walls at any moment. I was so scared. Knowing this emotion to be evident, my brother dissolved into laughter explaining that he was trying to scare me. Mission accomplished. "Don't scare me! I have to sleep up here!" What can I say, life has been beyond interesting since returning home.

Here are some pictures of my brother and me from the past few years. Here's hoping we have even more cool stories in the future. 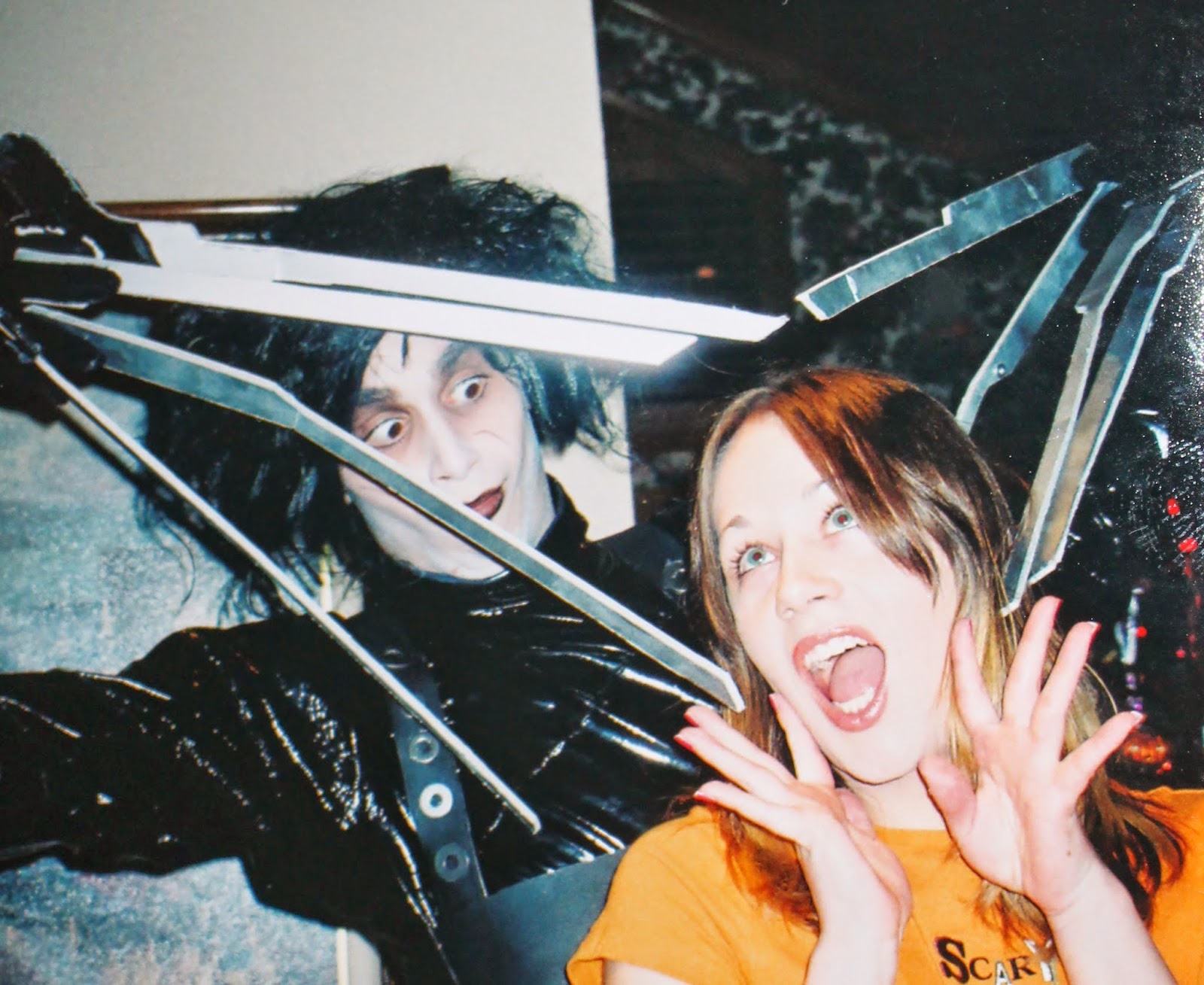 Halloween a few years ago. 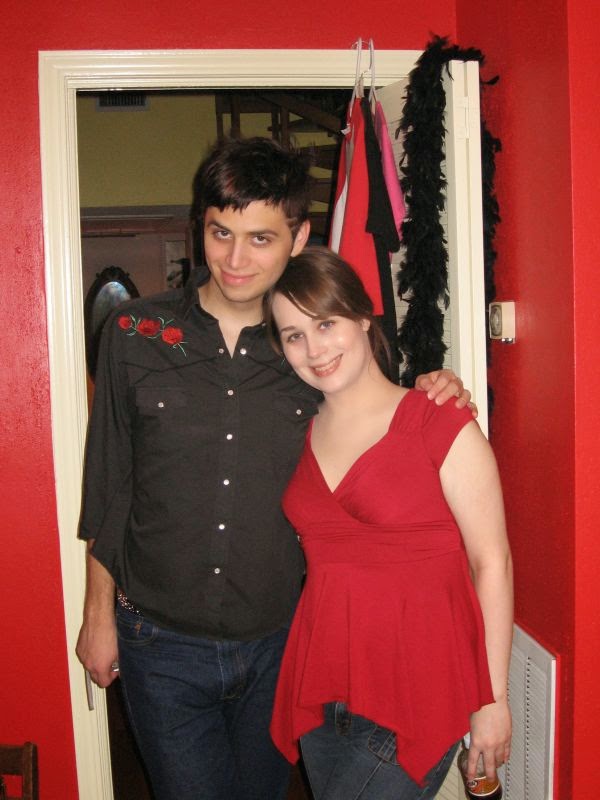 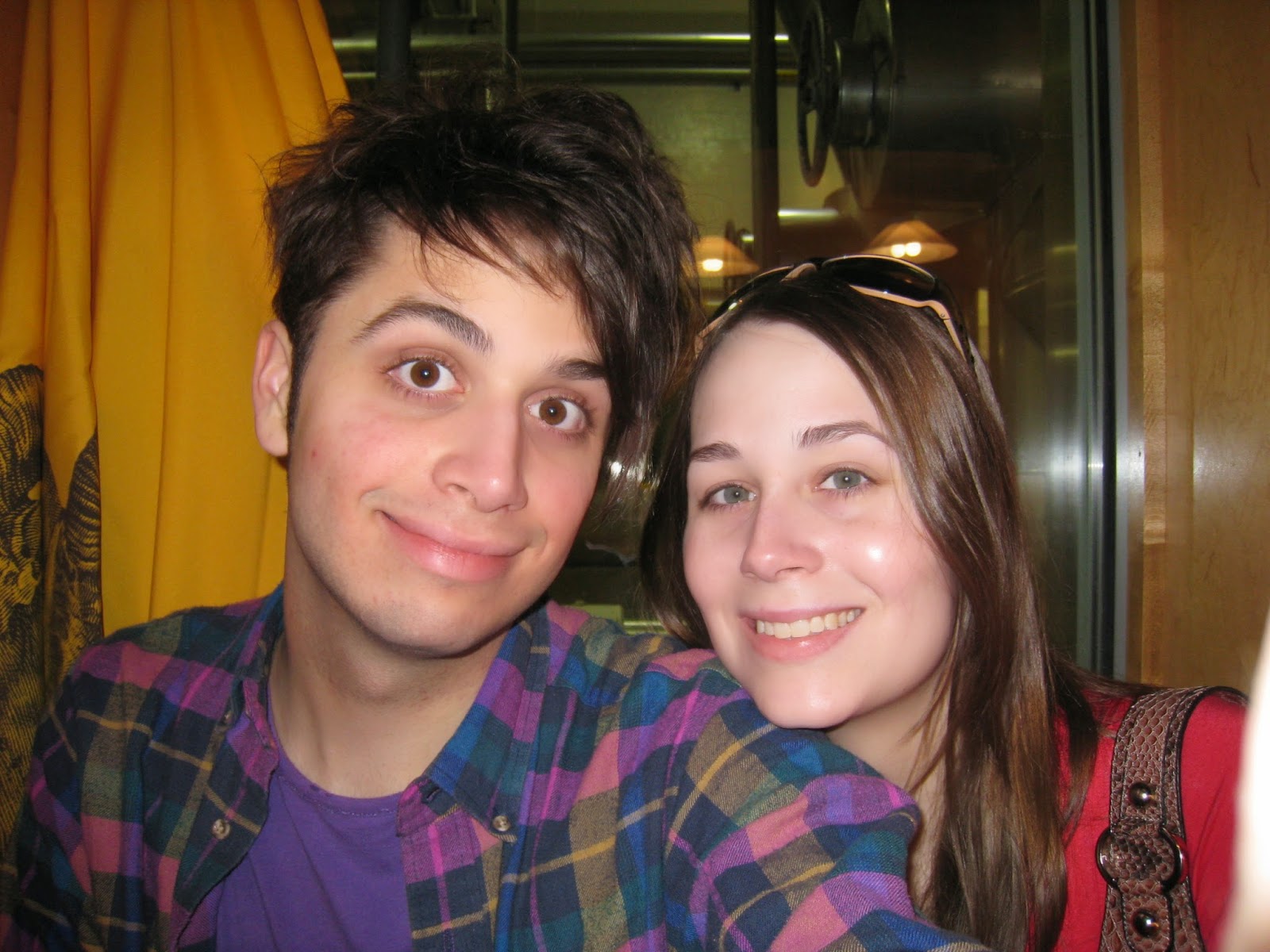 On a trip to visit family in the country. My mom and aunt wanted to stop at a brewery. 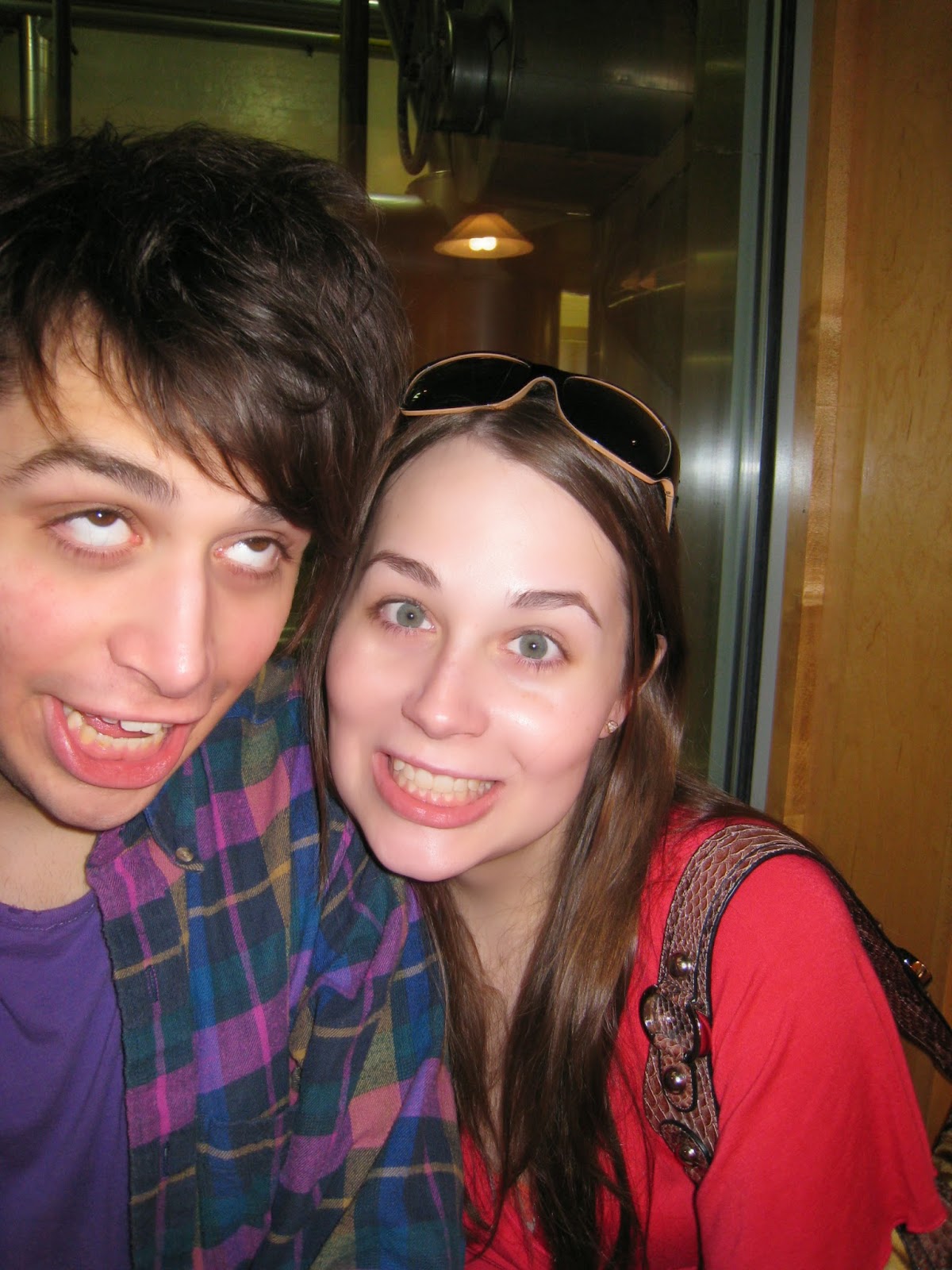 We were bored so we took goofy pictures. 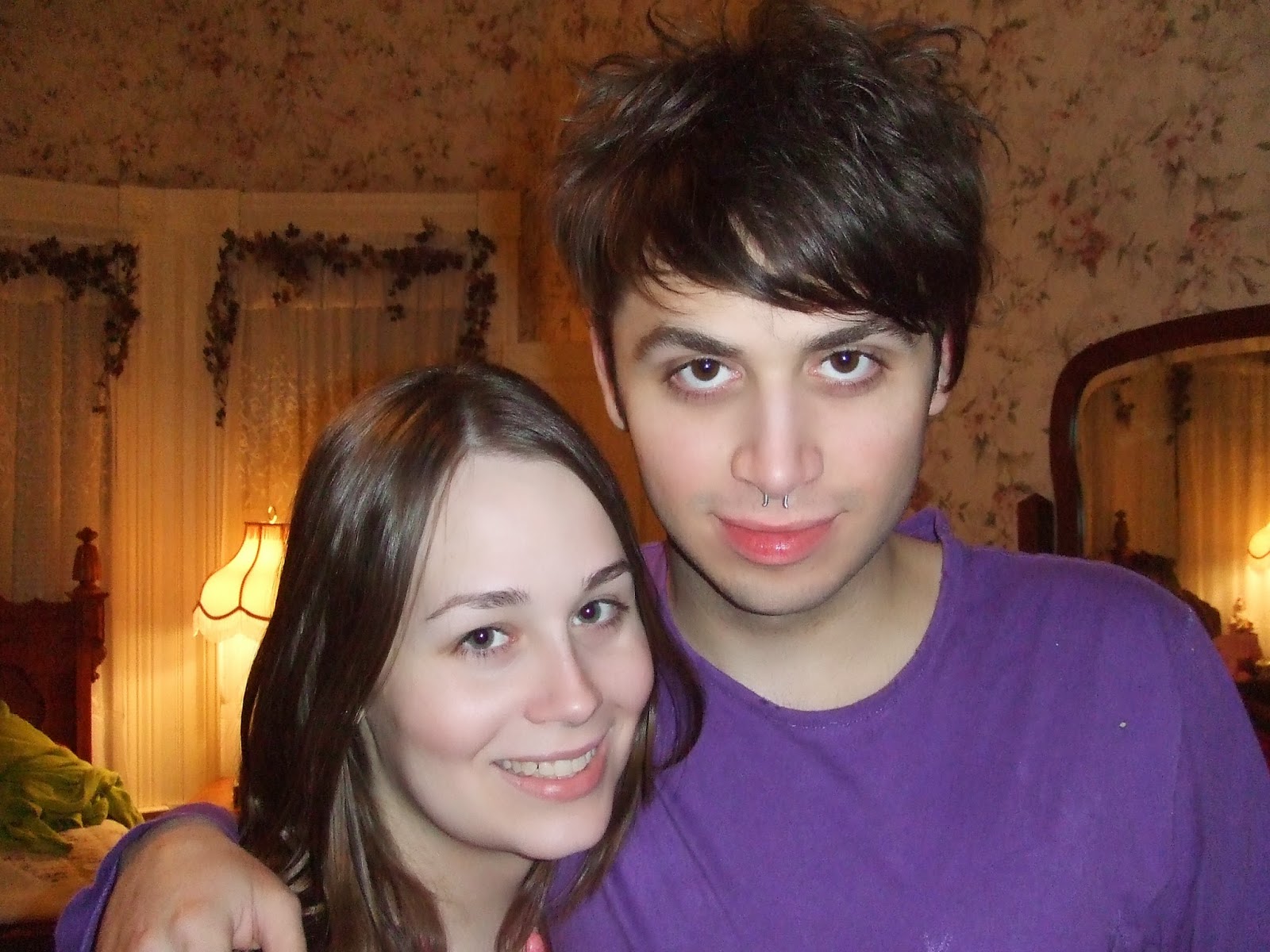 Just hanging out at the bed and breakfast in the country. 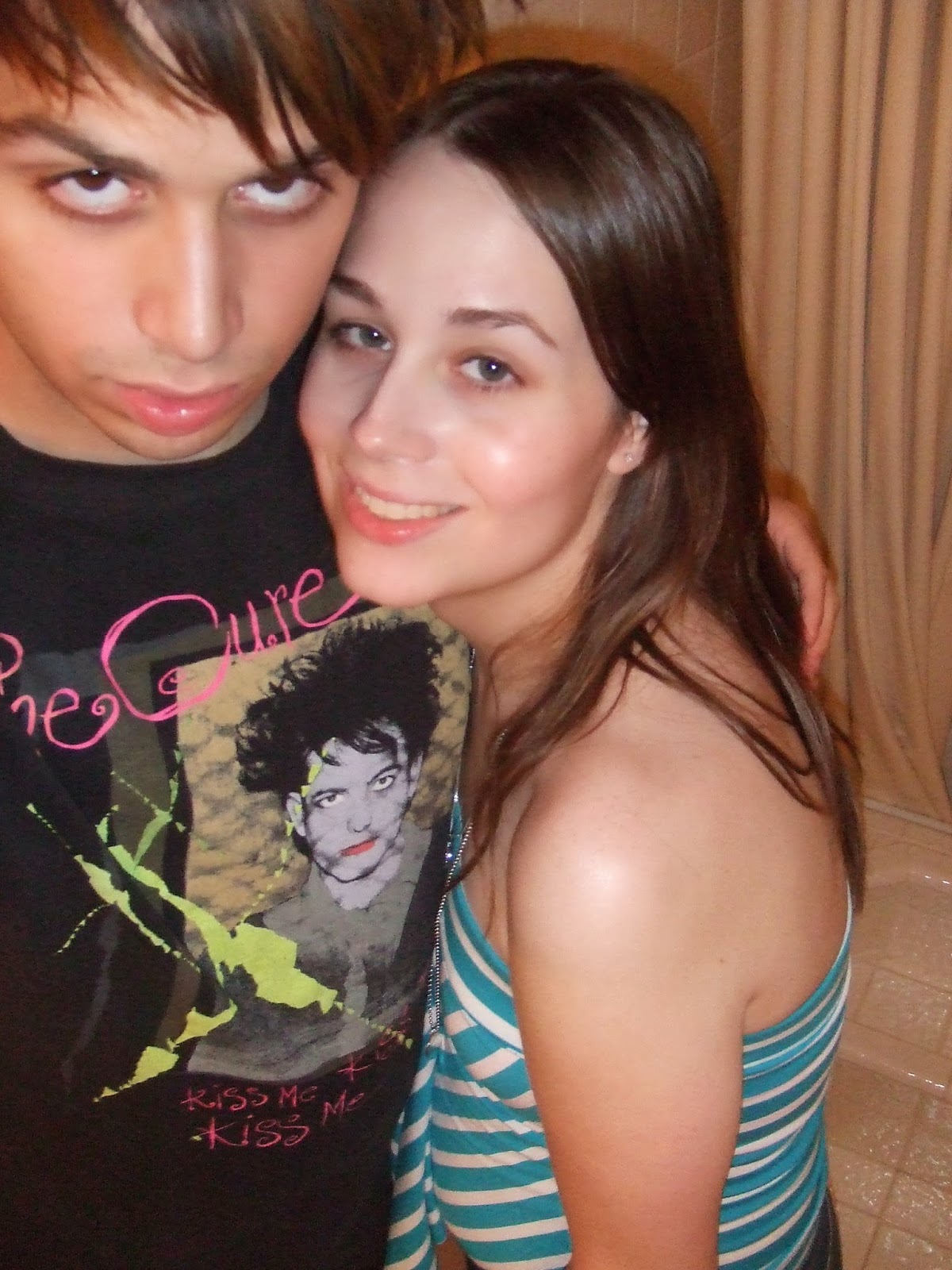 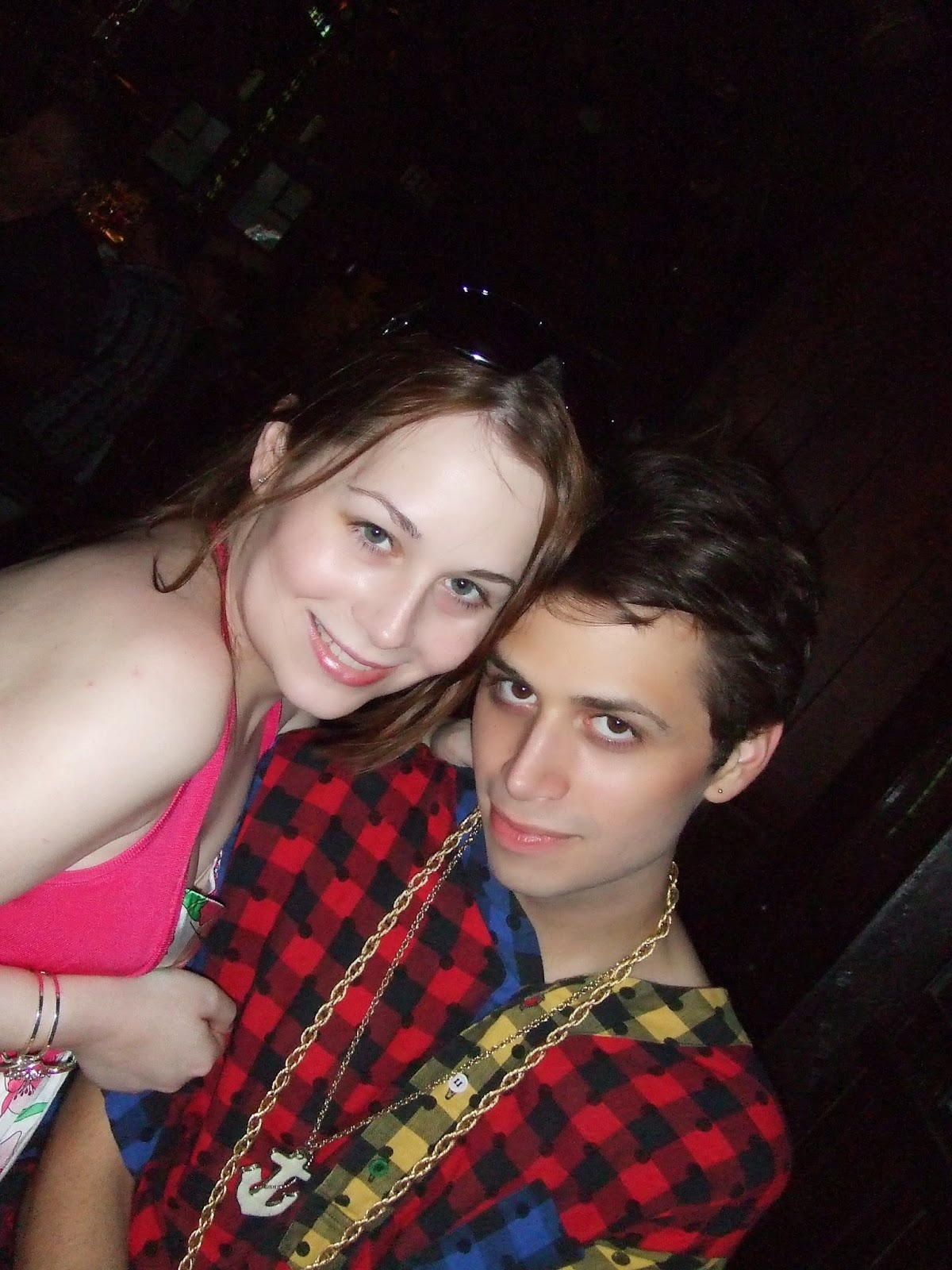 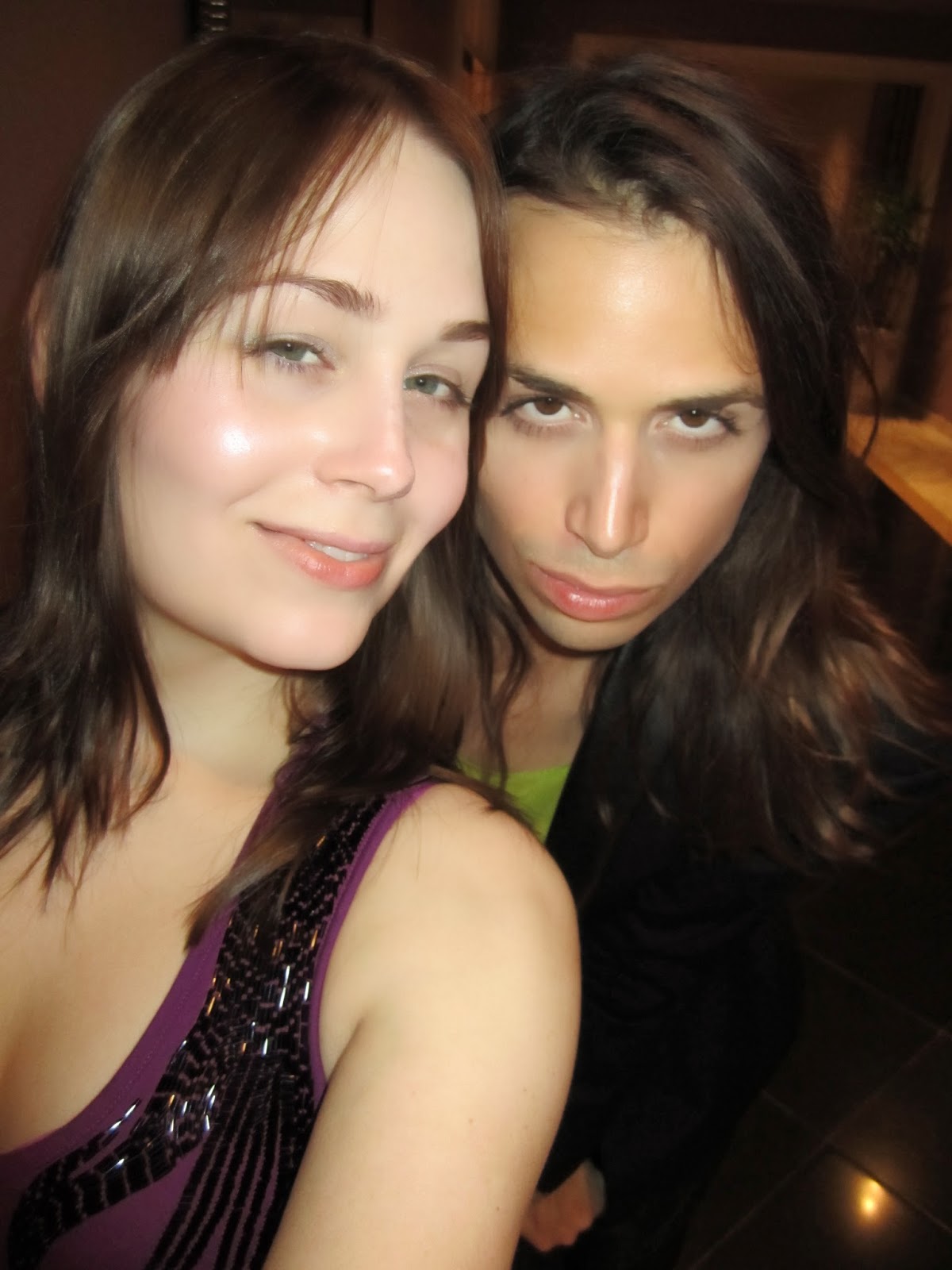 Trying to perfect the sibling selfie. 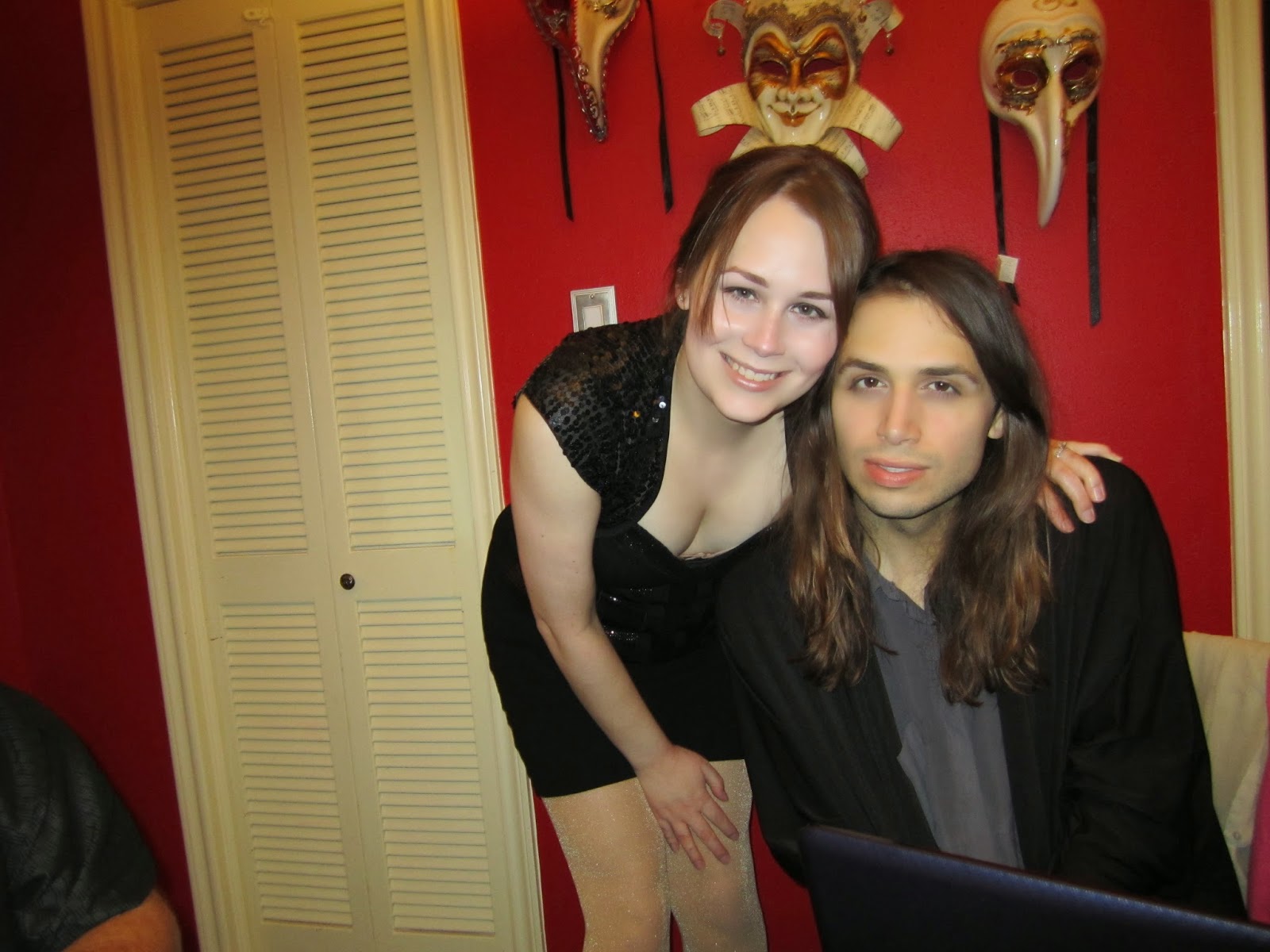 Chilling out during the holidays in 2012. 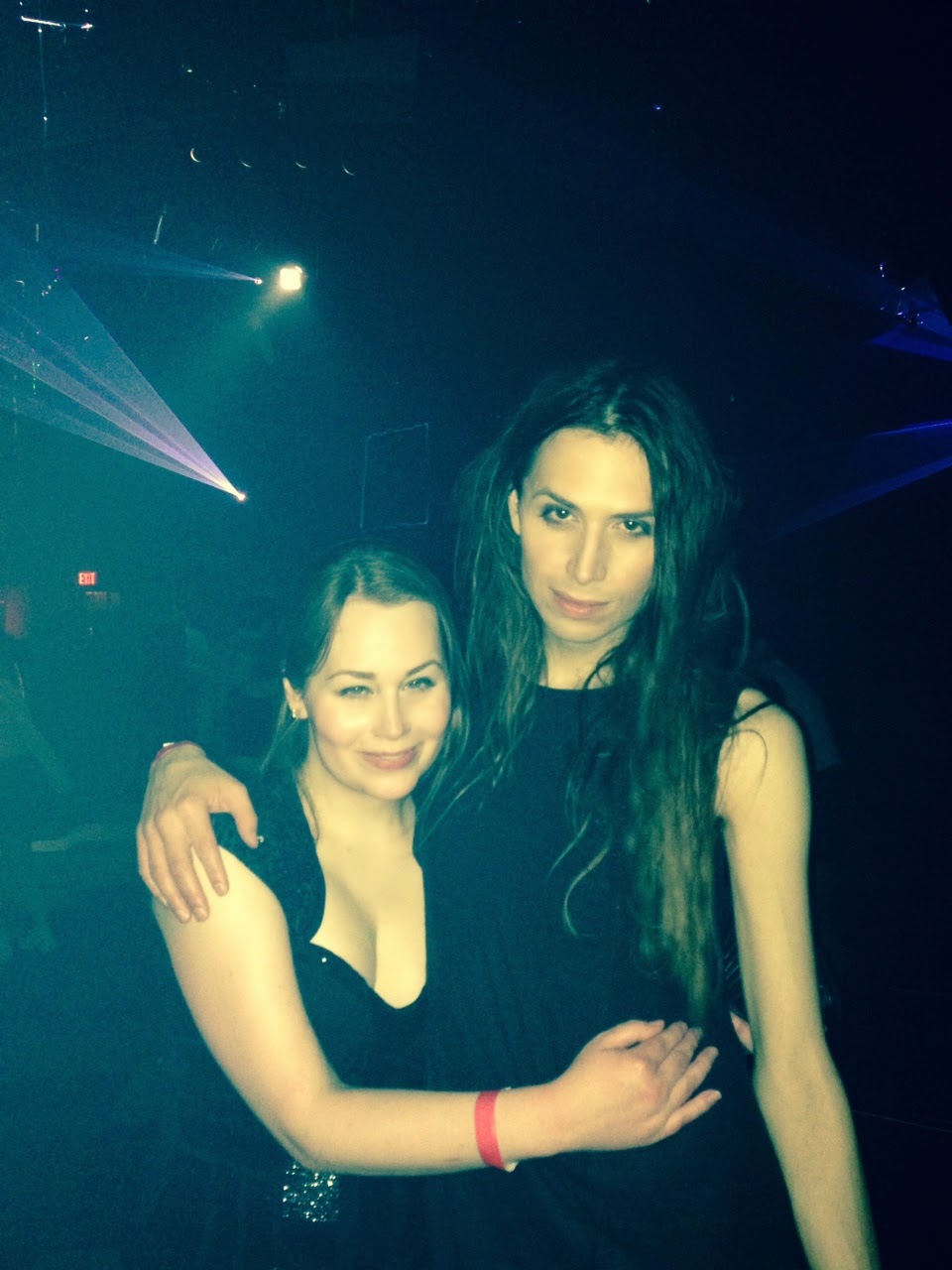 Out dancing a couple months ago.

Check out some other cool stories, bros and gals...

For more information on the League of Extraordinary Bloggers, head over to Cool and Collected.

And up next on the Diary...

*I look at some birthday surprises
*Trolls!
*Even more fun stuff