Hello fellow toy lovers! It is time for another fun edition of Toy Chest Tuesday! Today we will be looking at Mysteria from Filmation's Ghostbusters! Now there is some history with this Schaper toy. For those not in the know, Filmation was a studio that made some amazing cartoons in the 60's, 70's, and 80's. Does He-Man or She-Ra mean anything to you? (It should.)

Anyways pay attention because what I am about to tell you is going to be more convoluted than a soap opera. Back in the 70's Filmation had a live action kids show called The Ghost Busters. It didn't last very long on air. Well fast forward to the early 80's, Columbia Pictures released the awesome film Ghostbusters and consequently wanted to make an animated series based off the film. Now Columbia completely forgot that Filmation had the rights to the Ghostbusters name from their old 70's show.

For anyone with a degree in 80's history, there is no surprise which Ghostbusters cartoon became the most popular. The Real Ghostbusters completely proton zapped Filmation's Ghostbusters into a containment unit. However for a dorkette like me, I liked both. I thought they were a lot of fun. And, the biggest thing I liked the most out of Filmation's Ghostbusters was that the show had a larger female cast. Even though it was like 3 females. Whatever, it still beats lonely Janine stuck in a sausage fest. (Still love ya though Janine!)

I remember this whole Ghostbusters drama being a big deal when I was little though. There was serious talk in the neighborhood about which Ghostbusters show was better. There were constant debates about the coolness of the toys for each cartoon as well. I tried to be the voice of reason and play up the strengths of both, and as a result started most of the debates in the first place. My goodness though, what a treat to have two different Ghostbuster cartoons on tv at the same time! Some of those bratty neighborhood kids needed to simply count their blessings, because now there are zero Ghostbuster cartoons on tv.

In terms of the toys, my preference tended to lean towards Filmation's Ghostbusters, because the girl characters had rooted hair. I loved rooted hair. I also loved the evil Mysteria! I never had the chance to own her when I was little, because this toyline was truly a blink-and-you'll-miss-it series.

However thanks to the joys of Ebay, I snagged one! And isn't she just fun?! 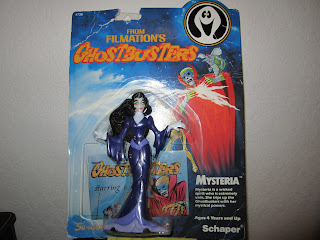 Her name was Mysteria, and as indicated on her card "Mysteria is a wicked spirit who is extremely vain. She trips up the Ghostbusters with her mystical powers." I love that she is vain. I mean if I'm going to hang out with a spirit, it had better be a vain one. Right? I also love that she looks like Morticia Addams cracked out sister. 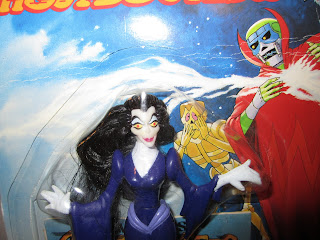 I mean look at that face! She is totally related to Morticia Addams. Or Joan Collins. 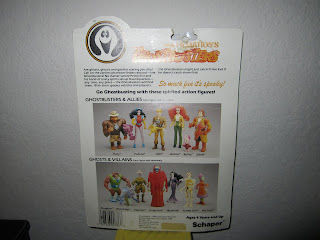 The back of the packaging had a whole list of the characters for purchase. Missing from the cardback were the really cool playsets available. 80's toys always had the coolest playsets. 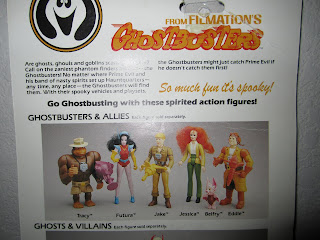 The Ghostbusters and Allies consisted of Tracy, Futura, Jake, Jessica, Belfry, and Eddie. I always had a crush on Jake. I just thought he was dreamy. Belfry also reminded me of a cross between Piglet and Hordak's Imp, before becoming evil of course. 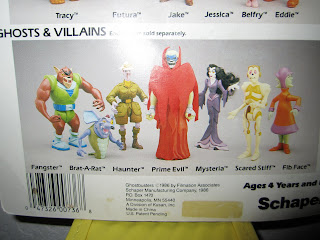 The Ghosts and Villains were Fangster, Brat-a-Rat, Haunter, Prime Evil, Mysteria, Scared Stiff, and Fib Face. I never had the villains. In all reality I only really wanted Mysteria. Wouldn't you? She is awesome! So until then dear readers take care! And get ready for Night of the Living Roach part 2: The Return!!! What will happen to the lovely Miss M this time?
Posted by Michael Lynn P. at 7:45 PM