Hello dear readers! Can you believe it is another Toy Chest Tuesday already? The week just seems to fly by. So today we are going to look at something really special. Princess Allura from Voltron: Defender of the Universe! Alright here is a little tidbit about Princess Allura, remember folks, every good toy needs a backstory. In the 80's I was the quintessential girly girl. Anything swathed in pink had my seal of approval. Those pink Barbie doll boxes? Sold. The card backs for Princess of Power toys? Really sold. And of course there was Princess Allura from Voltron.
I was not the biggest fan of the old Voltron cartoon, but I would watch it. The basic premise was that a group of space pilots each rode a specific robotic lion. The individual lions would join together to form Voltron, a larger robot that was the defender of the universe. Voltron battled against King Zarkon and his various robeasts that hailed from Planet Doom. (Not a place most people would go to vacation I imagine.)
Anyways each episode was basically the same. The pilots would face a new threat from King Zarkon, each one more strange than the last. The heroes would soon ride in their lions fighting and trying to stop the enemies until they'd need to form Voltron and usually split the enemy in half with Voltron's blazing sword. That was really it.
The toys were what really got me interested in the show. Most notably Princess Allura. I never had the Voltron toys when I was younger, but my cousin did. I loved playing toys with my cousin, he always had the coolest stuff. Of course I never understood why he wanted Princess Allura from Voltron. I was like, "Clearly Allura likes pink. As do I. So therefore I should get to keep her." I was a bit of a diva. I'd beg and plead for him to give me his Princess Allura toy. I'd even offer to trade my own toys for her. However my cousin was not interested in Day to Night Barbie, Sweet Secrets,  or my assortment of She-Ra dolls.
Looking back I can't even believe I would offer to part with my She-Ra dolls for Princess Allura. That is just crazy! Anyways time marched on as it always does and I eventually got over not having a Princess Allura toy. Now fast forward to the present. As an adult with computer access to Ebay, it was only a matter of time before I would buy my very own Princess Allura figure! And here she is! ﻿ 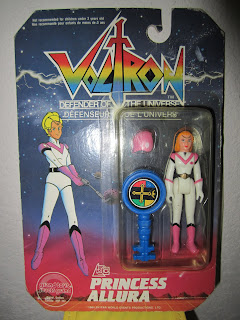 This is the package she came in. Allura comes with a helmet and lion key. When I got this I was slightly let down, I had forgotten how small she was. Other than that, I think she is awesome! 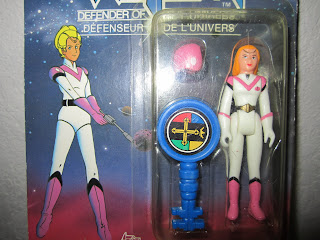 Here is a closer picture. I loved the pink boots. I have also had a very difficult time deciding if I should open her or not. I feel like it would be awful to open such a national treasure. Plus with Mattel revisioning the classic Voltron toys in 2012, it might make more sense for this vintage find to stay minty fresh. 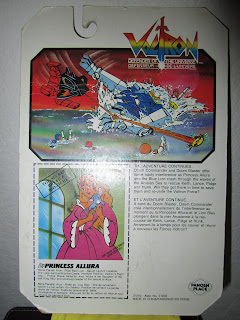 This is the back of the package. The top picture is an adventure scene depicting a Voltron story. There is also a bio card of Allura in her traditional gown. She is seen holding a space mouse, which were actually really cute from the cartoon. I don't normally tend to like mice or other rodents, but I could actually keep a space mouse as a pet. Well probably just a toy version. 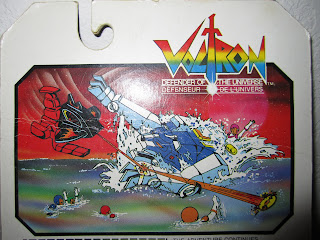 Here is a larger picture of the adventure scene. In it we find Allura piloting the blue lion into the Arusian Sea to save her friends, Keith, Lance, Pidge, and Hunk. Hunk was my favorite guy character. He was actually a hunk, his name described him perfectly. I always thought he was cute, and he is sooo adorable in the new cartoon. I also realize how sad it is that I find a cartoon character to be cute. I also love that Allura crashed into the sea and is waving to her friends as if to say, "Hey ya'll! I just crashed into this body of water to save everyone! Let's party!"
Anyway here is my thing about Allura. I recently began watching the old episodes of Voltron in preparation of the new Voltron on Nick Toons. I have to say, vintage toon Allura is incredibly annoying! I was like, "Say it ain't so!" Ok so the original five pilots were Keith, Lance, Pidge, Hunk and Sven. In the beginning these guys get into the lions and have no problem driving them. They could drive the lions in their sleep, no big deal. Got it?
So something happens to Sven and he ends up out of commission. Naturally Allura steps in to pilot the blue lion. Now explain to me why homegirl can't drive for nothin! For like the whole first season she can't drive the blue lion at all and just wrecks a bunch of shit. I'm like really? Why does the only main girl on the show have to look like she can't drive the blue lion? Especially when these lions come from her home planet! Shouldn't she already instinctively know how to drive them? Really?
Stuff like that annoys me so much. I know at the end of the day it doesn't matter because it is an old cartoon, but girls need to represent in these shows. Silly me-as-the-fool ends up in life or death debates with hulking nerd guys and there is just no way I can justify Allura as being the coolest lion pilot. Those rough and tough nerdy guys just chew me up and spit me out. Come on Allura, get it together!
Thank goodness she seems to have some more sense and skills in the updated cartoon. I mean really. If She-Ra can pick up a large Horde ship and throw it across the galaxy surely Allura can avoid crashing the blue lion into the side of a mountain. That's all I'm askin for. 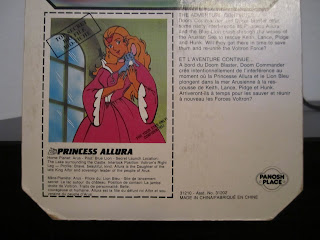 Here is another larger picture of Allura's bio card. Her home planet is Arus. She pilots the blue lion. The secret location of the blue lion is at the lake surrounding her huge castle. The interlock position of the blue lion forms the right leg of Voltron. Personality wise she is brave, beautiful, and kind. (And she can't drive.) She is also the daughter of the late King Alfor and is the sovereign leader of the people of Arus.
On a related note, let's look at the timeline between the old cartoon and the current one. I think she totally hooked up with Keith and Lance. I believe with all my heart that the red headed girl on the new cartoon is actually Allura's daughter, not her niece! I see so much unanswered longing and tension between Allura and those two men. I can see it now, they both loved her and she got to business with them both. One of them knocked her up and she ran off to give birth and has been lying that the baby is her niece. I mean Allura has no siblings! How can she have a niece? That is her daughter! See this is what growing up with All My Children and One Life to Live does to a person!﻿
So that is it for this edition of Toy Chest Tuesday! I'm thinking of doing a new profile on toys too! It is tentatively going to be called "Trashy or Timeless?" I plan on looking at certain toys and dolls from my collection and letting us ask ourselves the most important question, is it trashy or timeless? Get ready folks, it is gonna get real dorky, real quick!
Posted by Michael Lynn P. at 8:46 PM