Hello dear dorky folk! I got some nice responses to a feature I started a couple weeks ago, so I thought I'd post a new one! I absolutely love the little bio cards that are on the back of various action figures and toy lines, so it just makes sense to do the same thing for all the wonderful readers who I have gotten to know. To get caught up, click to read about the first Clip 'n Save Reader File- Sarah. Sarah paved the way for this idea and I can't thank her enough for sharing pictures from her collection. Now if only we could get a toy company to make action figures of all of us... Wouldn't that be the coolest thing?

Anyways, today's Clip 'n Save Reader File comes from a friend of mine that I think is just the nicest guy. So let's find out a little bit more...

2. How long have you been collecting?  Too long--probably...however, I got into seriously collecting in the early 90's when I stopped playing, I think I always loved action figures and such because they were like little statues and pieces of art.

3. What do you collect?  Too much...I have a large collection of action figures, modern and vintage 80's properties such as G.I. Joe, Masters of the Universe and Transformers.  I have a vast collection of Batman (Animated series, The Batman, and others).  I also love Japanese Anime and have many DVD box sets and a selection of figures.  I'm a Hatsune Miku and Black Rock Shooter fan (a fandom of these can get very costly)!  I like a bunch of other random figures such as Voltron, Air Raiders and even some Monster High, Jem and whatever else catches my eye.

4. Any Toy Regrets?  I do, my most depressing story--shared for the first time with your Dorkette readers.  I worked for a big retailer for many years and at holiday time we got in a small selection of toys.  I was opening boxes and filling the shelves and I had opened a case of "The Batman" figures.  I despised the cartoon at the time (mid to late 2000's) and I thought nothing of the figures.  I remember Penguin, Man-Bat, Firefly and Bane, I looked at them and said to myself, "kind of neat, but no."  And I forever regretted it because over the last few years I've come to love "The Batman" and have been collecting the figures and paying up the nose for them because I was too stupid to not just pay retail with my store discount and let them sit until I realized how much I would love them.  Now your question made me cry...LOL!!!

5. Favorite toy property (vintage or new) and why?  I have to say G.I. Joe; both new and vintage--more-so new.  I love the 2007 and after figures because of the details and the female figures having anatomically correct bodies.  I love the articulation and the packaging is just great.  I do not care for the Retaliation line though, but I'm not one of those people who has to get everything from a line, just what I really like.  I liked the vintage so much because when I was a kid I could afford a couple at a time, the cost was just a few dollars and I really enjoyed them, I still  have a bunch left even if they are a little worse for wear.

6. If you collect, where do you normally shop for your addiction?  I think Ebay is where I get most of my stuff, the selection is best, however, and this will be free advertising, Bigbadtoystore.com has a good selection and decent prices.  My biggest secret however is: bonanza.com/booths/toyrareum.  Toyrareum has a great selection of vintage toys with great prices and service.  All right, where is my big advertising payment...Just kidding.

7. Any upcoming products that got you super psyched?  Currently, I'm settled with what is out on the market at the moment.  With letting the Masters of the Universe subscription go next year, I'm planning to collect vintage such as more Air Raiders, continuing my M.A.S.K. collection from when I was a kid with some boxed items.  I'm probably considering Bravestarr and returning to the costly collecting of Black Rock Shooter and Hatsune Miku.

8. Hollywood is finally making a female centered comic/sci-fi/super hero movie, quick, who do you hope it is?  I'm a bit scared to say Jem because it'll be another slap-stick like Josie and The Pussycats.  I love Archie comics (I have a huge collection of those too) so I wanted to see Josie and The Pussycats and I was pretty disappointed.  So, if they get the originals from the cartoon to write a live-action Jem movie and let them do it their way without any stupid new character and slap-stick, it'll be great.  The cartoon had such a great balance of action, adventure, drama and comedy that it was one of the best cartoons on TV for all ages and genders.  I'd do a clean story based on the Starlight House and how the band is always broke and desperate because they put every penny into it.  The last thing they should do is have one of them want to be rich and famous and leave or something that everyone would see coming.  A surprise would be a serious story with a good balance.  I'm tired of the band breaking up or selling out and learning in the end that friendship matters--its been done to death.  But, if anything, Jem deserves a comeback even if they don't think its worth the money.

9. Which toyline/cartoon would you like to see get a comeback?  Jem and the Holograms.  Just like question #8; I think if they did the cartoon correctly, it could be a great continuation from the original.  Most of the writers are still alive, so it wouldn't be hard to do.  As for the dolls, well, $125 is pretty steep regardless of the quality, I'd go for something that normal people could afford, not just some people because they just want money and could care less about what they are selling.

10. Biggest thing that bugs you about collecting?  The ridiculous costs from scalpers and sellers in general--yeah, I know everyone has to make money, but more often than not the prices become too over the top.  I think that is one of the reasons that I call ebay an archive because it allows you to see and possibly learn about figures and toys even if you can never have them.  Most millionaires don't collect toys, so good luck getting $5000 for something most people can't afford to buy.

11. Do you have a website and/or are part of a message board that you'd like to share?  I've been with NERDSociety.com for a few years now, come in and enjoy, many different topics to choose from including toys, new and vintage, DVD reviews, comics, ect...something for everyone!

12. Share your photos and discuss a brief bit about what we are looking at! 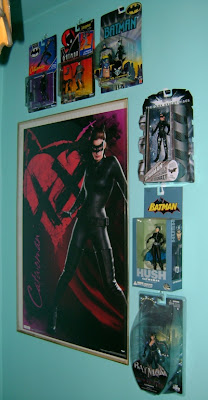 P1- "Catwoman wall" in the hallway at the top of the steps, featuring some of the nicer figures including the 2 pack with a Batman and New Adventures Catwoman. 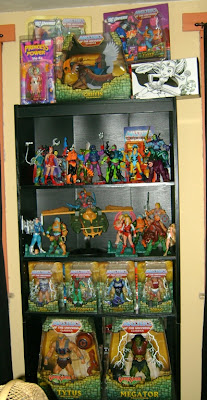 P2- A selection of Masters of the Universe, this is only 1 of 2 and a half shelves worth.  I'm not sure what to do with the Griffin though, it's there for now. The shelf changes almost every month. 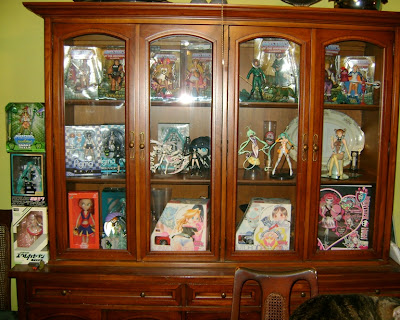 P3- The China cabinet in the dining room, featuring MOTU on the top shelf, middle shelf has Black Rock Shooter Figma's such as Mato a direct from Japan exclusive that was only made by the order, Dead Master, White Rock Shooter, Black Rock Shooter, BRS doll in the back, Hatsune Miku Figma in the back.  Ren from DearS statue with Racing Hatsune Miku statue and finally the "Sound Pretty" statue.  Bottom shelf with Kim Possible doll, KP snow globe, Hatsune Miku statue in the back.  In the middle are the very rare Transformers KISS Players figures with the beautiful watercolor artwork on the package, the first is Convoy (Optimus Prime) and Melissa, a Dodge Ram that changes into Prime and a figurine of Melissa, his human partner the surfer girl.  On the right is Auto Trooper and his human partner Atari, he is a Mazda RX 8 police car and changes into a robot; also included is the electrical being Kremzeek in figurine form and of course Atari.  The figurines can fit into the seats of the vehicles and "drive." Finally, on the end is the Walmart exclusive, C.A. Cupid from Monster High.  On the left are Snake Teela from MOTU, Hatsune Miku claw game prize and Anemone from Eureka SeVen in statue form. 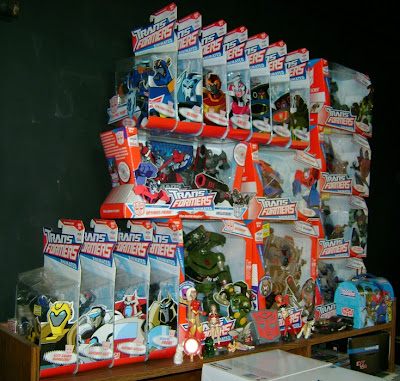 P4- My obscene Transformers Animated collection with assorted things on the front edge of the shelf.  I think I went to far--OK, you can never go to far... 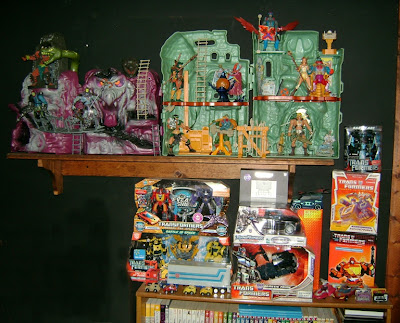 P5- Original Snake Mountain and Castle Grayskull from Masters of the Universe with 200X figures and 80's Roboto in the Grayskull throne.  Below are my really good Transformers including vintage mini cassettes.  The best pieces are the Nemesis Prime Alternator and Soundwave MP3 player which is classic blue, not white like the box shows.  Blaster is the big red box in the back.  On the shelf below are my Japanese Manga books--some are actually from Japan.

P6- A small fraction of my G.I. Joe collection.  The photo is not that great, but I couldn't get in front of it to take a good photo.  The top shelf highlights are the Starscream Skystriker which I almost sold, the Baroness doll in the black box with the red cobra symbol and the cancelled Cobra Commander mail-away in the red card with "Cobra" at the top.  The Christopher Eccleston Destro is one of my favorites. 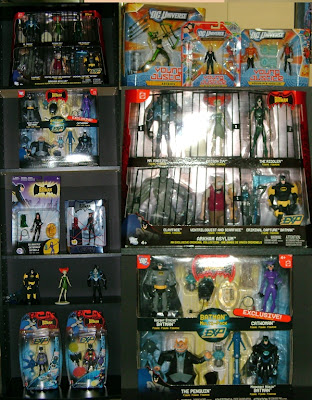 P7- Here it is, "The Batman" my rarest, most loved collection, featuring the variant Arkham Asylum set with the Ventriloquist and Mr. Snoots instead of Scarface.  The four pack with variant Purple Catwoman and of course Penguin.  Selina Kyle from the first series and the convention Catwoman with the great diorama package.  Loose Batman, Poison Ivy and Mr. Freeze and finally Batgirl and Blaster Batgirl with removable armor which allows you to see her face.  I also have the Target sets with Ventriloquist and Scarface and the set which features Poison Ivy.  I'm still working on getting more, but the ebay prices for certain figures are insane!!!  The top of the shelf has my small Young Justice collection of Artemis, Black Canary and Aquaman and Aqualad--the best version of Aqualad to date. I have so much more, but it starts getting really out of hand.  I hope your readers found this selection to be enjoyable.  Thanks for your interest in my collection!    -Paladin

So let's keep these Clip 'n Save Reader Files going! If you are interested in taking the questionnaire and sharing some photos, please email me at missmermista@gmail.com. You do not have to share your name; made up names are perfectly fine. Also I am always ready to add new questions to the questionnaire, so be sure to leave some feedback on other types of questions you'd like to see! So that is about it for now. I hope you are all doing well. Get ready though, Diary of a Dorkette is ready to announce a new Heroic Hottie for the month of September!
Posted by Michael Lynn P. at 4:02 PM