They're creepy and they're kooky, mysterious and spooky. They're all together ooky, the Addams Family (toys!) An all new Toy Chest Tuesday is ready to shock with cheap thrills! Well maybe not, but who doesn't love a new Toy Chest? I grew up watching reruns of the original Addams Family and thought they were just the coolest. I was also lucky to grow up in a time when the Addams Family had a big time comeback into pop culture with not only two movies, but an animated show and toy line to boot!

The 1992 cartoon was not the first time fans got an animated take on the Addams Family, but it was the first one for me. Playmates was responsible for making the toys, and goodness their toys were ever faithful to the cartoon! I remember seeing these in stores before ever knowing about the cartoon. I was thrilled to say the least. There was something just fun and quirky about the Addams Family.

I collected pretty much everything that was made for this line, and those items will be showing up soon. For now let's check out a carded Playmate's Addams Family figure: Morticia Addams! 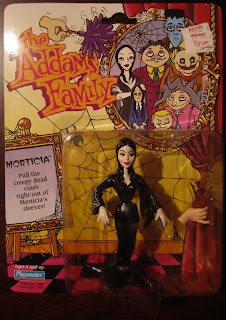 Morticia was my favorite. I loved her dress and her whole attitude. Her figure had a spooky action feature with dead vines coming out from her sleeves. She also came with a little Thing accessory. What I loved about her, was that her plant skills were sorely lacking, and it was ok. My green thumb is much like hers. Somewhere Perfuma is shaking her head at me in disappointment. 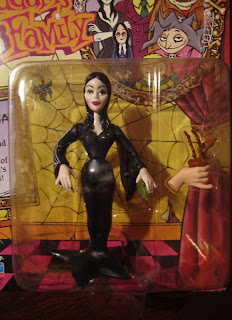 Each figure had an action feature and came with a Thing doing something or another. There was also nice articulation for the size of the figure. I personally thought Playmates did a fantastic job with this line, barring a few things. (A bit more on that later.) 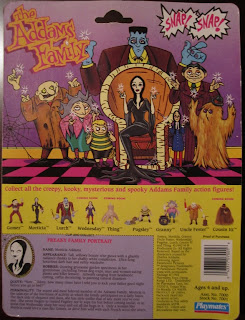 I loved the back of the card. There was a lot going on. The top featured the family in their animated finest snapping their trademarked fingers. Below the photo was the line up of figures along with the obligatory collector card, called a Freaky Family Portrait. There was no mention of the animated show, which has led me to believe that the toy line came out first. That, or Playmates just wasn't wanting to advertise that much for the cartoon.

The line up for the toys featured the entire main cast of characters, only there was one fatal problem. Three figures never made it onto toy shelves. Wednesday, Thing, and Cousin Itt were merely labeled as 'Coming soon.' They never came. (To my knowledge and endless searches, I never saw those three figures ever get released.) This is very interesting, because those three figures were essentially prototypes featured on the back of the card. This rarely happens with toys. I am sure there is a story, but I am not entirely sure what happened. The cartoon only lasted two seasons so Playmates could have stopped production on any new characters due to a lack of customers. I don't really recall other people freaking out for Addams Family toys, aside from me. But then again, I didn't really have much friends at the time. 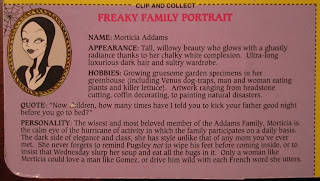 The Freaky Family Portrait was full of great details. I love how her wardrobe is sultry and her penchant for growing Killer Lettuce is just a common occurrence. I mean lettuce is a killer. Have you ever tasted it? I also loved how Gomez loved her. I always dreamed that is what love was all about. Speaking french and driving a man totally wild with head crazed lust. Now I am just lucky if I can prevent myself from falling and busting a hip. I guess Morticia had this sense of confidence and sexiness with a dash of macabre glamor that I really liked. Plus she has got to have the most interesting parenting skills ever.
This is not the end though for the Addams Family toys! Join me next week when we look at the line up all loose and fancy free! Be sure to also leave your comments. Did you collect these toys? Who was your favorite Addams Family member? Does anyone know why there was never a Wednesday released? These are the questions on my mind. I hope you are all doing well and keep it here! The week is just starting! Take care everyone!
Posted by Michael Lynn P. at 8:18 PM