Oh sweet Toy Chest Tuesday. How I love thee. This is the day of the week where I rummage through the archival room and find old relics from forgotten times. Well some forgotten times. Most of the time I am aware of what is in my collection, but every now and then I find things that I am like, "Hey! Wait a second! I don't remember owning this!" We'll get to that in a second, for now let's talk Voltron. This is not the first time that Voltron has appeared on a Toy Chest, but unlike last time, today we will be checking out some villains.

Growing up I watched the American version of Voltron and I liked it well enough. I mean it was no She-Ra, but I was hip and cool at 4, so I found time to enjoy it. What was better than the cartoon though was the toy line. My cousin had everything. The Lions. The pilots. The castle play set; like everything. I was in awe of his collection. Mostly because I wanted his Princess Allura, but that is neither here nor there. The only thing I knew was that I wanted some Voltron items. Of course my zest for Voltron came up a bit short. Once I was ready to buy items, there really wasn't much to find. Sadly Voltron had left the toy stores.

Thankfully there was Children's Palace (competition for Toysrus back in the day) and I had the chance to gather some Voltron folks growing up. So let's check out some pictures!


Haggar the Witch and her pet cat Coba 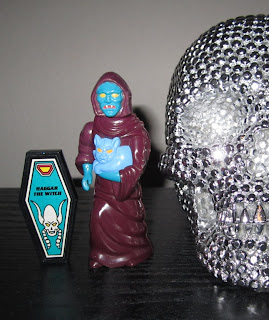 Released by Panosh Place, Haggar was a single carded figure and came with limited articulation. (Only her head and right arm could move.) She is already sculpted holding her cat Coba and she came with a little mini coffin clip on pin bearing her name (so all the cool kids could be fashionable.) Haggar was pure evil and shared some similarities with another witchy robed woman by the name of Shadow Weaver. They were both beauties that turned into "ewwies" after embracing evil. Though unlike Shadow Weaver, Haggar had no problem revealing her face. 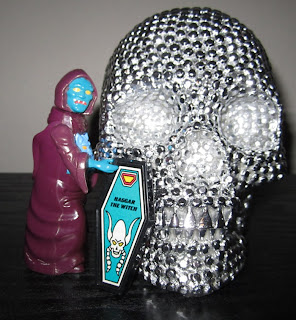 Now is it Haggar or Hagar? I have seen different spellings for the mega witch, but I have always thought it was spelled Haggar. The sculpting was very simple for this toy. Part of that was because it was 1984. The other part of it was that... it was 1984. Toy making has come a long way and in my mind I am still waiting for the perfect Haggar. I would love a fully articulated Haggar with a plastic robe and a removable Coba. Plastic clip-on pin optional. Plus, I know that the line was small in size, but I would love 6 inch awesome figures from Voltron. I'm not the only one, am I?
Mutilor and the Coffin of Doom 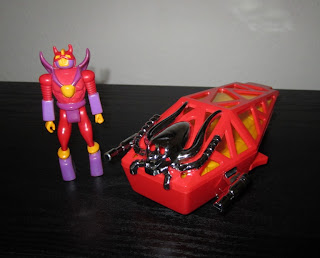 Mutilor was a robeast that came with the Coffin of Doom. For those who have forgotten, Haggar makes the robeasts that travel to Arus in flying coffins to go up against Voltron. Only in the 80's would it ever make sense for a cartoon and toy line to make collecting coffins super cool. 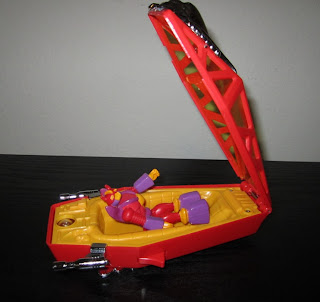 The Coffin of Doom flips open and there is a plush plastic liner inside for the robeast to travel comfortably. Mutilor is also your basic robeast with feet that remind of the armadillo shoes from the Alexander McQueen collection. Anyways the Coffin of Doom had a button that could make clicker sounds to simulate lasers being fired from the coffin. I also believe there was a light up feature, but since I just reunited with this coffin, I am not really sure. 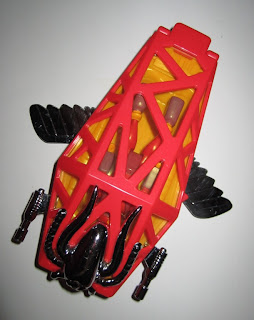 The Coffin of Doom also had wings that could fold out. Actually as far as toy coffins go, this is like the Mercedes of toy coffins. I really liked the Voltron toy line and though Mattel recently brought it back in 2012, there will be no more Voltron in 2013. So, I really hope someone can pick this property back up and release some more cool Voltron toys. The old line from Panosh Place was a lot of fun.
Also, getting the chance to reunite with this coffin has been fun. I recently found it in the attic and had actually forgotten having ever owned it. Haggar and Mutilor have been with me for awhile now. I am not sure how sad it is that I have collected that much stuff since I was young, and still forget some of the things I collected back then. But, it does make for some fun surprises!
Anyways, enjoy the photos and leave your comments on the old Voltron toys. Or even the new Voltron toys. And keep it here! I have a lot of fun stuff planned for October. Happy Toy Chest Tuesday everybody! Until next time!
Posted by Michael Lynn P. at 9:28 PM