While I finish the finishing touches on my trip to the Conference of Evil, why don't you click below for some exciting news in the world of toys! This is slightly spoiler heavy on upcoming releases for Masters of the Universe Classics and Jem and the Holograms, proceed with caution!


Just a little while ago I received a lovely email in my box... 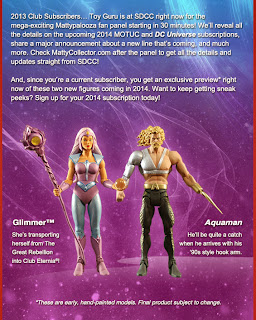 Glimmer is going to be released in 2014! Finally after all this time! She looks very good. I think the coloring is nice enough that it doesn't look too girly (for those scared to own girly things) but she still retains a look that is incredibly Glimmer. I like her accessories too. The orb in her hand looks like it is a part of her ability to control light. I'm guessing. It is about time we see her! Here's hoping we see some more members of the Great Rebellion at SDCC. The Aquaman isn't all that bad either.

Now for the next order of business. I don't know if these dolls are going to be shown at SDCC, but I received another email showing what is coming next for the Hasbro/Integrity Toys collaboration of Jem and the Holograms: The Stingers! 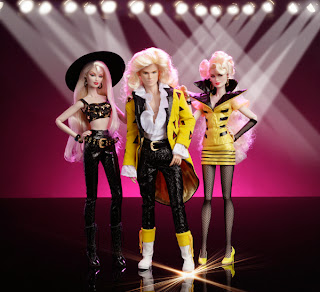 Towards the end of the Jem cartoon, a whole new band was introduced to mix things up with the Holograms and the Misfits. The Stingers were something else, and when Hasbro was unable to release these dolls originally, all fans could do was pine after what might have been. Now Jem fans are gonna be super thrilled with their release in September.
Rory "RIOT" Llewelyn 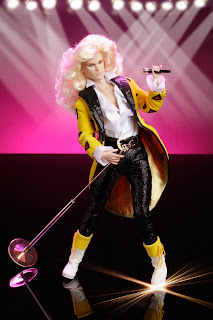 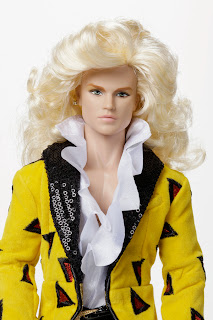 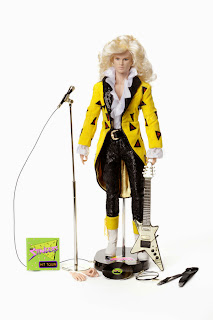 Riot was a seductive character that wanted nothing more than to essentially bed Jem. I mean I know that wasn't the exact plot line from the cartoon, but we can all read between the lines. Riot wanted Jem and not for wedded bliss. Just regular old one night stand bliss. Or maybe it would have lasted for a couple nights. Who knows. Jem never gave into him, thank goodness, but a lot of fans have certainly fallen under his sexy voice and his seductive music. Even Pizzazz had a thing for Riot, though he wasn't interested in her that much from what I recall. I would have liked to see them together though. Pizzazz and Riot would have gotten into some crazy mischief.
Ingrid "MINX" Kruger 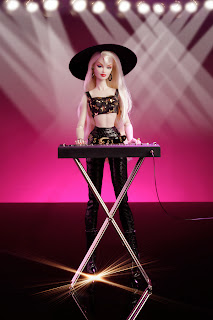 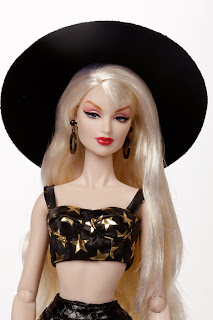 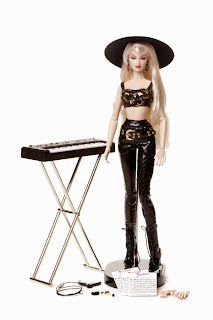 Minx is probably my favorite Stinger. I like her hat. I think a good hat can really make or break your day. I don't usually wear hats even though I am a Southern Belle, but it just gets too hot for hats. Minx was a mess from the cartoon because she wanted nothing more than to be with Rio. She really wanted to be with him, but she always came off a little too strong for him. Besides, he only had eyes for Jerrica. And Jem. Rio was always shutting Minx down though in interesting ways, which made this keyboardist to the Stingers very unhappy.
Phoebe "RAPTURE" Ashe 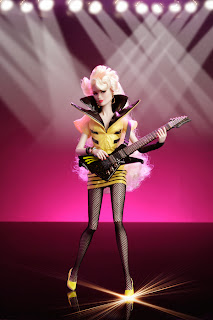 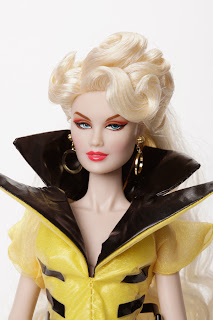 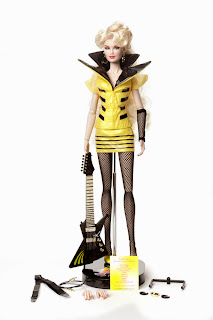 Rapture was a messy messy character from the cartoon. She was always scamming people and playing off this whole "I'm mystic" sort of vibe. There was a really funny episode where she basically angered a mob of people and the Stingers found themselves running away trying to escape. I really like her outfit with this new doll though. She just looks very cool. Integrity Toys really captured the wild and interesting looks of the Stingers. They look otherworldly. 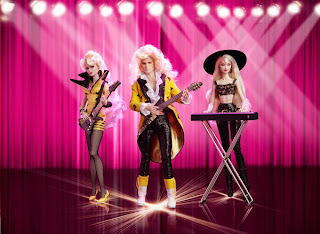 I know that the Stingers are a long fan demanded set of dolls for Jem fans, and I am really happy for fans to now have the chance to pick them up. For me, Pizzazz was the ultimate Jem release from this line, so I am in no hurry (yet) to place pre-orders on them, however I am sure they will be going fast. Remember, these Jem dolls can only be purchased from registered Integrity Toy dealers, a list of which can be found right here.
So that is about it for Bits and Pieces! All kinds of exciting things seem to be getting revealed this week. It is one of the best weeks of the year. Now don't go far. I will be bringing you coverage of the 2013 Conference of Evil!