The week has been a bit slow for me, but how about a nice little entry into the Dorkette Book Club for added weekend fun?


So I know it has been a hot second since I have posted anything, but the week has been a mess. Not only did I mess my ankle up, but I then proceeded to also mess my knee up with a doggy gate. I wish I could say that it was all due to me fighting off the forces of evil, but no... Walking in the dark haphazardly is just never a good idea...

But do you know what is a good idea? Quite a few things. First off, Target is beginning to have a lovely Summer Clearance on the toy aisles. I love it when the toy aisle goes on clearance at Target. Deals get to happen left and right.

Also, thanks to fellow reader Nick, I learned what the mystery toy was from this week's Toy Chest Tuesday! The toy was from the line called Snailiens. A total mess in the best way. I also googled Snailiens and came across this rather interesting and cool blog called Bogleech. Click on for more information on Snailiens and also other fun information. This was a line that my brother was interested in and I clearly had no clue about it, but now I am glad I know the identity to this mystery toy. Be sure to also check out Nick's blog- Moose Comics. He writes and illustrates his own comics and they are really funny.

Of course nothing was better than a super hero story involving your own choices for the character's fate! Back in the day, Archway Publishing wanted to compete with CYOA, so they had a series of books called Which Way Books and one series involved the Super Powers heroes. I never really collected these books, but I did have the second one that was about Supergirl! 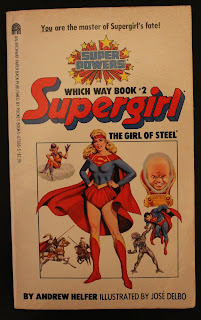 So here's the scoop on me and Supergirl. There was a brief moment as a kid where I really liked Supergirl. She seemed more relatable to me than say Wonder Woman. I was obviously a huge WW fan, but Supergirl was a younger character and her whole look seemed very accessible. As a kid I never really thought about dressing up as Wonder Woman because on some level I felt like her costume was for grown folk. But Supergirl, well I felt like I could pull that whole look off easy breezy. (Beautiful dorky girl!) Plus I really loved the ill fated Supergirl movie. So this book was a very exciting read for me. 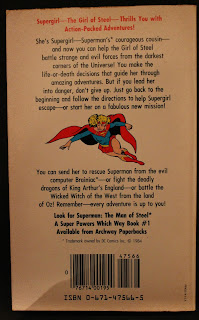 The plot points of this book sound like a far out acid trip starring Supergirl, which sort of works since there have been some strange story lines with Supergirl. The exciting thing is that the story provides so many different potential outcomes that the reader can have Supergirl fighting dragons or dealing with stuff from the Wizard of Oz! It is a really nice story that not only provides adventure and excitement, but it also reminds the reader that reading is fun and important.
If you are able to come across these Which Way Books, you should pick them up. They may not have been as enticing as the Choose Your Own Adventure books, but Which Way Books had their own important charm. Not to sound like a dorkette or anything, but books are really something special and I hope that kids growing up these days are able to appreciate an actual real book and not something that appears on a screen. Not that there is anything wrong with Nooks or Tablets or whatever (hey, I know my ramblings are on a screen) but there must be something said for an actual paperback.
Anyways, I am done rambling for one day. I have so many things I want to type about, but I have just been lazy with it all! It's the heat I tell you, the heat! Summer is trying to knock me out, or bust up my legs at the very least. The month of July is going to be something special though. I may not be writing up any She-Ra fan fiction right now, but there is plenty of good stuff coming up that will be sure to get you either laughing or something.
Oh! And speaking of fan fiction, my friend Paladin over at Nerd Society is starting up a nice fan fiction on one of his favorite anime/mangas entitled K-ON! Check it out here. It is a really good start to his story and from what he has told me, the story will be a really good one!
Posted by Michael Lynn P. at 12:30 AM