Toy Chest Tuesday is here, barking up another dorky tree! Click below to read more.


This past summer I did a Toy Chest Tuesday on Pound Puppies, and I wanted to do a quick add on. I recently came across a really special item for my collection, my favorite Pound Puppy character in miniature form! 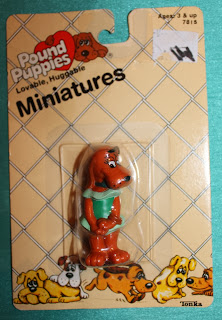 Nose Marie was my favorite Pound Puppy character from the 1986 cartoon. I loved her dress and the coloring used for her animated version as well as the toy version. She is a bloodhound/boxer and I have been searching high and low for this miniature. Collecting this version of Pound Puppy toys is rather interesting. There are moments where eBay will have some things and other times the whole landscape will be barren. 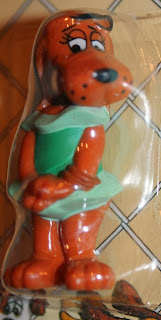 Isn't this just the cutest miniature? I am so happy to have this. The closest thing I had to toys like this were a set of Pound Puppy birthday candles. Yes, I totally played with wax candles for toys as a kid. My parents were always so concerned about me and how I'd turn out in life. I remember my mom telling me, "These are candles. You can't play with them because they can light up with fire." It's not like I was going to play with matches or a lighter. And I clearly wasn't Drew Barrymore so there was no reason to think that things would just spontaneously burst in flames.

I was actually one of those strange kids that was always concerned about doing the right thing. I remember being scared of one toy because there were flames on it and I was like, "I can't play with fire!" But I totally played with wax candles. Oh goodness. On a side note, those poor candles melted down. My brother and I found them on our last Attic Outing, and it was so sad. There was nothing left but Pound Puppy candle parts melted into one dried wax mass. So sad. 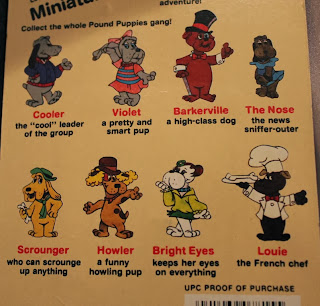 Here is the back of the card, which should look familiar to those who read the original Toy Chest Tuesday Pound Puppy feature. I loved this cartoon so much. I just love the idea of cute things like this. Barkerville is a high-class dog. That's comic gold!

Anyways, I wanted to share this little mini Toy Chest Tuesday with you all. Hope all is well, and stick around! I've got a Bodacious Baddie coming up that will reinvigorate the villain in girl toy lines.