There's a lot to talk about regarding the toy/collector world, so I thought it'd be best to roll out a new Bits and Pieces! Click below to get the fun started!


I know it has been a few days since my last post, but with all the excitement of Halloween and everything, I was a busy bee last week and needed just the slightest bit of a break. As much as I love writing, it does take some work to get things done. I was just exhausted from writing. Not to mention all the running around finding folks to buy perfume while also color matching foundation on people's faces. I must say, nothing makes you feel more like an artist than applying the right shade of foundation to a stranger's face. It's scary at first, but after awhile it gets easier. Anyways, let's get on with the topics!

The Cool and the Collected

I am very thrilled for fellow collector Brian Adams from Cool and Collected. I have posted a few times about his Kickstarter project that he has been trying to get started about a magazine called: Cool and Collected. From the looks of it, this is going to be a phenomenal magazine. It is going to be a hard copy periodical that features all the wonderful things that we have missed in our collectible magazines. Well, so here's the deal. He had a goal of $6,000 and he has made the goal! (And then some.) I am very happy for him. This is going to be a big deal. I had made some flyers and even asked my local comic store to help pledge the Kickstarter project, so I hope that they were able to. (The people who pledge are kept in confidence, so I have no clue what is what.)

Like I've said though, this is a big deal. We all should want to see this succeed for many reasons. First of all, I miss ToyFare magazine every day. It was always one of my favorite magazines and to be able to have someone putting something together again for us to have in our hands, it is just exciting! The other thing that is truly wonderful about this magazine is the talent involved. Brian is pretty talented on his own, but he is working with some amazing people. I don't know what everyone's work is going to look like, but Erik the Illustrator has already posted a sneak peak at an image he has created for an editorial article in the magazine. Check it out and if that doesn't whet your appetite, be sure to check the Cool and Collected Magazine Kickstarter page. There is still some time left to fund this project. The goal has been met, but any extra bit can certainly help. I am so excited to have this magazine in hand, I can't even begin to tell you all. Long live print!

My Heart is a Flutter

Apparently I missed a lot in terms of He-Man and She-Ra news! This past weekend Comikaze went down with all kinds of stuff going on in the world of comics, collectibles, and other fun geeky stuff. Well some of the things that happened involved Mattel showing off some more releases for the 2014 Masters of the Universe Classics subscription! Here are some pictures, courtesy of Mattycollector. 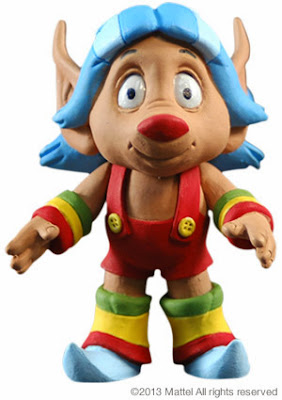 Loo-Kee was a hidden staple at this past Summer's San Diego Comic Con, and he made his appearance yet again at Comikaze. I really hope this means that we will be seeing him again. He also appeared with this guy below: 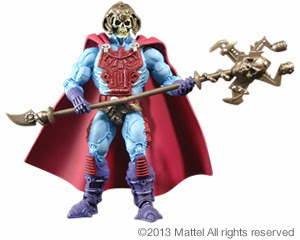 Things continued to get even more awesome with the image of New Adventures Skeletor! The NA He-Man was released this past Summer and fans will now get the chance to own the NA Skeletor counterpart. I have to say, this Skeletor looks pretty menacing. I know that Skeletor looked a bit silly from the old NA He-Man cartoon, but wow, the Four Horsemen really gave this Skelly a terrifying look. I think he's a keeper. 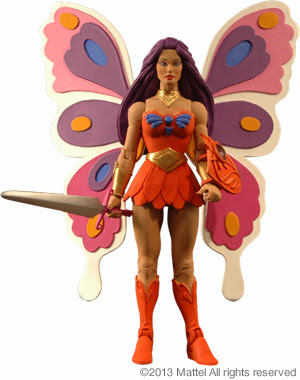 Up next is the one to keep your eye on. Flutterina!!! A few weeks ago there was a teaser image of a mysterious sword with a pink handle shown from Power Con. Everyone immediately suspected that the sword would belong to Angella or a pink Teela. Well this sword belongs to Flutterina and she looks amazing! When I saw that she was the 2014 August figure my heart skipped a beat. I flipped out beyond belief. I was not expecting Flutterina to be released in 2014 at all! In some ways I wasn't even sure we would ever see her anyway. She's a bad ass warrior woman with brightly colored butterfly wings. It's not like most people are clamoring for a figure like this. But I sure am! She looks stunning. Her face sculpt is the best yet and that hair looks fly. The wings are completely toy accurate and I just see myself purchasing a few of these for custom projects too. I also plan on getting one for my brother.

My brother was born at the end of the 80's so he missed out on the original run of He-Man and She-Ra. He loved my He-Man and She-Ra toys though, and Flutterina was his favorite. So upon seeing this new Flutterina he was like, "I totally want one!" Now here's the thing about my brother, he does not own toys. He actually likes to joke about all the collectible stuff in my Archival Room, but he does enjoy it and finds it very fun that I have held on to so much. So yeah, he is totally getting a Flutterina too! I am just so excited for her.

Other News You Can Use

Halloween is over and toy Miss M lost her dog at the hands of the vile Velvet Sky and Janine may or may not have died at the end of the Halloween special, but there are some important things coming up that I want to share with you all. First of all let's get to the scoop on toy Miss M and Velvet Sky. These next couple months are going to be amazing. If you have been following this zany story about the toy Miss M interviewing toys while also being stalked by Velvet Sky, then you know something big is going to happen. I have been plotting this story for months upon months and I am so looking forward to getting to it!

Also I am going to be involved in a very fun project in the new year. I can't get into all the details but I will be working with friend to the Diary, Paladin. He writes for NERDSociety and has actually been posting a rather lovely fanfic every Thursday based off of K-ON! (a Japanese manga.) Since I am not well versed in the world of manga I have certainly learned about a world of characters that is just very interesting. For those interested, here is a link to the latest chapter. Anyways so this project that we are working on is going to involve characters of our own creations! I know I am asked every now and again if I have ever written stories with characters of my own creation, and I am glad to say that I will be! The set up is going to be really fun, but I will explain more as we get closer to the new year.

There is also one other thing I want to share. Aside from all my shenanigans here and the articles I post for NERDSociety, I am also going to be doing some writing for Retro-Daze! I have been dreaming up some things to write and I hope that I am able to write some fun items for you all to enjoy. I really like Retro-Daze, there are all kinds of fun things that go on there. (They recently had a Halloween event that I sadly was unable to participate in, but it looked to be everything.) I just wanted to share these things with you all because sometimes I am asked what I am up to in terms of writing. It isn't always about the faces I am helping to put on or the fragrances I am trying to sell on people. Though I must say, the Michael Kors scent Sexy Amber is beyond sexy. I love the scent and highly recommend it to anyone looking for something to wear in the Fall and Winter months. Oh goodness, where am I?

That is about it for all the new Bits and Pieces! Lots of great things coming up and I can't wait for it all! Take care everyone! May your collections just soar! (If you couldn't tell, I'm really thrilled for Flutterina.)