I Am Elemental: Courage Review!

We don't need another hero, because we have Courage. Click the link for my look at the brand new figure from the I Am Elemental toy line!

I've written about I Am Elemental numerous times. It is one of my favorite toy lines that makes up a great line of female action figures with an empowering message for girls, boys, and adult collectors alike. Everything about this toy line is pure perfection. Julie Kerwin and the IAE Team started out with a Kickstarter campaign that raised an impressive amount to make their toy line dream come true for all of us. Being a supporter of this line from the beginning, I have managed to collect many of the figures. In fact one of the figures (Enthusiasm) plays a big part in my toy soap opera story as I have made her toy Miss M's super crime fighting alter ego. (Fun right?)

The first wave of figures made up seven elements of courage. The figures were in a 3.75 inch scale and while I was beyond thrilled to own them, one of the things I had high hopes for was an IAE figure in a six inch scale. Most of you know I am a fan of figures in that scale. In all reality I'm a fan of any figure. I'll be that 90 year old woman in the nursing home with her toy collection. It will be epic.

I am getting off track like I so often do. Julie and the IAE team answered the dreams of myself and other fans with the newly just released I Am Elemental figure Courage! She is a 6.5 inch figure with some awesome items and details. Oh, and let us not forget that she has over 30 points of articulation! Now let's check the toy out! 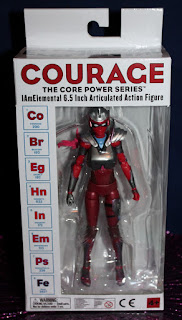 The packaging for Courage is simple yet packs a lot of great details. I enjoy the periodic table of elemental themes for the first wave of figures on the right. The effect is a nice way of playing with the title of the line while also explaining the purpose of Courage. She is the core power of the other seven figures. There's a nice synergy with this line. The window on the box also opens up and really shows off the figure. On a quick side note, the image at the beginning of this post is from the top of the box featuring that delicious I Am Elemental logo.

The front window spills over to the side where even more details of Courage can be seen. The armor on this figure is unbelievably sleek and fresh. There is so much to love about this figure!

Courage's sword and shield are displayed perfectly on the other side of the box. This is such a nice use of space for the toy packaging. Being able to get an up close view of the accessories is divine. 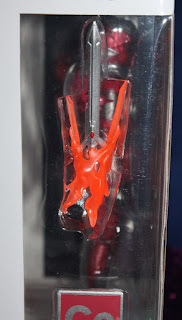 The sword has a nice flame effect on it. In the last number of years certain action figures have used similar effects and I think it is a toy trend that needs to last for a very very long time. 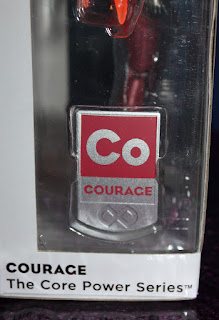 Courage also comes with an elemental shield like the other figures released in the first wave. It's an interesting design for a shield as it serves as a nameplate for the figure and can be worn as a charm for a bracelet like the other shields. 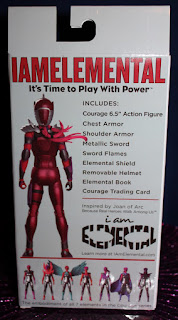 More great use can be seen for this toy on the back of the box. The name of the line is proudly displayed at the top followed by the fun tag line below. A nice list of what is included with this purchase is really nice. Often times toy lines neglect this detail and it is nice to have that quick reminder of everything inside. I also appreciate an image of the figure from the back. It's a nice touch to share how the figure is crafted, especially in terms of keeping this figure mint on display. Some collectors never remove a figure from the box so it is nice that a collector in that situation would have the option to view a rough idea at how the figure looks from front to back. 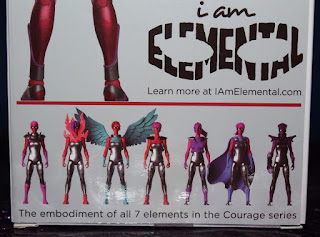 One of my favorite aspects of any toy packaging are the images of other items for sale. I can't stress enough at how fantastic the entire line looks. Just a solid line up of female action figures. There is a uniformity to the line that some really enjoy and others find bland, however I think there is enough variation with the use of color and armor/costume pieces that really give everything a sleek and fun look. 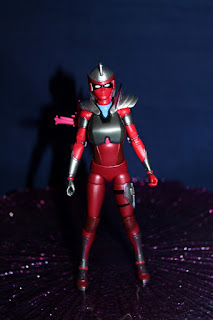 Out of package Courage is great. (You all had to know I was going to open this toy!) There are some loose joints at the knees and hips, though these are minor concerns because the figure can stand on her own very well. I really enjoy the use of color and armor on this figure. She looks like a warrior woman, so the IAE team really delivered a strong powerful looking figure. 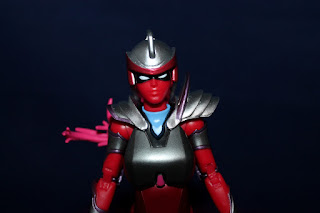 All paint and sculpting is great. There are no smudges or marks on the figure I purchased. One of the things I really enjoy about this toy line is that the figures do not have skin tones that are "natural." I really dig that the figures are red, orange, pink, and purple. It's a nice touch. 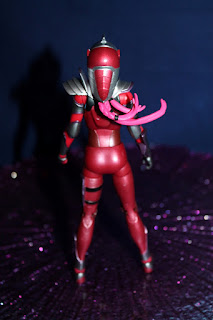 There are plenty of details for the figure all around. I am constantly impressed with the sculpt of these figures. Sometimes figures will have have a great amount of detail placed with the front sculpt of a figure while the back sculpt will be left lacking. This is not the case with Courage. Check out the details on her helmet and the hair. Again, everything seems simple in design but when it is all put together there is a great quality to the overall aesthetic. 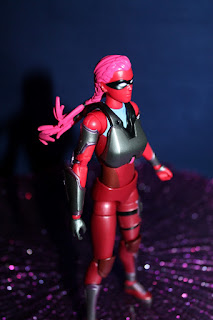 The helmet and shoulder pieces can be removed. I am so excited for this! Without the helmet Courage has a great sculpt. The color and shape of the hair has such vibrancy and movement. Perfect! The chest plate can also be removed though I was a tad nervous to do that. I wasn't entirely sure how to remove it. The chest plate is made of a softer plastic which more than likely can slide over the head. Anyone else have tips on this piece? 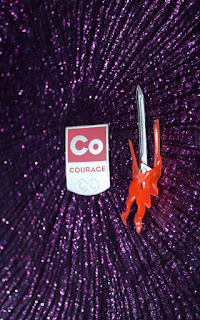 More images of the accessories! The brushed metallic paint on the shield is nice. The flaming Energy Sword is connected to the flame effect. The plastic is soft with a unique shape for the actual sword. Both items are enjoyable and make sense for the figure. I am not sure what else I would have liked included with the figure. Possibly a stand? However that is not a deal breaker for this item. 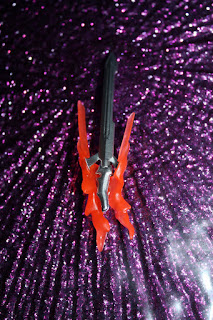 Here is a quick image of the other side of the sword. The ragged handle helps with a nice grip for Courage. I also have to say that even though this is a toy line aimed for girls and boys, I just burst with pride when I think of girls playing with this figure. Most toy lines aimed at girls do not feature the word 'action' in them let alone a sword being included with the item! I wasn't a violent or aggressive child, but I loved characters like She-Ra with the idea that I could wield a sword too, it was empowering. Don't get me wrong, I love fashion and some of the stereotypical things that girls are expected to like. However I always enjoyed kicking butt and being my own hero. That is the importance of this line, for girls and boys. There's a lot we could all learn from playing with power. 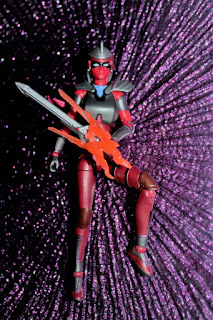 Here's a fun Courage pose! I'm not a fancy toy photographer. I use the same glittery cake plate behind Courage for a lot of figures because I like sparkly things. I do love toys though and this is my own way of showing off just how much fun this figure is. The sword fits easily into her hand. The joints and articulation are great barring some looseness with her legs. She fits in nicely with other toy lines. (As faithful readers of this blog will eventually see in the future.) 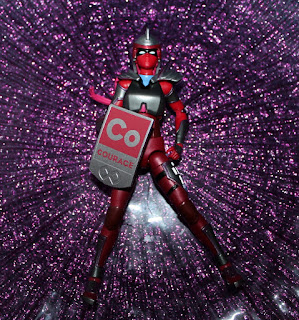 Like the flamed sword, the elemental shield also snaps easily into Courage's hand. Now she is ready to be a hero for us all. There are a lot of nice aspects to this figure and it comes in at $24.99. Some might scoff at the price but I think it is worth it. I'm a huge fan and will continue to support I Am Elemental. Julie and the IAE team are really great. They listen to their customers. What is not to love about this line? I have even heard that a new figure will hopefully be unveiled in February. For more information on I Am Elemental please go to the IAmElemental website. These folks put their heart and soul into this line. It is still a start up toy line and needs continued support to thrive and be bigger and better. Now go and check them out! I hope you are all well. I've got some fun things coming up on Diary of a Dorkette, so come on back after you do some I Am Elemental toy shopping. Now let's go play with some power!