Now that we are approaching the peak of holiday shopping season, I can't help but think about the items that will be highly sought after in the toy aisle. This year is like many others. In fact in some cases it feels like we have stepped back in time. (Teenage Mutant Ninja Turtles are flying off shelves!) Anyways, I thought this week's Toy Chest Tuesday would be befitting of one popular toy from a much simpler time. (Was there ever such a thing?)

Once upon a time Cabbage Patch Kids were a tremendously big deal. This is not exactly news for some of us, but it is hard to forget the cultural impact that those old baby dolls from the patch had on countless kids. My parents tried to find one during the height of their popularity for Christmas, but couldn't. I think they got dragged into the hype. After all I was never that interested personally.

I thought CPK was cute, and I loved what the line was all about. However I never cared for playing with baby dolls. As a child I just thought it was strange that I would want to pretend to have a baby. I was like, "I'm way too young to pretend that I'm in charge of another life." So baby dolls were never really on my radar. Fashion dolls were another story. I loved Barbie and the overly melodramatic dinner parties I'd throw in my makeshift Dream House. (It was made from a shoebox.) I was playing Real Housewives of Beverly Hills before that was even an actual show. God help us all.

So I just completely missed the Cabbage Patch fever that my cousins and friends had gotten caught up in. But, I'm never one to fully miss a party. CPK must have realized that there was neurotic dorky children like me, so they created a line of small poseable CPK figures. Now that was something I could get on board with! I had the cute deluxe sets along with the fun stampers. The CPK phenomenon ended up biting me after all.

Sadly I've lost most of that stuff, but luckily the secondary market does not really care much for the little poseable CPK toys. They can be found really cheap in mint condition. So let's get this Toy Chest Tuesday started! 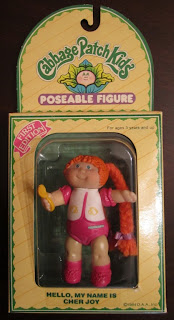 Released by Panosh Place around 1984, the figures were very simple. Every figure had a name. This one was named Cher Joy. (Best name for a CPK ever.) Some of the figures, like Cher, had articulation around the arms, legs, and neck. Others were just solid pvc. They also ranged in ages too, so there would be older Patch Kids and little baby Patch Kids. They were basically like the larger dolls, just in smaller form. 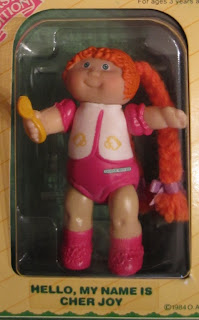 Seriously, how cute were Cabbage Patch Kids? They were decked out in colorful clothes and had hair made of sting/yarn. At about the same height as the vintage poseable Care Bear figures, there was a lot of cute for sale in the 80's. 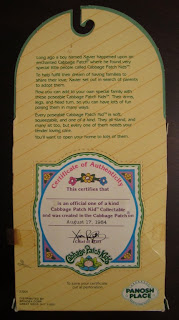 Since there were so many CPK items to collect, the back of the box did not feature much in the way of other releases. Just a simple bio and adoption certificate adorned the back. I believe I learned an awareness about adoption from CPK. I remember having conversations about what that all meant from my mom. However I will say, my mom wasn't like, "Yes. Adoption involves picking children out of cabbage." But this toy line was really nice in that it created a space for conversing about other experiences in life that I didn't know about. 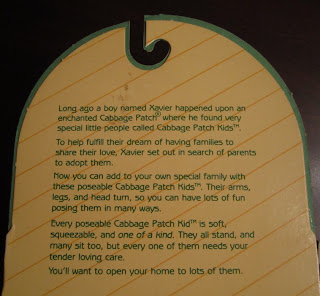 So the bio is very interesting. If you read that first paragraph it totally sounds like a children's version of the X-Men. I totally like the concept of adoption being part of a toy story, but at the same time it is bios like this that create big time problems for a dorkette like me. This idea of getting as many as you can and loving them like they were your own... I mean that isn't the best marketing plan for a collector hoarder like me, ok? If toys and figures can be adopted as if they were children, well move over Angelina because I have adopted an entire population of action figures, dolls, and stuffed animals that I treat as if they were my children. (You all know how I reacted when I reunited with my long lost Glimmer.) I realize that this makes me seem crazy, but what are ya gonna do? 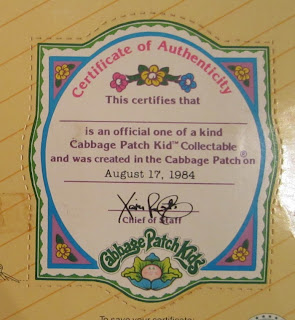 The certificate of authenticity doubled as your figure's adoption papers. This was actually really fun, because even though the toy already had a name, you could make up your own name and write it on the certificate. It was cute. I remember marking down the birthday of one of the poseable CPK figures I had, and I was like, "I'm going to celebrate your birthday every year!" I didn't. I do have a maternal instinct, I really do, but who was I kidding? I had these crazy illusions that I'd have a birthday party for my figures. Lord knows what I was going to give them as gifts, but the whole thing just got convoluted. This is what happens when you grow up and don't get outside much.
Anyways, Cabbage Patch Kids had their moment and though they have stuck around on toy shelves, their popularity would never be quite as out of control as it was in the early 80's. With that said, I am really glad they came out with these little poseable figures. They were really cute. Did anyone else have a Cabbage Patch Kid? If so, did you make up a name? Did anyone else try to have birthday parties for their dolls and toys? (I really hope I'm not the only one.)
So enjoy this Toy Chest Tuesday! I wish good luck to everyone who is searching for any of the hot ticket toys this year! And since we are winding down to the end of the year, there will only be a few more Toy Chest Tuesdays left! Like last year, I will take a brief break from Toy Chesting on a Tuesday and resume in the new year. I have some fun things to come, and I am planning on the last Toy Chest Tuesday of 2012 to really end the year with a bang! I hope you are all doing well. Thanks for stopping by!
Posted by Michael Lynn P. at 4:57 PM