So if you have followed this blog long enough, you might know that I am obsessed with Lego Minifigures and pretty much anything in a blind bag. Last year Playmobil amped up the competition with their own blind bag figures to rival Lego and just about every other toy company. The interesting thing about Playmobil is that they have two different sets per series that are broken down by male and female figures. Well for what seems like an eternity, the first series has been sitting at my local Toysrus collecting dust. (I had already felt my through the blind bags I wanted.) Of course I had heard rumors of newer series, but there wasn't much to go off of.

Until the other day, when I was reading over this great toy blog called Toyriffic. And is this site ever toyriffic. The blogger's name is Eric Stettmeier and he had some images of the second and third series of Playmobil blind bag figures. I was super excited to finally see some nice images of what to possibly one day expect.

Well, that day ended up arriving sooner than I thought, because I actually saw the female series 2 blind bag figures today! So let's check out some pictures, and then we'll talk. 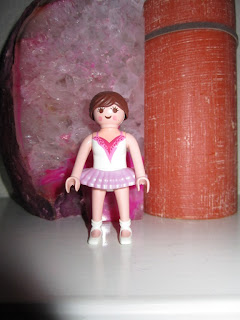 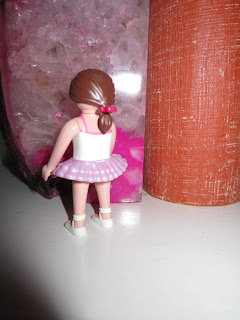 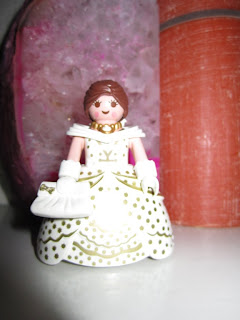 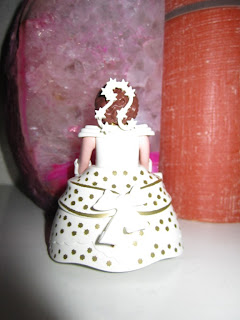 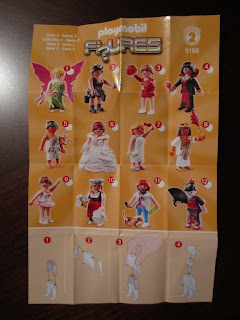 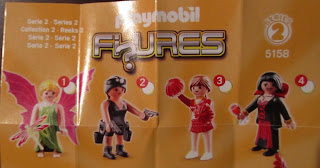 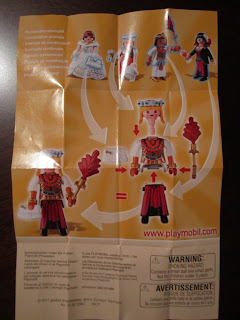 So there are some really fun figures for this second series. I am really hoping to find the vampire lady, because I think everyone should have a vampire lady in their collection. (She'd make a great Vampra Playmobil figure, no?) Anyways, I have included all these pictures to help you study. It is a challenge looking over these darn blind bag figures.

Unlike, say, the Lego mini figures with their obvious pieces to feel for, the Playmobil figures are a struggle to determine. First of all the bags are puffy with air, making it really difficult to grope. Secondly, each figure needs to be put together from scratch. So there are just a ton of similar pieces to sift through without opening the bag.

If any of you find these in stores, study these detailed pictures with all that you have. There are some tall tale signs. First off, the ballerina and cheerleader have a newer leg system that is connected to the bare bones chest piece. Pom Poms are also another obvious sign for the cheerleader, but could be confused for wigs. The ball gown gal is also easy to search for because she is the only one with two big skirt pieces (just don't get the gown confused with the rolled up towel for the bathroom girl.)

My problem was that the cover on the bag does not show all the details of these figures. And I always feel really weird groping these bags in a store. I mean people always look at me like I'm some crazy lady, and don't think I don't hear the mumbles from those folks either. Sometimes I wonder if I am losing it. Like maybe people aren't saying things or looking at me strange. It might just be my own guilt at geeking out over Playmobil. But what if it isn't? What if there are people out there that despise dorky folks with a passion and just get sick with the thought of seeing people blindly searching for random vampire ladies and Cleopatra wannabes? I think too much on this crap.

Anyways, I am really happy to see these showing up in stores. They are fun and Playmobil always has interesting ideas for their figures. Before the blind bag mania, Playmobil would just release a set of mini figures regularly and one year they had a nun. So yes, I am a proud owner of a Playmobil nun figure. It just seems like an unexpected figure to own. But, I am thinking she'd make for a fun Dorky Snaps edition with an American Horror Story Asylum twist.

So I am off to work on the next chapter of Adora's Search for Honor. I am not sure when it will be done this weekend, because tomorrow I am helping my mom with this really big cooking contest for the best chocolate dessert at some dessert fest thing. I can't cook to save my life, but I am good at passing food out, looking pretty, and trying to get people to vote for her dessert. This should all be highly interesting. So until next time, take care everyone.
Posted by Michael Lynn P. at 5:09 PM