...sort of. Let me be clear, many dreams go up in flames and smell worse than Stinkor. But every now and then a dream can come true that is just exciting because it brings with it a feeling of something different.

So as many of you know there has been a limited series Masters of the Universe comic put out by DC comics. It has been decent for the most part. I have enjoyed it, but I wouldn't say it was the best story ever told.

Anyways, the MOTU comic is coming back as an ongoing series in April and thanks to a special leak by MTV Geek, there is an all new variant cover for the first issue. Click here for the full scoop, but also feast your eyes on the variant cover: 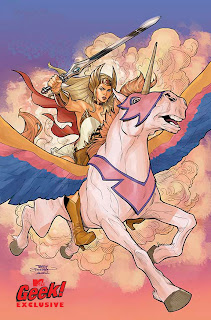 Can I just say, I have long waited and hoped for She-Ra to appear on the cover of a comic for a very long time. I never thought I'd see the day. Granted this is a variant comic and not the regular cover, but it gives me hope that I will get to see more She-Ra and other POP related comic covers in the future. The artwork looks great and it leaves me craving some images of Catra and other fabled POP characters.
I know that there are some really talented artists in this world that have created some stunning She-Ra images, but it is just nice to see an official release of something. I feel like this could be something really great for She-Ra and all her fans! (And maybe even new ones?)

Anyways, I just wanted to share this, because I am quite excited about it. So I am done. I have to get back to my special interview with this month's Heroic Hottie! Take care everyone.
Posted by Michael Lynn P. at 9:56 PM