Halloween is for Girls!

Well, not really. The most exciting holiday of the year is actually for everyone, but this year there have been some pretty cool girl toys to get me ready to celebrate the spookiest night of the year! Click the link below to find out what this lil dorkette has been up to for Halloween 2014!

The truth is, I have not been up to much. Last year was a really great year for Halloween. I had joined the Countdown to Halloween blogging experience which turned out to be so much fun. I didn't join this year because I do not have the time, but do check it out. There is a list of participating blogs on that site that are all going to be celebrating some amazing Halloween goodness. They also have cool Halloween sticker packs for sale designed by the super talented Shawn Robare, so please go and check out the awesomeness right here. Candy corn not included.

Also, Retro-Daze.org is getting in on the Halloween fun too with various articles being written about the greatest holiday ever! I do not write on that site like I used to, but it is a lovely place to enjoy some retro related articles.

There is also some really fun stuff happening over at the Sexy Armpit. Jay is putting together a nice Halloween Special on his blog, and he asked me to do some voice over stuff for a brief role in the special! I am beyond thrilled to have been a part of it, and I look forward to checking his special out. I play an intrepid radio newscaster with sass named Kim! (At least, this was my development of the character. It's only a few lines.) It debuts this coming Friday (Oct. 8th I believe.)

Anyways, so last year Halloween was pretty darn epic. The Monster cereals brought back Frute Brute and Yummy Mummy. April O'Neil and Casey Jones married each other a second time while Frankenberry found new love with Strawberry Shortcake during a spooky kinda Halloween Party. I was also able to really catch up on some scary movies. Of course, my marriage quickly crashed and burned shortly after the holiday, but all in all, 2013 was a great Halloween season.

This year has been a bit different though. I feel the spirit of the season, but Halloween 2014 is not as exciting as past Halloweens. At least as of yet. I don't know if it is due to my being incredibly busy with multiple jobs or if it is due to the upcoming year mark that things ended with my ex husband. I just do not feel the fevered Halloween excitement like I normally do. I don't want to sound like a broken record. Relationships end, marriages end, we all have to move on. However I would be silly not to reflect on the fact that the life I thought I was going to live for decades to come changed in a huge way last year. I do feel that I want this to be a truly amazing holiday season though. I love the holidays and I want 2014 to be the holiday season that I get my groove back!

So on to some fun and dorky stuff. While Frute Brute and Yummy Mummy are resting in their tombs or wherever Monster cereal mascots go, I have managed to collect some scary treats for this year's Halloween season. Behold, the cutest ghouls ever! 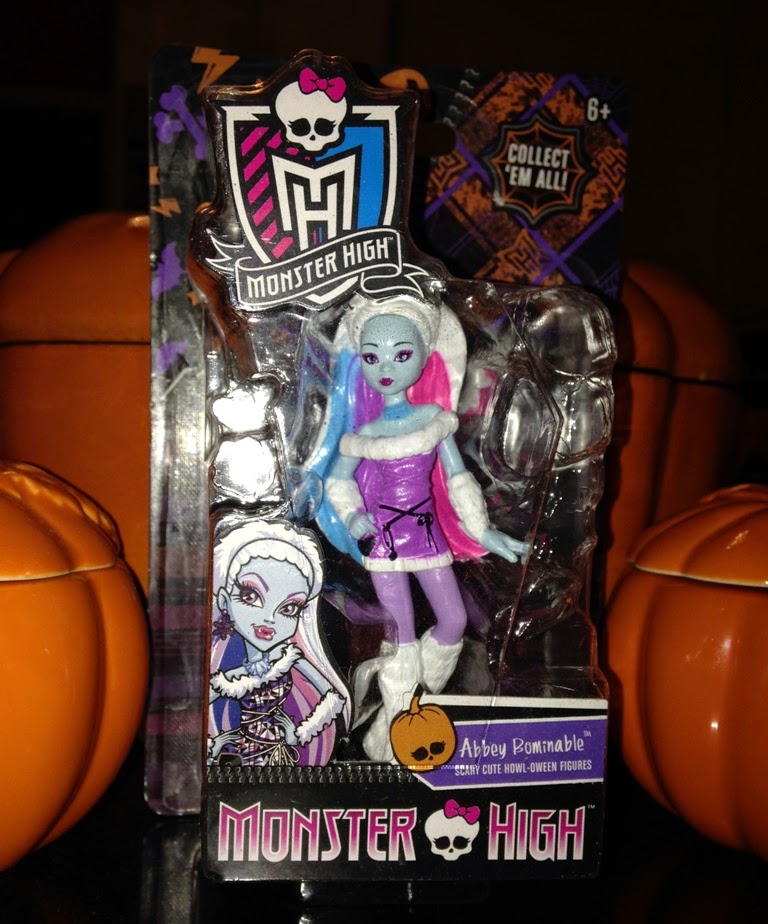 Monster High shows no sign of slowing down. With a new collection out called Freaky Fusion and a slew of special sets in stores, Monster High continues to prove to be one of the most fun doll lines to collect. It was only a matter of time before Monster High and Halloween crossed paths. While not in a costume, this Monster High mini figure comes in Halloween themed packaging and was purchased at Target. (I simply adore the Holiday themed aisles at Target) There was not a large assortment of characters to choose from. The sculpts of the other figures were based from a video game line of smart tablet figures a few years ago, however this Abbey Bominable figure is totally brand new. I've never seen this sculpt used before and I completely flipped out. Just a really nice way to collect a property in a different size, which always works for me. 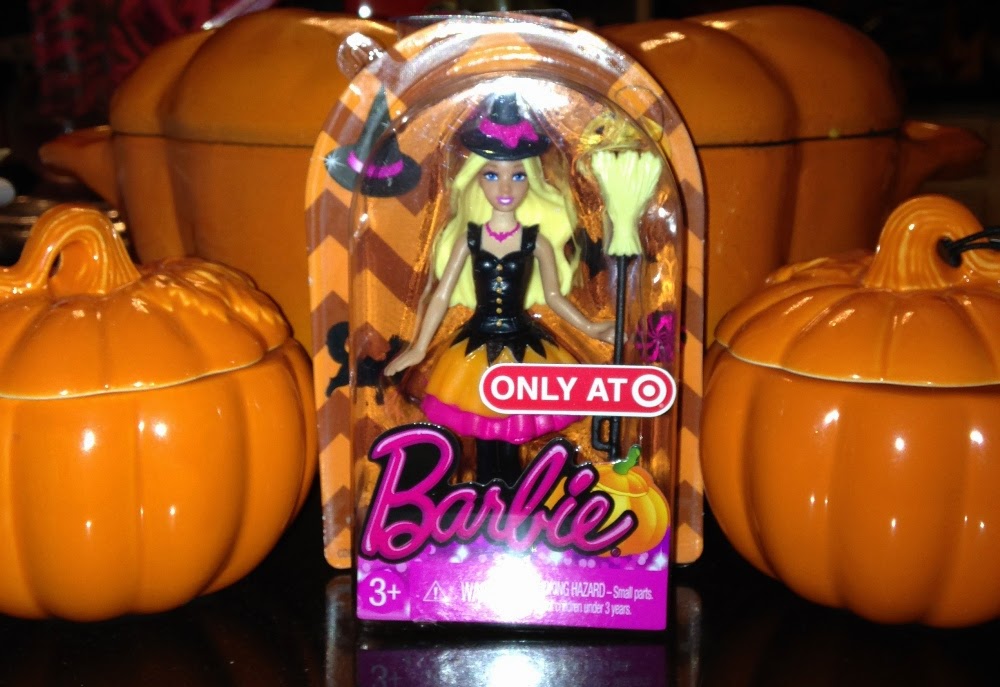 Another recent find at the Halloween aisle in Target: a Barbie witch figure. This is so cute. I do not recall Target having something like this last Halloween, but I am glad they have done it this year. I am a total sucker for things like this. It's just too cute! Look, I may like the super hero fare and all the warrior women I can handle, but I also fall for the cute stuff too.

In fact, have any of you guys and gals been collecting the toy line Shopkins? This is a total side note, but I am obsessed with Shopkins. They are like the girl version of the Trash Pack Trashies toy line. I am in love. Shopkins are like tiny figures that are items you'd find in a grocery store, but everything has a face on it! It's just the cutest thing ever and the line reminds me of something I would have found in stores when I was a kid. So yeah, totally obsessed.

Anyways, that's about it for now. I am sure I will be posting a few more Halloween related topics soon. Also, since I have been asked this by a few people, All My Toys will be finally reaching the point we have all been waiting for. Toy Miss M will be looking a little different very soon! Hope you are all doing well, and I'll be back when the moon is full and all the boys and ghouls are ready to attend the monster mash! It's a graveyard smash!