As a toy collector, it would seem that I would only collect the things that I really like. Right? Makes sense. For example I love She-Ra, so I want to own everything with her mug on it. Her friend's mugs too. However, I also like collecting odd and off the wall things. Items that I don't know much about, but for some reason they seem compelling to own. I like to think of them as conversation pieces, like really expensive works of art. Except they are cheap. And some would argue aren't art at all. Whatever.

Female wrestling figures fall into that category for me. I do not currently watch wrestling. I couldn't even tell you who is "good" or "bad" or what any of the rope opera stories are right now. I used to watch in the 80's with my dad. I loved Miss Elizabeth. She was always so pretty and wore the best clothes. Every now and then there were also two men that would fight over her, and I'll be honest, that always seemed like a lot of fun. Anyways my dad was never the type of dad that did the whole tea party thing with me, so watching wrestling with him was a way for us to bond.

That is sort of when I started collecting female wrestlers. My dad surprised me one day with an LJN Miss Elizabeth and for awhile she was the coolest toy I owned. I eventually got older and lost interest in wrestling. It just didn't appeal to me. Until the end of the 90's when I got sucked into the yummy Hardy Boyz, Edge, and the Rock. Before I knew it I was dreaming of dating a Hardy Boy and collecting wrestling figures again. It was a strange time.

One thing that has always been interesting about wrestling toys were the female characters. They were always rare in the stores. They always seemed to be dressed in garish clothes too. I actually liked some of the female wrestlers though. I'll admit a few were slightly trampy in their lingerie matches, but other gals really had a sense of grrrl power. Of course time would shift again and I would lose interest in watching wrestling, much to my dad's sadness. I never did stop picking up female wrestling toys though. Well, just the really cool and odd looking ones.

Recently I came across a very rare and hard to find Velvet Sky from TNA, (a wrestling series, not a description of the toy.) Anyways upon purchasing this toy, I really found myself asking to no one in particular, "Is this toy trashy or timeless?" Why was I buying this? So let's look at some pictures and break down the toy to really see, is it trashy or timeless? 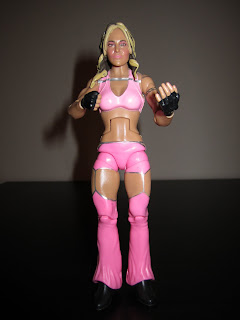 Here she is. Velvet Sky. I know virtually nothing about this character, other than that she wears pink. The pink is what actually drew me to wanting to buy this toy. I love pink. Even if said pink is involved on a questionable hybrid stripper/wrestler look. She looks ready to fight. Just look at her, she is saying, "Come closer and I will punch you!" So by looking at this toy we can see a few things. Her pants have like a split personality thing going on, as if she wanted to wear boom-boom shorts, and pieces of yoga pants, but couldn't decide which. So she picked both and attached with a silver garter instead! She is also wearing basic boring black shoes. I would expect more from Velvet Sky. Covering the top part is a hot pink sports bra with some silver lining around her collar bone. Her hands sport fingerless gloves, like Madonna. Just not as lacey. Or fun. 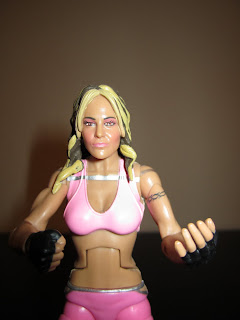 A more closer look shows that Ms. Sky has highlights in her hair and a barbed wire tattoo on her arm, how very Pamela! 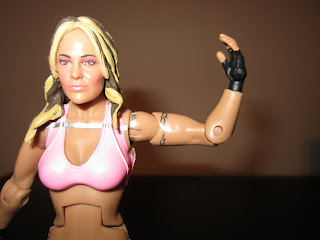 Velvet Sky is ready for the gun show! Big time. For female wrestling faces, this toy actually has a pretty face. Usually my biggest gripe with a female wrestling figure is that the face sculpt always looks rough. Like the lady got in a knife fight at four in the morning with a bear and a hobo. I have always been amazed by certain toy makers. They can go into such great detail to make male figures look life-like and stuff, but when given the chance to make a female, it is as if they have no clue about the female form. How hard can it be to make pretty looking female figures? Luckily there have been advances in toy making technology so that we don't have to be stuck with bad female toys. Although some would say this is a bad toy. I say it's just her attitude! 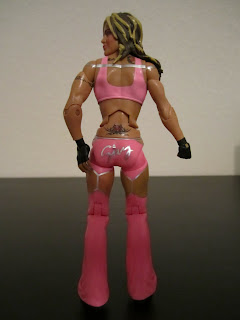 Here is where things get weird. What you are looking at is a toy. I was just as surprised as you. I was not expecting Velvet's last name to be proudly displayed on her butt. What? I was also not expecting to see a tramp stamp on this toy. Really? Look I have nothing against tattoos. I have dated guys with tattoos. I have many friends with tattoos. However this has got to be the first toy I have ever owned with a tramp stamp. I also just recently noticed this toy also came with shoulder blade tats as I was having her strike a sultry pose. See folks, Velvet Sky is beautiful and dangerous! 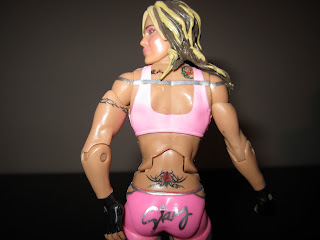 Here is a closer picture of Velvet Sky's decorations. When I saw all this I had to ask myself, "Who is supposed to be buying this?" And then I remembered, I bought this. If not for a somewhat cool older lady, I don't know who else would want to buy this toy. Maybe I underestimate other toy collectors, but Velvet Sky is really just a mess.
This begs the question, is this toy trashy or timeless? I am inclined to say timeless, because I feel like I could show this toy to people 50 years from now and they would be like, "What is going on with this?" However I have to go with trashy. And before anyone tries to disagree, let me explain. My choice to pick trashy has nothing to do with the numerous tattoos or the ratty Juicy Couture wannabe "Sky" booty pants. The trashy vote is cast because of her hair. Take a look: 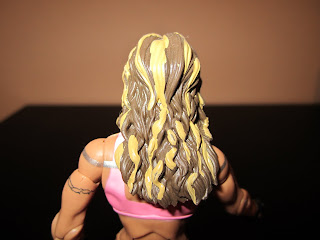 Really? Jakks Pacific (the toy company that made Ms. Sky) went into such great detail about the tramp stamp and other features on Velvet, but they totally botched her mop of a top hair. It looks so bad. The most distracting thing about this toy, is the hair. That really says something, because homegirl has a lot of stuff going on. And I mean a lot. Don't you just want one though? A mess!
So there you have it, the first edition of Trashy or Timeless. I hope it was everything you wanted it to be! Velvet Sky may be holding a Trashy title belt, but she probably won't be the only one! Check back soon for the next edition! I've got a lot of kooky stuff!
Posted by Michael Lynn P. at 11:00 PM