From Catwoman to Gummi Bears... there is always a new twist and turn with Toy Chest Tuesday! Gummi Bears was a Disney animated show that aired from the mid '80s until the early '90s. The basic premise was that a group of magical bears called Gummi Bears lived in a Medieval world where humans had no idea of their existence. Long story short there were some humans that would find out about the Gummi Bears, some of these humans were good and some were evil. There was also a group of "bad" bears called the Barbics. The show and characters were actually a really big deal. This show was Disney's first foray into an animated serialized show and it actually lasted a long time with new content. I believe there were 5 seasons. The characters also had many dedicated followers.

Anyways this post is not about the details of the old cartoon, but instead about some toys that were made for collectors who liked their Gummi Bears to made out of plastic... and not gelatin. Fisher Price had actually come out with a line in stores based on the Gummi Bears, but it was Kelloggs that drove collectors into a frenzy with their pvc premium cereal treats.

Similar to the Rescue Rangers pvc toys from Kelloggs, the Gummi Bears toys were just as popular. I am not sure about all the characters that Kelloggs released, but I do recall Gruffi, Tummi, Sunni, and Cubbi being a part of the lineup. The names of each Gummi Bear also informed the audience about their character traits. Tummi was the slightly overweight bear that loved to eat Gummiberries. Cubbi was the youngest bear and full of mischief. He was always starting/getting into some form of scheme or another. Those two bears never found themselves in my collection, but Gruffi and Sunni did, so let's check them out! 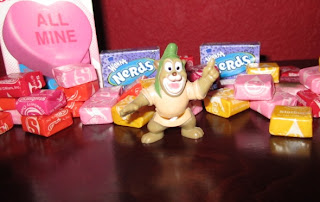 Here we have Gruffi, the Gummi Bear leader. He was very serious and always fixing things that were broken. He was also very distrustful of humans. Looking at this version of Gruffi, I would not suspect him to be that "gruff." He actually looks kinda happy and sweet. Anyways this figure came in a box of cereal and is about 2 inches tall. These pvc toys really captured the look of the Gummi Bears. The Fisher Price figures came close, but they were nothing like these little pvc figures. 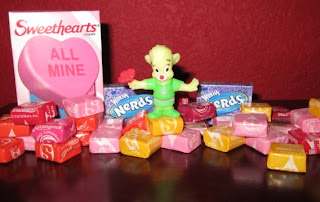 The next Gummi Bear we will be looking at is Sunni, my favorite Gummi Bear. (Shocking, I know.) Sunni was the bright and cheery bear that was interested in human life and fashion. She was girly and chic. I loved her! I also liked her color combo, the bright yellow and green was nice and bright. Perfect for Sunni! This pvc figure also features Sunni holding a flower. 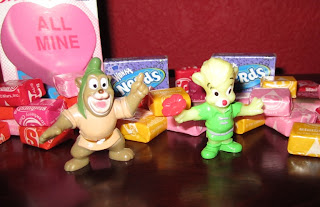 Gummi Bears were really cute and an important part of Disney history. This was one of the first cartoons that had many other great Disney shows following right behind. (Though I really wish the Wuzzles had caught on just as much in popularity.) Anyways for fans of all things Gummi, these pvc toys are not hard to come by at all. There are many listings on ebay in great to perfectly new condition. My only problem with the Disney pvc cereal premiums from Kelloggs is that they eventually smell with age. By smell I mean total crayon scent all up on these bears, but they do look so darn cute!

So that is about it for Toy Chest Tuesday! Sort of a short, but sweet, Toy Chest. There are reasons for that, as Diary of a Dorkette will be celebrating big time on July 29th! Mark your calendars folks, because I've got a lot of fun stuff planned for Diary celebrating a year on the web!!!