In keeping with the theme of Diary being around for a year, I thought it would be best to look at a very special toy from the archival vault. Now I know I have shown Mermista on Toy Chest before, but that was my old loose version. Today we will be looking at a mint Mermista from the always fantastic Princess of Power toyline!

Let's start off with why Mermista is such a favorite character of mine. I have long loved mermaids. Growing up my favorite fairy tale of all was The Little Mermaid. Now I loved the Disney feature film, but before I could read I would have my mom read me Hans Christian Andersen's The Little Mermaid. On a loop. I'd cry at every read and every time I'd hope that the mermaid would end up with the prince instead of becoming sea foam. (Just a minor spoiler alert.)

Anyways once I found out there was a mermaid character on She-Ra, I was hooked. Just completely hooked. Nothing was cooler or more glamorous than Mermista. Her semi-real French accent on the cartoon. Her friendship with Frosta. Her ability to go between having fins and having legs all without sacrificing her life... I just loved her! So let's check out the toy already! 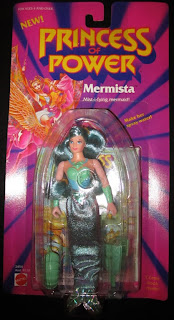 Mermista was a part of the second series of POP action dolls. The card featured the pretty star burst design with She-Ra flying around on Swiftwind. I've said it once and I'll say it again, the packaging for the POP toys was just the best. The colors and design always capture my heart. I wish Mattel would release a book of all the toy art and details of each item from the MOTU and POP toylines. Wouldn't that be the coolest thing ever?

So let me just share a brief story about how I exactly came upon my first Mermista. I hinted at it before, but here is the full scoop. Some would say I was nothing but a spoiled brat growing up. I prefer to see myself at that time as a mini Erica Kane. I knew how to bat my eyelashes. I was highly proficient in the art of blackmail. My outfits were fabulous. And though I never stole a baby, I did steal someones Love-a-Lot Care Bear. (Don't worry, I gave it back.)

Growing up I was also given the message that I could only speak when spoken too. Kids were only allowed to speak with other kids, at birthday parties, or when in your own bedroom. Before 9 pm. Needless to say I hated formal adult events like weddings or really anything where I was supposed to sit. In silence. I have always loved to talk. So there was this family wedding I was supposed to go to with my parents. I kindly refused. There was no interest or desire to go on my part. The wedding was from my mom's extended side of her family, and we weren't that close to that side. So I really felt like the whole event would be positively boring.

Anyways my mom tried to strong arm me into sucking it up, putting on a pretty face, and going. I refused. I was after a trade. A total, "I'll go, but it will cost you" sort of thing. I mean there are celebrities that don't get up in the morning unless they are gonna make at least 10,000 dollars for just breathing. All I wanted was a POP toy to soothe my troubles for having to sit in a stuffy church. In silence. My parents gave in and that is how Mermista and I became a part of each other's lives. It was worth it. I was ecstatic and for about a week I wanted to be called Mermista. I also love that my parents have never forgotten that story ether.

This mint version we are looking at today was acquired on ebay. No bidding war required, as it was a 'buy it now' at one steal of a price. Ok, enough of the story, let's look at some more pictures! 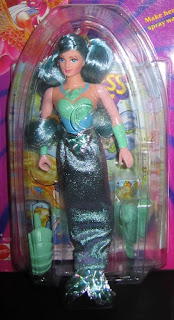 Here is a closer photo of Mermista. She came with a shield, comb, and seashell squirter backpack. She also came with a comic book entitled, A Fishy Business! Her hair was also styled in two ponytails that were so pretty. Also, pay close attention to the detail on her tail and fins. The sparkle effect is so pretty with the shades of silver, blue, and green. For me, Mermista was one of the prettiest looking action dolls from the POP line. (My only gripe involved her swivel neck/head piece, like a Barbie.) 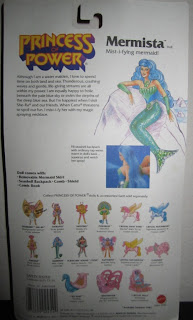 Here is the card back. Like the other card backs for Series 2, the top portion features a brief bio with a drawing of the character. Below is a description of the action feature, and even further below is a line up of all the goodies from Series 2! I think we need closer photos, yes? 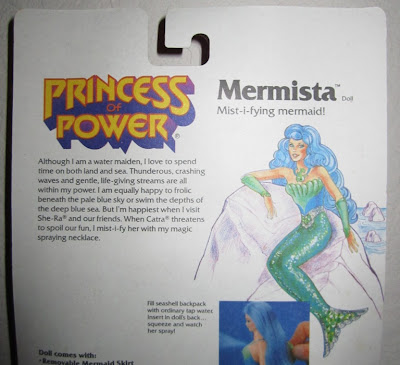 This picture details more information about what Mermista comes with and how her action feature works exactly. She had a hole in her back (which always kinda freaked me out growing up) and the seashell backpack, when filled with water, would release the water from a hole on her necklace. I only used this feature once. I was never one for getting my toys wet. I was always afraid water would damage my stuff. Neurotic and a mini Erica Kane? I was a hot mess child. 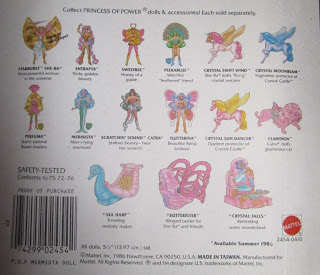 As I have mentioned before, the first series of POP toys had a theme going on. Each character had a designated color and jewel attached to them. Bow didn't have a jewel, but he had his cool beating heart. Also the characters from Series 1 fell along the lines of being human. Angella may have had giant wings, and Catra had her tail, but each figure was basically a human with some special feature. Like Glimmer lights the way. Castaspella enchants with spells. Frosta is icy.

Well Series 2 was more about the toys being half human and half something else, not to mention that each character had a color combo, instead of just one sort of color. Flutterina had her butterfly wings with some light purple and peachy orange. Mermista was a mermaid with blue and green coloring. Peekablue was a peacock with some citrus green and sky blue. Perfuma was a sweet smelling flower with an even sweeter pink and green color scheme. Entrapta had hair that reminded me of snakes... bright purple and pink snakes with some flashy gold. Sweet Bee was a bee dripping in honey yellows and pinks with a swath of electric green shadow. Even Catra was more cat like this go around with her silver and pink tiger stripes. (Though there were some toys that still came with a jewel, like Sweet Beet, Catra, and She-Ra.)

What I like about that lineup is that the second series POP line featured some of the weird mash ups that were usually reserved for the Masters of the Universe toyline. Granted these gals didn't look like full-on other species like Buzz-Off, Stinkor, or Mer-Man (to name a few) but it seemed like there was more of a hybrid element with this series. I liked that and the Series 2 theme wouldn't really be replicated with the third and final series of POP toys. So this series, featuring Mermista, is one that holds a special place in my heart. And really when it comes to POP, how it could not hold a special place in one's heart? There was really nothing else quite like this toyline. Maybe some imitations here and there, but really, POP was one of a kind. So happy Toy Chest Tuesday folks! Enjoy the pictures and be sure to check back soon. There is always more to come!
Posted by Michael Lynn P. at 2:59 PM