Remember a few posts ago when I lamented my sad existence over a Toy Regret for never being quite bright enough to pick up any Jem dolls back in the day? Well if you have forgotten go here to catch up. For those who remember, I briefly teased that all might not be completely regrettable in the world of toys, because it looked like there was a Jem doll in my life after all.

So in honor of a whole new Jem line, there is no better way than to celebrate a new Toy Chest Tuesday by looking at a priceless Jem of yesteryear, Rock 'n Curl Jem!

Hasbro released this Jem doll in 1986. She came in a much smaller package unlike the regular line up of Jem dolls. This doll did not come with a stand or cassette. But she did come with some cool stuff, so let's look!

The packaging for Jem dolls was always one of my favorites. The bright pinks with purple, yellow, and orange was just a lot of fun. There was so much brightness, with a dash of cool star power. It was very much a late '80s style. Anyways the tagline for Rock 'n Curl Jem was, "With a wild new hairstyle- long and curly!" This version of Jem came with really long hair that had some curl to it. The purpose was to create different and unique styles for Jem. She also came with a stage fashion, earrings, two bracelets, pumps, hairpick, and a microphone. 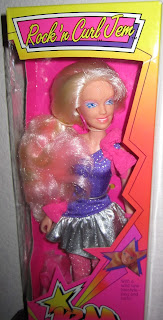 Here is a closer look of the doll. I am still weary of removing her from the box. For now this Jem will stay mint. As you can see her hair was long, much longer than the other Jem dolls. There were also streaks of pink in her blonde hair.

One side of the box detailed exactly how Jem's hair could be rocked out for some fun looks.

The description explained for us to "style Jem's long, curly hair!" Can I just say styling a doll's hair was always easier than it looked. I love how the pictures made it look so simple. I don't think I could ever style a doll's hair like the pictures above. It would just look like a mess. I once cut a Barbie doll's hair because I wanted her to have a new look. Her "new look" came with some bald spots and an eventual buzz cut. I'm not a talented person at all.

The back of the box was really cool. There was a full sized photo of the doll and here you can sort of see how large the Jem doll was. At 12 1/2" inches this doll was massive compared to other dolls. Her body was normal for a doll. Usually dolls have tiny sickly looking bodies. The Jem dolls were like, "We're healthy, but we also know how to enjoy a cheeseburger." She also had articulation at the wrists, which was yet another reason as to why this doll was different from Barbie. (Or at least the Barbie dolls of that time. There wasn't that much articulation in an old school Barbie.) Jem dolls always seemed like a special breed of doll. I don't know how to explain it exactly, but I wish I had collected them when I was young. Oh how dumb we are in our youth. The lace pink bows were also such fun additions to this doll. The whole stage fashion was a recreation from the animated cartoon. I believe this look was featured in the later series of the cartoon.

The use of music, fashion, and glamour was such a big part of this line. From the dolls and accessories to the fantastic playsets, the Jem line was one of a kind. Sometimes dolls get a bad rap for being pieces of plastic that are supposed to stand around and just be pretty. Jem though seemed to incorporate multiple aspects for a truly outrageous and interactive experience for fans both young and old.

Thanks to ebay I was able to pick this doll up at a really decent price. I'm glad I can say I have at least one Jem doll. So enjoy these pictures of Rock 'n Curl Jem! Be sure to comment your own memories of Jem dolls. Did any of you have Rock 'n Curl Jem? Were you able to do some fun and crazy hair styles? I look forward to finding out!

Also be sure to check back soon as I crown a new Heroic Hottie for the month of July this week!