Ok. So the running joke is that I keep saying I am going to post the Top Ten Toys of 2012, but other things keep popping up. Like for instance I was running errands, trying to finish the last few things of Christmas Madness and what-not. While out and about I found myself stopping by the magazine rack at a Target store. I've been doing my best at not constantly having to purchase magazines, because I am three steps away from becoming a full fledged hoarder and recycling simply means that I move my magazines into a different storage containment.

So as I was perusing the periodicals I noticed an all new Nintendo Power Magazine with free poster and a cover that reminded me of the very first NP issue from way back when. Every now and then I pick up the latest Nintendo Power because it is a quite enjoyable read and I love the articles they do on games/systems from yesteryear. After reading over the cover of the magazine I saw something I never thought I'd see, Final Issue- 25 Years of NP History. What? I couldn't believe my eyes.

I immediately purchased the magazine and marveled at the accompanying poster that had a mini image of every single cover throughout the magazine's run. So it is truly game over for NP magazine. I can't believe it. 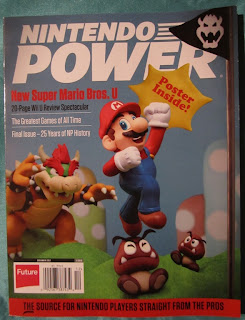 In a way I guess I am supposed to. After all magazines have been folding left and right since everything seems to be heading towards web based content, but it just feels so weird that NP will not be available in a hard copy format. (If you hadn't noticed yet I am a huge fan of books and magazines.)
I remember getting the first issue and being unable to put it down. There were so many cool dorky things in that magazine. One of my favorite covers was of Maniac Mansion. NP was truly the source for all my Nintendo information. Had it not been for NP I never would have learned anything about Final Fantasy IV (then called II.) I got to read and see about all these great new worlds that were going to be right at my finger tips. Sometimes I enjoyed reading about a game in the magazine then I did the actual game.
Here is the poster! 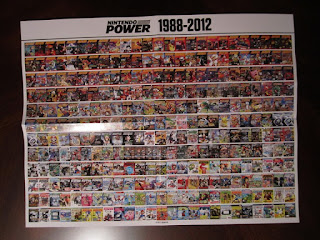 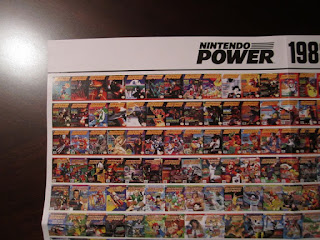 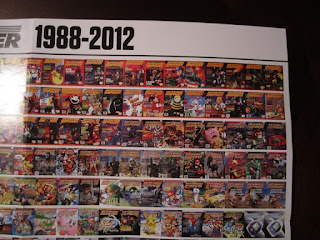 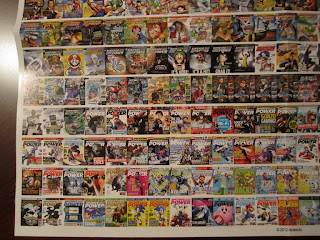 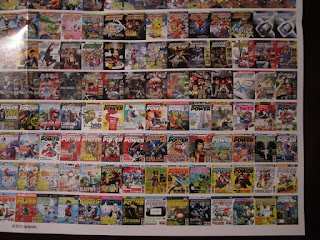 First ToyFare and now this. Of course, at least Nintendo Power got a farewell issue. ToyFare just vanished. So was this a surprise for anyone else? The last issue I had purchased had been in September and there was no hint that anything was afoot.
The issue is still for sale and it is nice. I haven't read it all yet, but from what I can tell there is a great deal of content celebrating NP. There was also some information on the Wii U as well as game reviews. If you are a fan of this magazine I highly urge you to run out and pick it up. (Now if only they could create a massive archive so we could purchase/peruse older issues.) There is also a very nice Nester comic at the end that is a big tearjerker. At least for a Dorkette like me. Anyways, farewell Nintendo Power!
Top Ten Toys of 2012 will be coming up soon! I promise.
Posted by Michael Lynn P. at 6:45 PM