Alright, Toy Chest Tuesday is winding down for the end of the year. As usual, I had planned a much different toy to fondly look back upon today. Sadly I have been sick. As in the kinda sick that drives me crazy. I've lost my voice. My brain has been jostled so much by all the coughing. I had a fever that broke in a truly out-of-body kind of experience. I'm just exhausted. But it is Toy Chest Tuesday. So I will try to give you all some good toy talk.

Now I am not really sure how I ended up owning this toy back in the day, but I am certainly glad that I did. I feel like for a lot of collectors, those collecting tendencies truly begin while we are young. Like growing up I knew there were things that I would own because I really liked them, but then there would be things that I would look at and just say, "That is really neat!" I knew I had no real need for it. It wouldn't even be a toy that was being marketed for me. But I was that strange kid that wanted everything. It was like I knew the importance of owning things for historical significance. Or something. This of course was my relationship with Pocket Power toys by Sega and Tyco.

The toy line consisted of mini toys/games that came right out of a small black tray. They were very basic toys but were really interesting. And before I go any further, I want to share a very important site that gave me some information about this toy that has been sitting in my archival room next to some Keypers. Pocket Power Toys is a delightful site with a wealth of information about these toys that even I was unaware of. So stop by and check it out.

For now, let's check out Glo-Bones! 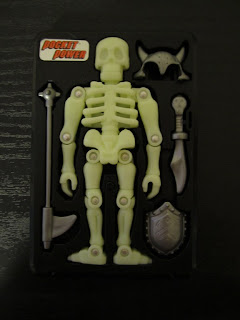 Glo-Bones was your basic skeleton. Except he glowed in the dark, had very nice articulation, and an assortment of weapons/armor. I personally love the compactness of this toy. I understand this toy is supposed to be cool and bad ass for guys, but I can't help but think it is so cute. I think it is so much fun that this tiny black tray holds the skeleton and all his pieces. It is just really cool. Since I have long parted with the packaging for this guy, I am not really sure what his story is. But that is also the beauty of this toy. He is some mysterious skeleton warrior named Glo-Bones. The possibilities for his story are endless. 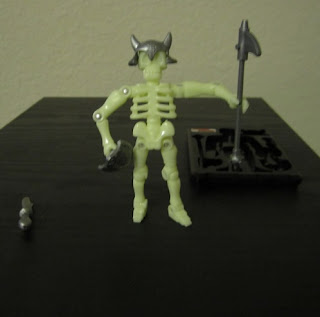 I hope this picture can capture all the various points of articulation on Glo-Bones. I think this was the first toy I ever owned that had so much articulation. His skull can slightly open around his mouth. The arms have full rotation at the shoulders and also bend at the elbows. The hips have full rotation and the thighs can swivel while also bending at the knee. Even the ankles have movement. This toy came out in 1988, and I am just amazed at all this articulation. I've always thought of articulation as one of those extra fancy features that was only available on the high priced toys of the future. 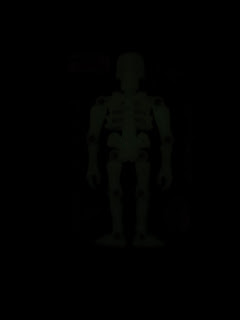 Of course to keep in tune with his name, Glo-Bones did indeed glow in the dark. (And still does too!) I actually think this was the main reason I wanted this toy. I was obsessed with toys that either smelled, glowed in the dark, or had glitter embedded in the plastic. I mean it is all about the simple things, right? 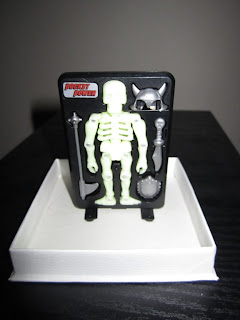 I forgot to mention one other thing about Glo-Bones. There were two panels that folded out from the bottom so the tray could also stand upright. For me, this gives the impression that Glo-Bones is ready to walk right out of his Pocket Power tomb to haunt around his familiar stomping grounds.
So that is about it for Glo-Bones. I highly encourage you all to check out Pocket Power Toys, the creator of that site really pulled together a great resource of information about these toys. Since I was never a big time collector of this line, I have been enjoying reading over the other items that Sega and Tyco offered.
Alright, another Toy Chest Tuesday is gone and we have one more left in 2012! I am very thrilled for the next Toy Chest Tuesday, because it is going to probably be the biggest one I have done all year. I'm talking an epic sized Toy Chest Tuesday. You will not want to miss it. So I am off to focus on coughing up one of my lungs. (We don't need both right?) I hope you are all well. Take care and until next time!
Posted by Michael Lynn P. at 5:36 PM