Take a Guess on Astro Fashions!

So every now and then I post things about custom projects that I dabble with. When I say custom projects, I don't mean like the heavy duty stuff with sculpting and making a whole new toy. No, no, no, when I say I like to dabble with customizing it is more like putting something together on pre-existing items. I like to call it, toy styling!

For example, I have styled dolls to look like characters from Jem and I even put things together to make a really nice custom styled Glimmer doll. Well folks, I am at it again. But before I unveil the final product, I have just a few more things to do. However, I wanted to slightly tease who might be getting toy styled! 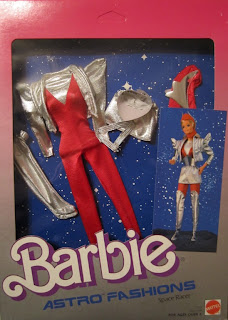 So some of these items of clothing from this vintage Astro Fashions set will go towards a brand new doll that will share the likeness with a secret character! Can you guess? I have been wanting to make this custom styling project for some time now, and it is finally coming together! 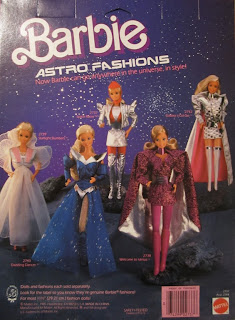 If we turn the box over, there are actually a few other Astro Fashions that could be used for all kinds of other toy styling projects. Since Barbie and the She-Ra toy line came from Mattel, there are actually some similarities between the clothes that both Barbie, She-Ra, and She-Ra's friends were wearing during that time. I actually love to look back at a lot of the fashions from the 80's and early 90's because they really lend a hand to recreating all new POP Barbie dolls. (I guess I should say that as much as I love She-Ra in figure form, I would also love some great She-Ra dolls.)
So by now it seems like I may have given away which character I am trying to style and create in doll form. But can you guess? Any ideas? If you have absolutely no idea what the heck I am talking about, don't worry. I will show my little project soon, and hopefully it won't be the lamest thing since, like, ever.
Anyways, I am planning on posting the Top 10 Toys of 2012 soon, I just am waiting on something that will hopefully show up soon. There are some other great things too, I think you will all enjoy the Heroic Hottie for December. There are also other kinds of goodies coming up. So stay tuned!
Posted by Michael Lynn P. at 10:40 PM