Hold onto your controllers, because this Toy Chest Tuesday is going to be long winded. Like, really long winded. As some of you may know, I love video games. I am a child of the 80's so video games have been as much a part of my life as air or McDonald's. Now here's the thing, I am not big on competition. I've never been good at it. I'm average at best for most things in this life. So my favorite kind of video games have always involved co-operative play. There is nothing better than playing a game with your friends where you are having to work together to either stay alive or solve a clue. Games like Gain Ground, Streets of Rage, any TMNT Arcade title, and of course the ultimate Zombies Ate My Neighbors were just the best, to name a few.

However there was a time when cooperative play games had sort of gone out of style. I had really missed that style of gaming until around 1997 when Eidos released Fighting Force on the Playstation (and eventually the Nintendo 64.) A co-operative resurgence came out in full force! Fighting Force was essentially Streets of Rage in a 3D landscape. Players got to pick from four characters, two women and two men. Alone or with a friend, gamers got to tear up the streets fighting the evil forces of Dr. Zeng. 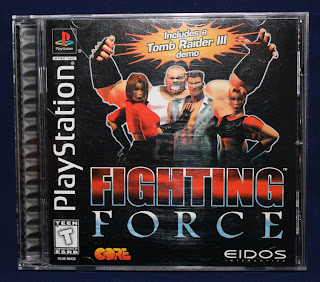 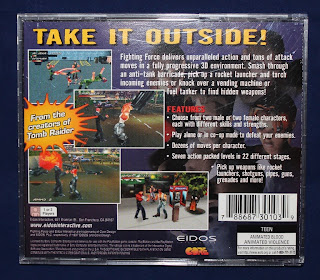 All sorts of co-operative styled games soon joined the modern video game consoles and have luckily become a staple. Now a video game isn't truly on the map of success unless an accompanying toy line is released. As was the case with Fighting Force, a toy line (by Blue Box Toys) came out celebrating the playable characters. So let's check them out for an all new Toy Chest Tuesday! 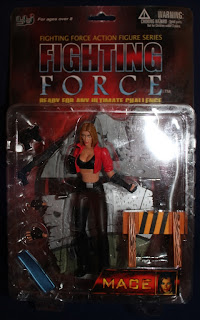 Though not the main character of this game, Mace was my favorite and one I always picked to play. She had great moves and was fast. Plus she just seemed really cool. The packaging for these toys was very simple. Blue Box Toys also packed a lot in. There was the figure, extra hands, an elaborate stand display, and some weapons. The figures were not really full of articulation, but there was some. 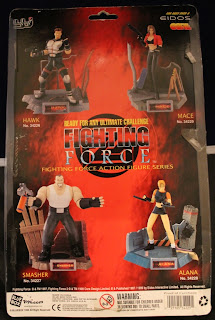 Flipping the item over, the back of the card shows off the other options to collect. The toy line was just the four main characters. Each toy came with the same types of accessories. This was actually a very nice toy line for what it was. 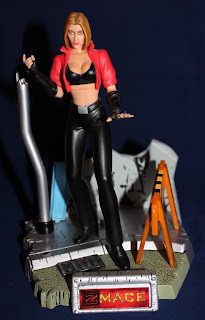 Mace is pretty sleek and cool. Her stand was a street scene and the fun thing about all the damaged items in the display were meant to mimic the playable environments that can be destroyed in the game. It was one of the fun parts of the game. 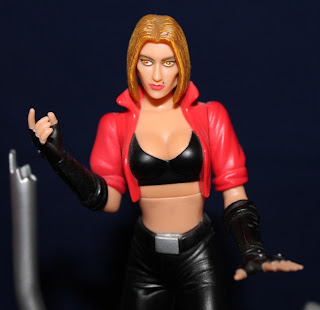 The details on these figures was decent for what was coming out in the late 90's. Mace looks pretty spot on from her video game counterpart. Her articulation was minimal. Her neck could move as could her shoulders and hands. The left arm could move up and down with ease while her right arm had more of a snap back feature. 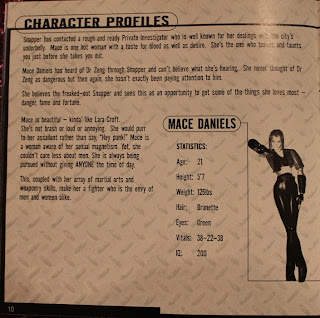 Mace's bio from the video game booklet was... interesting. Basically Mace is a femme fatale that has a taste for blood and desire. A mess. Her job as a private investigator has her involved in the various crime issues of the fictional city that the game takes place. She also has major sexual magnetism but could care less about men. Just wait, these bios get even better. 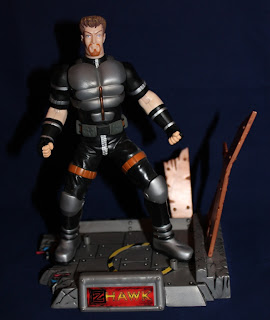 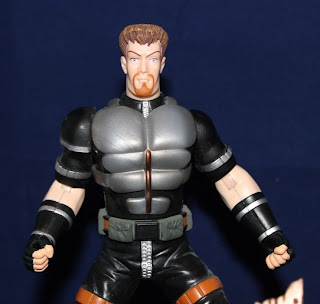 Check out that double zipper! My goodness! The articulation for this figure was very basic. Shoulders, elbows, and hands could move as well as hands. His stand is missing some pieces, and I am also missing the weapons that came with these figures. But, these were actually nice sets for the price and the time that they came out. Let's be real, you can't go into the store now and find toy lines like this anymore. 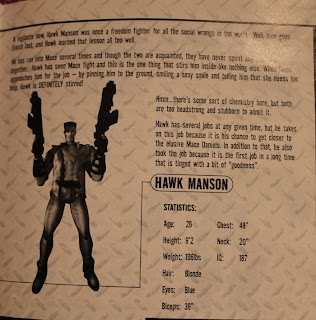 Here is a clip of Hawk's bio and stats from the video game booklet. He is a vigilante and a freedom fighter. Hawk also has a bit of a flirtation with Mace and it is a bit strange. Apparently he is stirred like nothing else when he watches her fight. I don't even know where to go with that, but I guess I can say video game bios have hopefully come a long way since 1997. 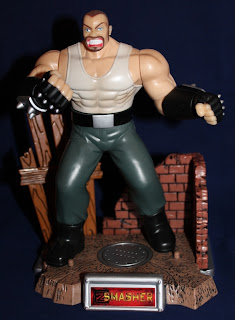 Every game must have a big brawler, and Fighting Force delivered with Smasher. Much like the brute force of the character, the action figure was also a big chunk of toy. He also had a similar articulation to that of Hawk. It is interesting, the female toys were made with a thicker rubbery plastic, while the male characters had more of a hallowed plastic. 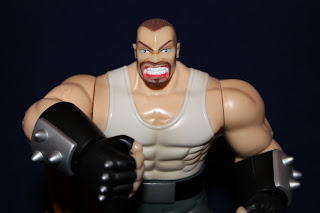 Those gums! Smasher is one angry dude! He is also the only figure that has an animated facial expression. Of course his expression is less angry and more, "I'm getting ready to have my teeth cleaned" but this is a fun figure. 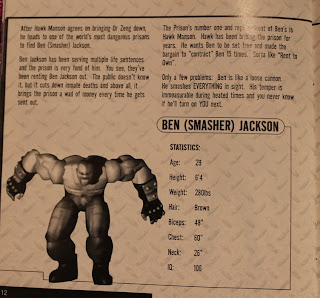 Since the four characters are all out trying to stop the threat of Dr. Zeng, each character has a different entry point and reason for going up against the evil mastermind. Smasher's bio was full of gritty 90's awesomeness. While serving multiple life term sentences, Smasher is a prisoner that is rented out for certain jobs by the prison. He also has a bit of the Hulk syndrome. 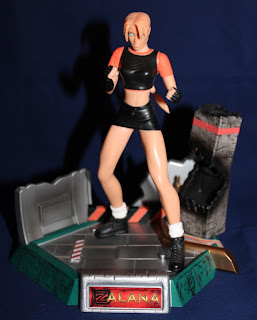 The youngest character in the game, Alana is complicated. Her action figure is pretty cool though. Her stand is one of the more intricate sets, it is full of busted out parts and tricky electrical components. I also think that out of everyone, Alana seems the least likely to kick butt, though she totally does. First of all, it is really hard to do much of anything in a micro-mini, but somehow Alana pulls it off. Secondly, Alana always had all these acrobat like moves in the video game. 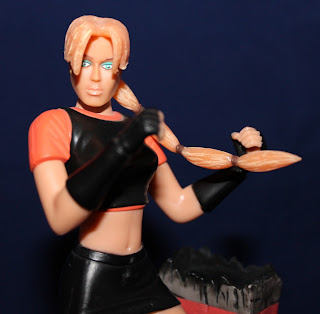 Her long ponytail has articulation! I really liked this character. Like the rest of the line, she did look like her video game character. She also had really long legs, which would become quite a theme with toy lines during that moment in toy history. 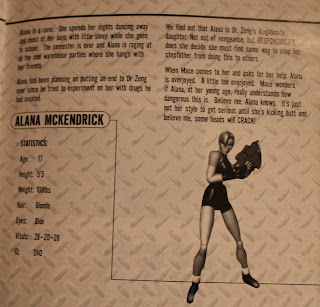 Ok, so here is where things get really strange. Out of all the bios, I think Alana has the strangest one. And no, it is not because she is a raver. What gets creepy is that Alana is one minute considered to be the illegitimate daughter of Dr. Zeng and in the next sentence Dr. Zeng is referred to as her step father. Huh? I think the bio is a little confused on her familial relationship. But wait, it gets worse for poor Alana! Like her father also experimented on her with drugs. What in the world!? Oh goodness these bios were more convoluted than the best soap opera. 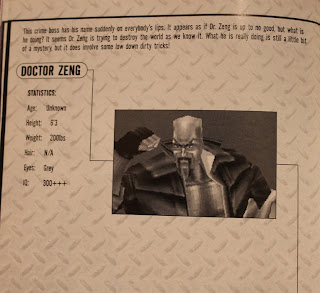 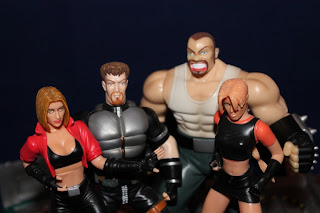 The group is ready to fight! Fighting Force was a very fun game and an even better toy line. Like I have mentioned before, toy lines based off of video games were a big deal and still are. These Fighting Force figures were some of the best for the time. Did anyone else like Fighting Force? I have some fun memories of playing that game with friends and family. There is just something fun about kicking butt with a second player. So enjoy the pictures and Toy Chest Tuesday! Take care everyone, and stick around. There is much more fun just around the corner.
Posted by Michael Lynn P. at 8:54 PM