Toy Chest Tuesday is all new! Sort of! Yay!

Since my soaps have returned from the grave faster than Jean Grey, I thought this week would be a great opportunity to look back at one of my favorite Barbie dolls ever made. I have shown her before, but I am actually going to do something wild and crazy. I'm opening her up. (Cue the soapy melodramatic background music.)

Back in 1998 soaps were all over the place, not just on television, but there was also a ton of soap opera merchandise from books, soundtracks, to actual dolls. Yes dolls! Oh happy joyous day, I still get chills when I recall the first time I saw an actual Erica Kane doll. Released by Mattel as part of a Daytime Drama Collection, All My Children fans got the thrill of their lives to actually own an Erica Kane doll. She was the first in the series. (There would only be three dolls in the line, another Erica in wedding gear and a Marlena Evans from Days of Our Lives.) So, let's check out the photos and see just what we are dealing with! 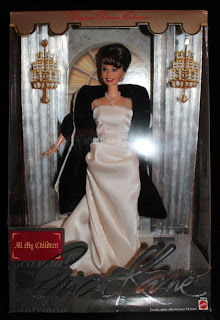 Erica comes dressed for the Crystal Ball, a story line staple during the nineties and there was one more in 2000, I believe. The Crystal Ball was always a fun event, and this version of Erica was her debut back into society from a stint in rehab. The gown that the Erica doll wears is fashioned after the one that Susan Lucci wore in the episode. The details are amazing as is the box. I remember freaking out when I saw this in stores. The price had been close to 40 or 50 dollars, depending on the store. Eventually Kay-B-Toys would end up putting her on sale for $19.99 and I quickly scooped one up as part of a birthday present to myself. It was one of the best birthday presents I have ever purchased for myself. 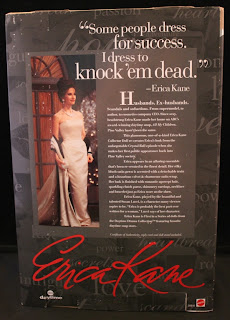 The back of the box had an image of Erica along with a description about just who this woman is. 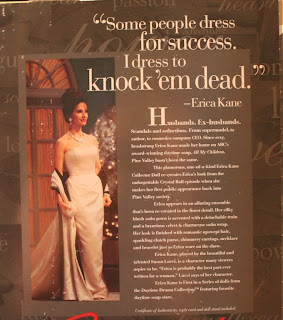 No Erica Kane bio would be complete without mention of her ex-husbands. However, Erica is truly more than just all the men she has been married to. She has long been a savvy businesswoman and a really great mom and grandmother. Even a stint in jail couldn't keep this woman down.

The doll is exquisite. I have long wanted to open this doll up, but was scared. Once you open an item up, there is no going back. But it is all good. The dress has a snap on bow/train along with a nice wrap. 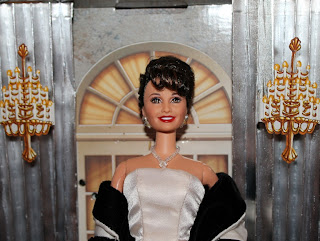 Mattel even managed to make Erica's face look like Erica. Or rather Susan Lucci. I am one of those weird soap fans that treats these characters as if they are real, and though I am highly aware of the actors that portray them, I still get caught up calling them by their character's names. Which is probably why I will never meet anyone from my soaps, because they'd be deeply offended by my dorkiness. 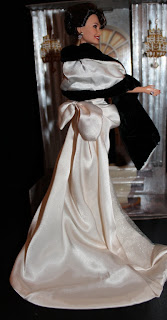 Erica is shaking hands with the Pine Valley elite! I love the sweeping train of her gown. I do love the detail that went into creating this gown. Doll collecting is a serious business. 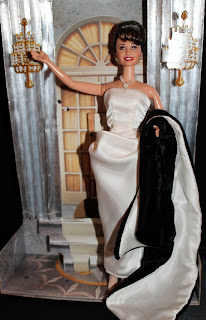 Watch out Brooke or Husband number 7, Erica is winding up for her special slugger. So many people in Pine Valley have been on the receiving end of her hand, and each time it is always fun to watch! No one slaps like Erica Kane. No one. 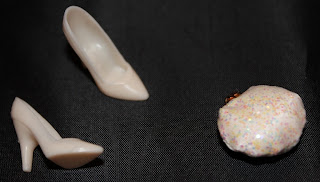 Some of her accessories include heels and a lovely clutch. Originally the clutch came attached to the doll's hand, but it sort of fell off. The elastic pieces totally dry rotted. 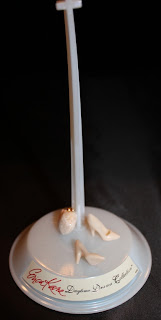 The stand for this Daytime Diva Barbie doll was really cool. Erica Kane's name was wrapped around the base along with the Daytime Drama Collection. Usually doll stands don't come with cool stickers or anything, but this one had some style to it. 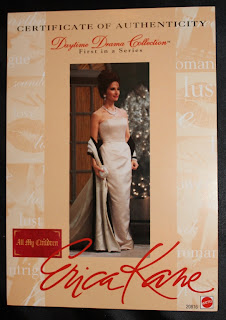 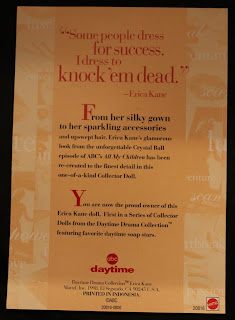 The back of the Certificate also has some basic information about the line. The thing that was the most disappointing about this line was that it ended so quickly. I would have loved a Blair Cramer from One Life to Live or a Laura from General Hospital. Either way, I am thrilled that we at least got two Erica Kane dolls out of the line.
So since we are talking about soaps, what of the new digital All My Children and One Life to Live? I am a big fan. First off the new shows are available on Hulu.com for free, or part of the upgraded Hulu Plus that costs $7.99 a month. The shows can also be purchased on iTunes; it is 0.99 cents per episode or $9.99 for a season pass of 19 episodes.
All My Children picks up five years after the ending on ABC. I was skeptical of this move into the future, but I must say, I am really thrilled with the new direction. There is plenty of mystery as to what happened during that fateful engagement party at the end of the shows original run. And now that certain little kids are now teens, I am curious to see how stories develop for the new set and the vets. Of course, Erica Kane isn't a part of the show yet, but I can bet that once she is able to show up in Pine Valley heads will roll.
One Life to Live is also really good. This show is in real time from when it ended last year. There is a different feel to the show in certain regards, but it is still good. The chance for yet another rivalry between Viki and Dorian is truly all this soap fan could ever ask for. Also, the ending for the first episode was truly shocking. I had no idea they were going to pull out all the stops for that ending.
It is great to see these shows back. There is a an edgier feel to them in terms of language and certain suggestive scenes, but the shorter length in episode time (shows are about 27 minutes)  allows for a faster storyline. For example, everything that occurred in the first episode would have probably been drawn out for an episode or two during a regular broadcast. So the soaps are back, and they are very good. I am really excited to see where they go from here on out.
So that is it for this Toy Chest Tuesday! I hope that everyone is doing well. And if you happen to be a soap fan, what do you think of the new All My Children and One Life to Live?