Toy Chest Tuesday is back and full of all new stories and fun pictures of toys from yesteryear. This toy is really perfect for the "Chest" of Toy Chest Tuesday. Now these toys we are looking at today had the key to my dorky little heart for sure. The year was 1986 and Tonka was making more than just trucks. There was quite a girl toy renaissance in the 80's that went above and beyond just dolls. There were plenty of gimmicks to be had and pretty much most girl lines had something unique to offer. Tonka's Keypers line was full of cute colorful animals that had a key to unlock what was essentially storage components inside the toy's body. There were larger sets (the adults) that came with a key and a little pvc character called a Finder. There were also baby Keypers, they did not come with a compartment to unlock, but had more of an opening that you just slid open and it was basically a chest for all your toy treasures.

I was obsessed with these. I had a friend who had almost all of them. It was only a matter of time before I managed to add a few to my collection too. So let's check them out! 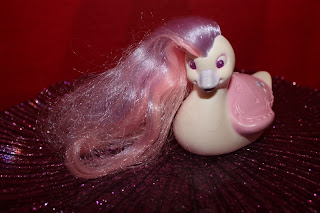 The Keypers were categorized into animal type. There were swans, snails, ponies, and dogs to name just a few. Belle was the baby swan. This version was from a second series and featured long lovely purple and pink hair. Her eyes were glittery, and the glitter has really managed to last after all these years. She also reminds me a bit of Enchanta from She-Ra, like they could be related. The Keypers characters could totally fit in with the She-Ra universe for sure. 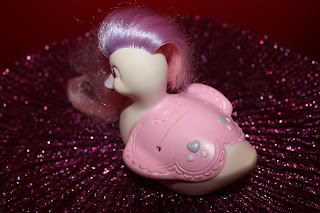 As you can see, there is the little opening for all sorts of treasure to be stored. It was sort of like a little coin purse. I never really put anything in Belle. I was slightly disturbed by the whole gimmick and I was concerned that something tragic would happen to Belle while trying to hide something in her insides. 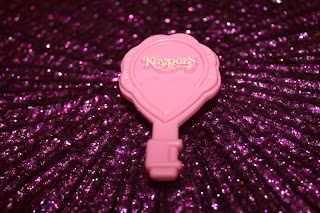 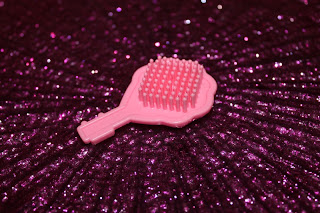 She came with a pink brush too that resembled a key. Using the brush after all this time is pretty silly. The hair is just too ratchet to be used with a brush. But, I totally love the Keypers logo! It has just a fun charm about it. 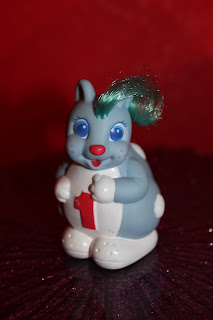 I clearly was delusional. I wouldn't get that baby brother until 1988, and he certainly would not end up looking like a blue kangaroo, but Little League was the next best thing until my brother's arrival. The kangaroo Keypers all had a sports theme and Little League was clearly the little baseball player. I thought he was just the cutest thing ever. 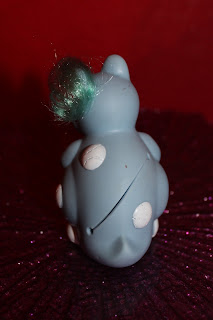 Those are not kangaroo pox on his back, but more like baseball bumps(?) I am not really sure what that was all about, but it didn't really matter. Little League also came with some accessories, I believe a bottle, brush, and blanket, but I have since lost those. Little League came with so many accessories because he was from the first series of Keypers. Sadly the kangaroos would not be released in the second series. And like the swans and other characters, the second series of Keypers would lack the number of accessories from the first series. There ya go, all the Keypers knowledge you ever needed to know. 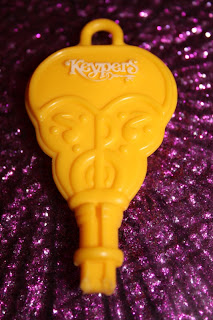 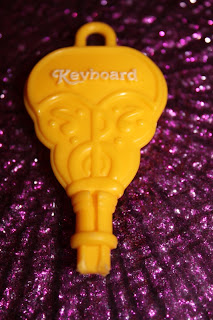 I also managed to somehow end up with a Keyper key. (I still don't exactly know how I ended up with this piece.) It belongs to the penguin Keyboard. It is cool because on one side is the toy logo and on the other side is the penguin's name! I love that attention to detail. Check out more pictures of him at Ghost of the Doll, one of the best sites dedicated to girl's toys.

And thus concludes an all new Toy Chest Tuesday! Does anyone else recall the joys of Keypers? I kinda wish they'd get a comeback, because these items are expensive on the secondary market now. Anyways, take care everyone, and keep it here. There is plenty of excitement
Posted by Michael Lynn P. at 6:26 PM