I Am Elemental Reviewed!

The holidays are over and while your favorite toy soap opera is gearing up for 2015, I thought it would be lovely to look at a new cool action figure line called I Am Elemental, and just why we all need to be playing with power.


A number of months ago I wrote about a KickStarter campaign for a female action figure line called I Am Elemental. Julie Kerwin and Dawn Nadeau are responsible for the vision of this toy line and within two days the project was fully funded on Kickstarter. There were different levels of contribution, most of which involved receiving some or all of the figures from the first series. I contributed because I believed in the message behind this line, but even if the message was not there, I would have still been thrilled and intrigued by the look and style of these figures.

Let's talk about the message of these figures though real quick. Julie and Dawn wanted a line of female action figures with a positive message and image for children, particularly young girls, to look up to. Let's face it. Most female action figures are designed in highly sexualized ways with emphasis on large breasts and skinny on everything else. Now, let me be clear because I know this topic can be touchy in the toy world. I know there are fans of the exaggerated female (and even male) form in the world of figures and collecting. I understand that, but I think that we live in a world where there can be a variety of options for how female action figures can be represented. I like the idea of a female action figure line focusing more on themes of empowerment as opposed to giant breasts on a stick figure. At the same time, I own female action figures with all manner of exaggerated body types. I get that it's all fantasy and part of a made up world. However, not everyone wants to play in the same world. So I think this is a lovely line that is perfect for young folks, but can also work for adults as well.

Once the line was fully funded, backers were told to expect their items to arrive sometime in December. I was expecting two figures and an exclusive figure in blind bags along with a card that featured art made up of the name of every backer from Kickstarter. I was incredibly giddy when the box arrived in the mail, so enough of the rambling, let's check out the figures!

Each one came in the same blind bag. 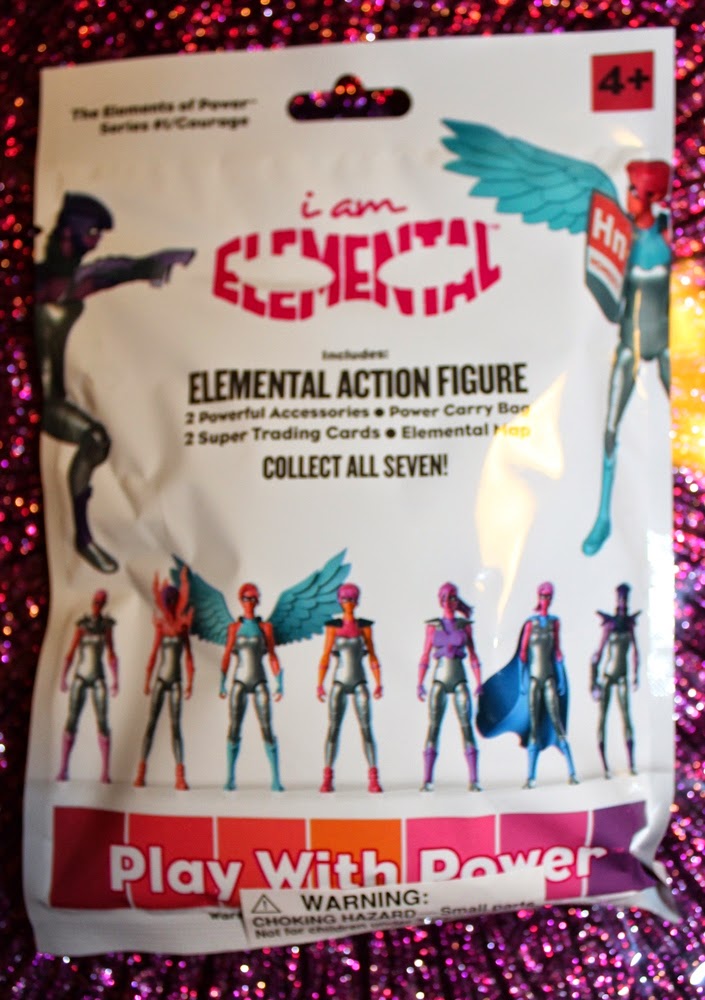 There is a great deal of information on the front of the bag, with the full line up of the figures at the bottom and two larger images of the figures at top. Let's face it, who doesn't love a blind bag? The crinkle sound and the anticipation of what is inside is one of the best feelings ever. Plus I simply want every single figure from this line. I also like the logo for I Am Elemental. The domino mask used for the word Elemental is just perfect and really ties in well with the figures and their masks. The blocks underneath the figures are also color coordinated to the figures while also serving a double purpose to coincide with the theme of the elemental table. (More on that in a second.) 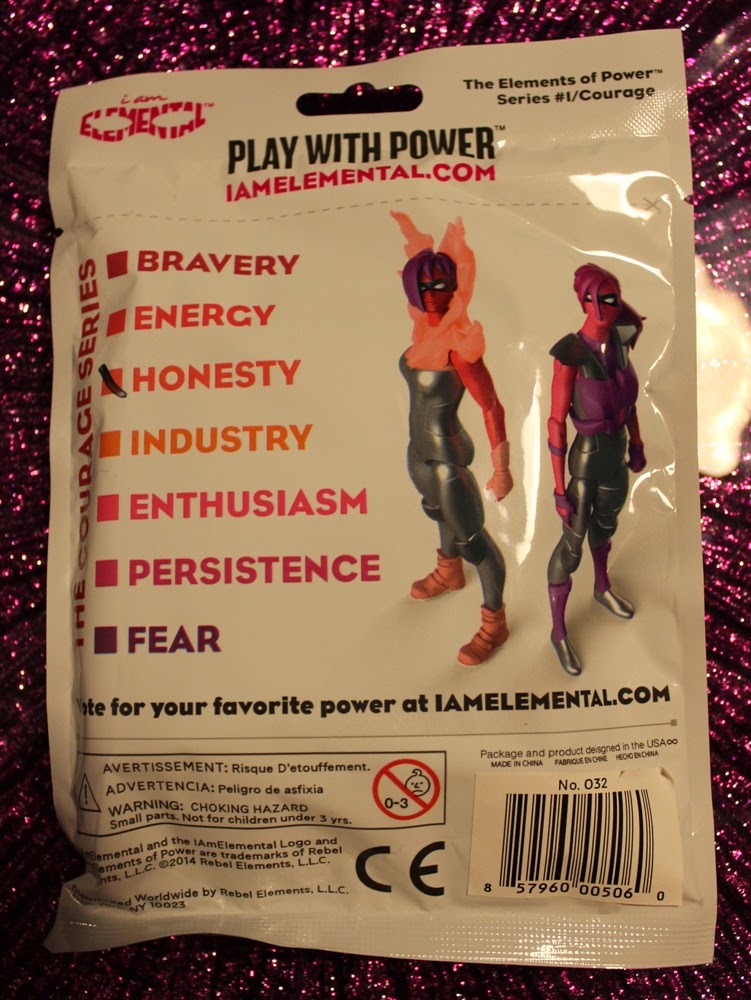 Flipped around the blind bag shows off the list of the figure's names with a mark detailing which figure is in the bag. Side note, this is really how I like my blind bag figures! While it is always nice to stand in a store for over an hour feeling through each bag... blindly... it is nice when we can all just cut to the darn chase. The names are elements of courage, which is the basis for the first series. Now, let's check out the figures themselves! 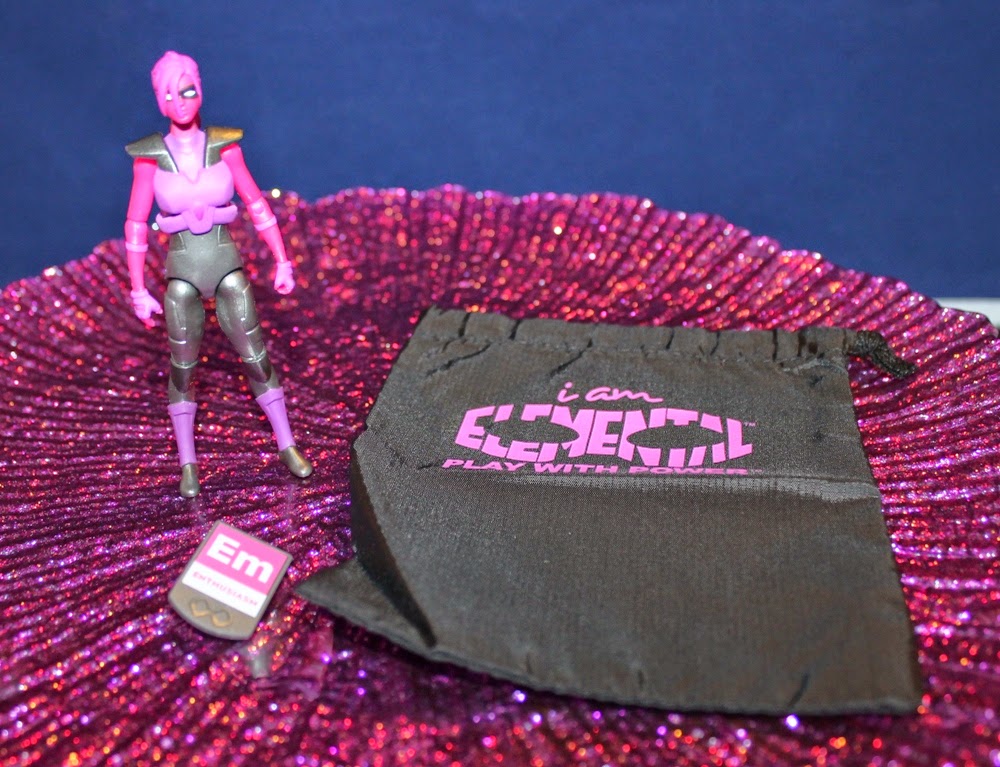 Enthusiasm is full of purples and pinks and a removable chest piece. Her shield has the elemental abbreviation on it with the word Enthusiasm underneath. Each figure also comes with a bag to store the figure and items in. More details on other included items and articulation in a bit. 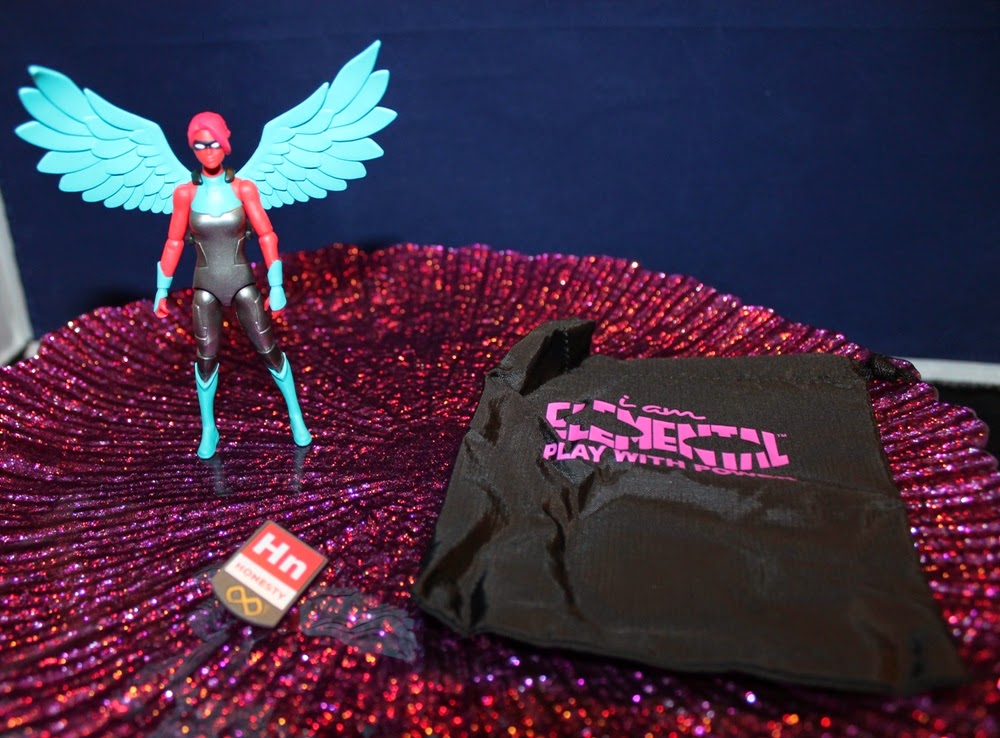 Honesty was the second figure I received from the Kickstarter campaign. She also happens to be one of my favorites. Her wings are attached like a backpack and the detail and coloring is simply amazing. The shield is like the other shields for this line though the color on it matches the Honesty figure. On a side note I really like the use of color in this line. The bright colors used for their skin is nice and sort of reminds me of the vintage C.U.T.I.E. line, except these are four inch articulated figures. For those who want to know what a C.U.T.I.E. is, head here. They are not the oranges! 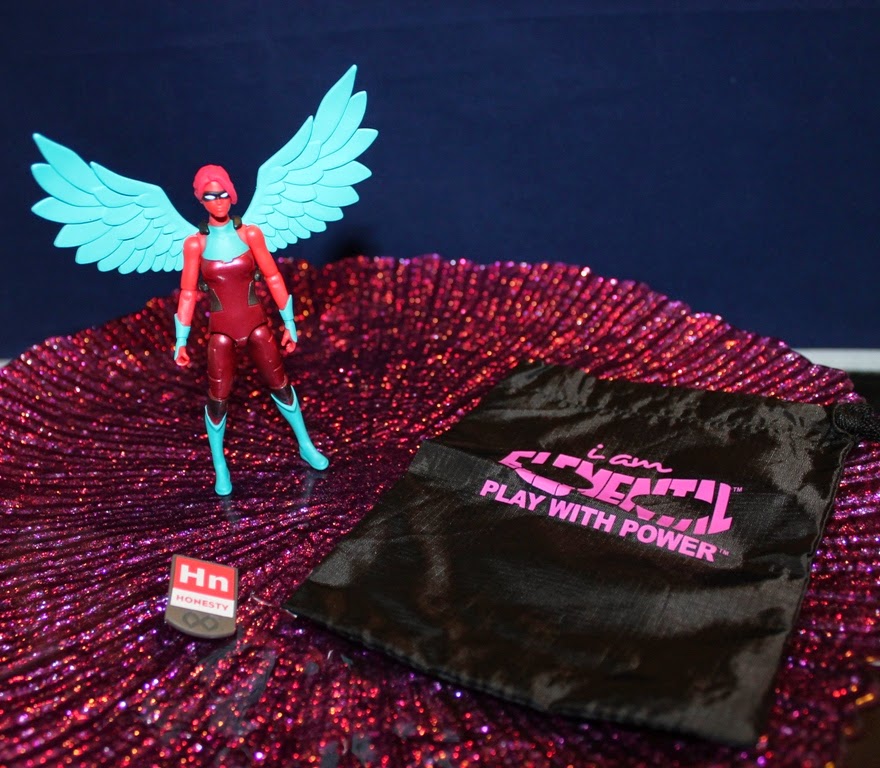 For pledging over a certain amount to the Kickstarter campaign, supporters of the line also received an exclusive Red Honesty figure. This figure is exactly like the original Honesty except that her gunmetal suit is now a metallic red. This is a nice exclusive figure. The stand out piece with Honesty for me are the wings. I just think the wings are a great touch. 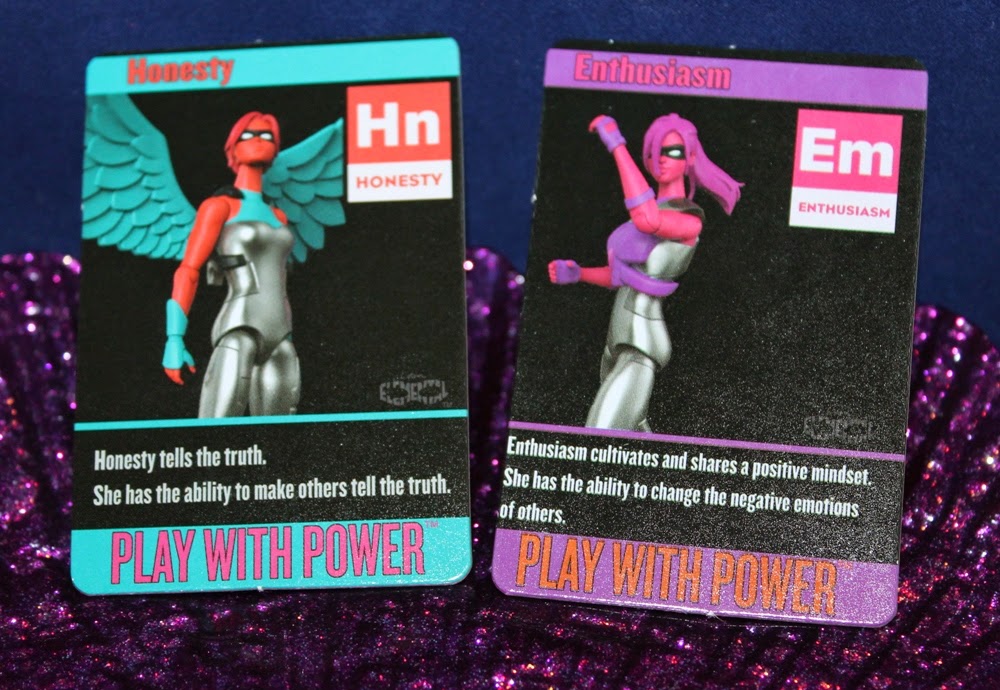 Honesty and Enthusiasm also came with little trading cards. There were two of the same cards included with each figure. When fully collected there is a message on the back of the cards as well. I like the pictures of the figures as well as the description of the elements. There is no cartoon or comic for these figures, so there is a great deal of openness with who these characters can be and really lends itself to the imagination of the person playing with power! 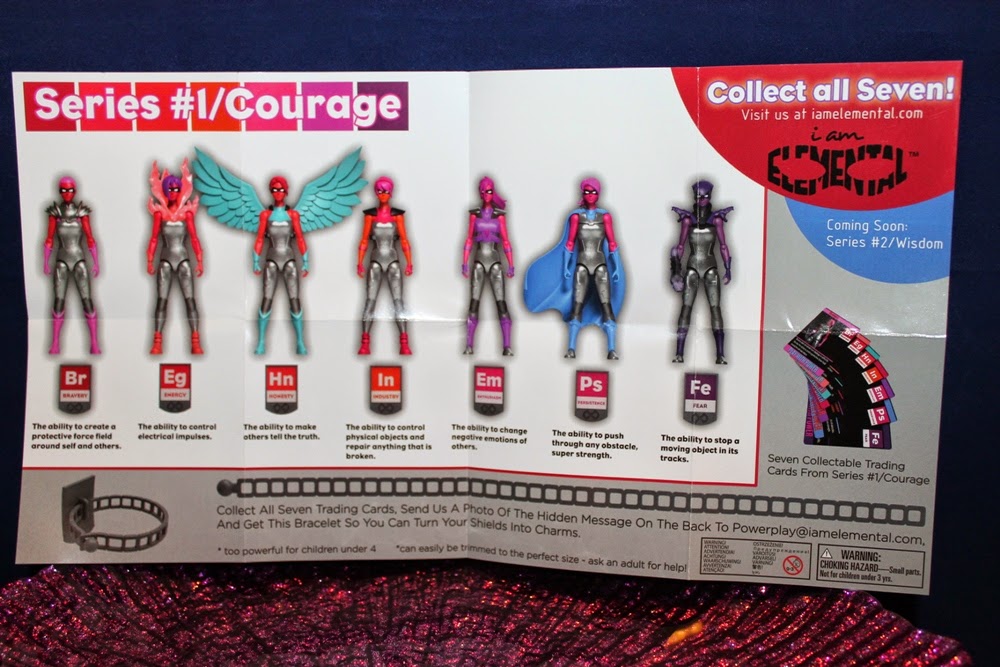 Collect all seven the fold out says! I want all seven so badly. I like Fear, Bravery, and Energy. They look so amazing. Persistence maintains the traditional looking super hero style with the cape while the whole line up looks really great. There are also details about creating a charm bracelet with all those shields. 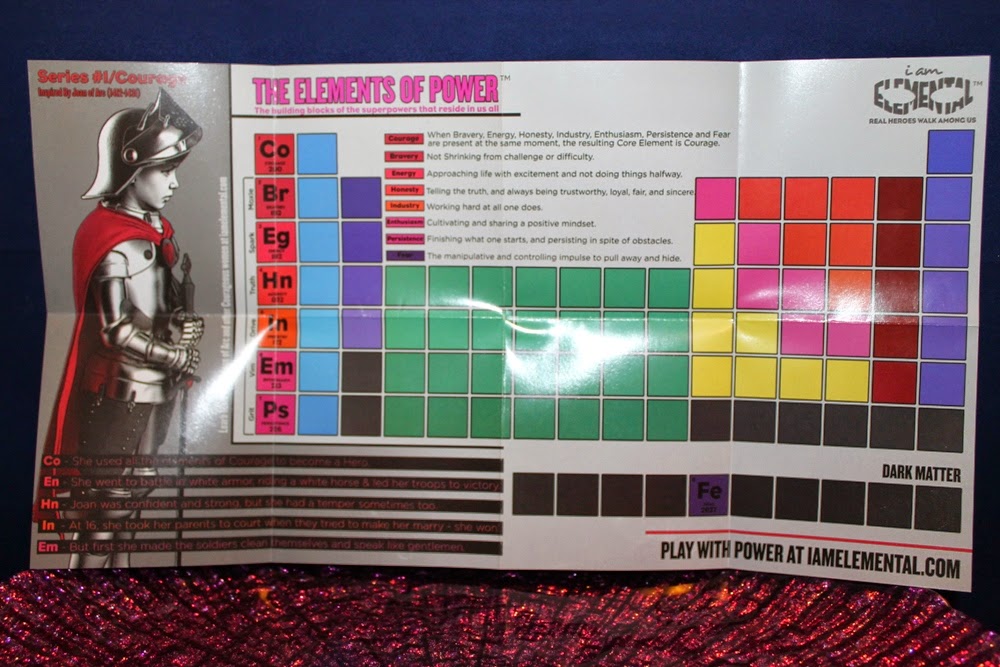 The Elements of Power is not from your high school chemistry class. I absolutely love the theme of this toy line. As mentioned, the first series is based off of the elements of courage and the inspiration is Joan of Arc. There are examples of her various elements of courage which gives a nice historical bonus to the toy line as well. Now let's observe the giant periodic table. There are a lot of blank boxes on this table! My mind just drifts and imagines what other kinds of figures will be released next. Also, in the bottom right corner is a section called Dark Matter. While there aren't any true villains in this line, the figures that could be released from a Dark Matter perspective have me totally interested. I am looking forward to what comes next for these figures. 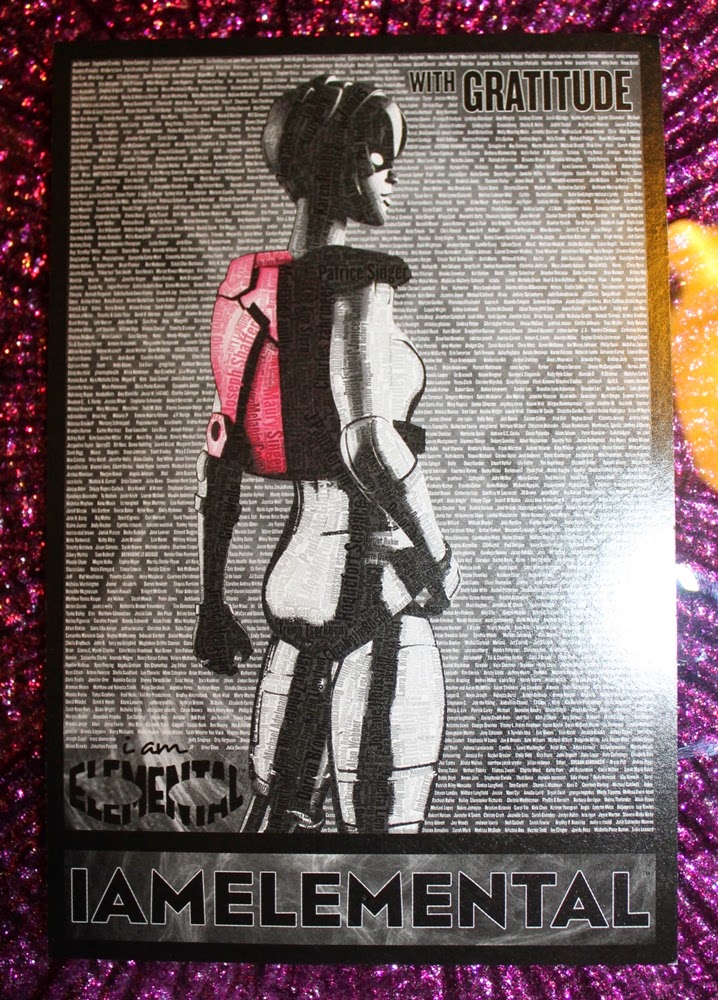 For pledging support to the campaign, supporters also received an index sized card with an image of one of the figures containing all the names of every person that backed the project on Kickstarter. I think that is simply the coolest thing ever. And much like Waldo, I am still searching for my name!

Here are some other photos of the figures themselves, enjoy! 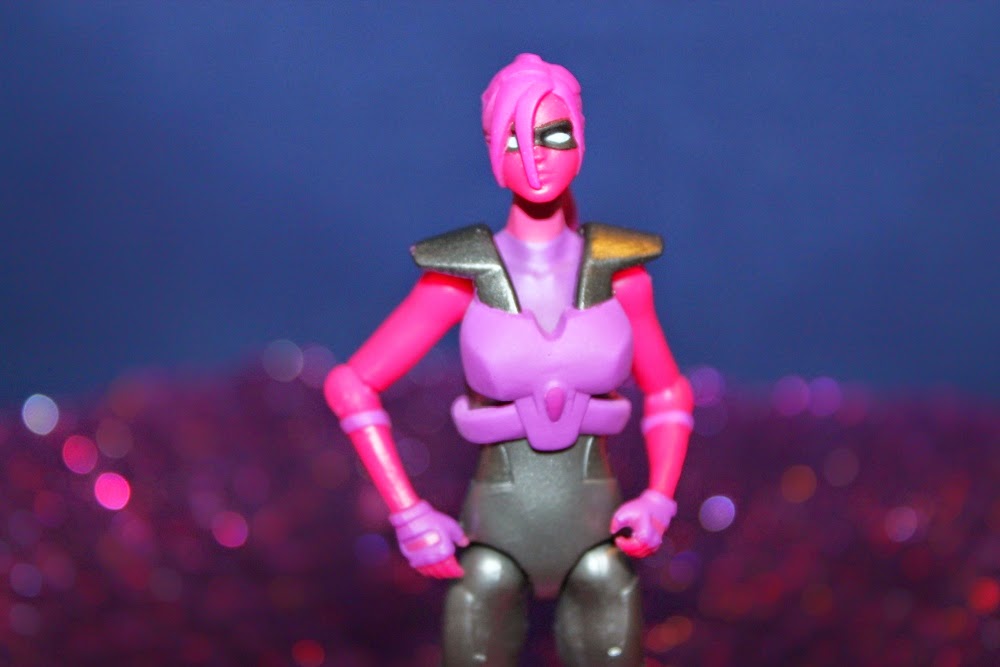 There was a design team used for these figures. I am not entirely sure the amount of work they put into this line, but Tim Conroy and his team at Eleventyplex are also part of this line. The work put into these simple four inch action figures is sharp and clean. I can't speak for every figure, but the ones I received all had tight joints. For the size of these figures they have nice articulation. The colors are bright and vibrant as I mentioned. The chest plates slide on and off easily enough for each figure. 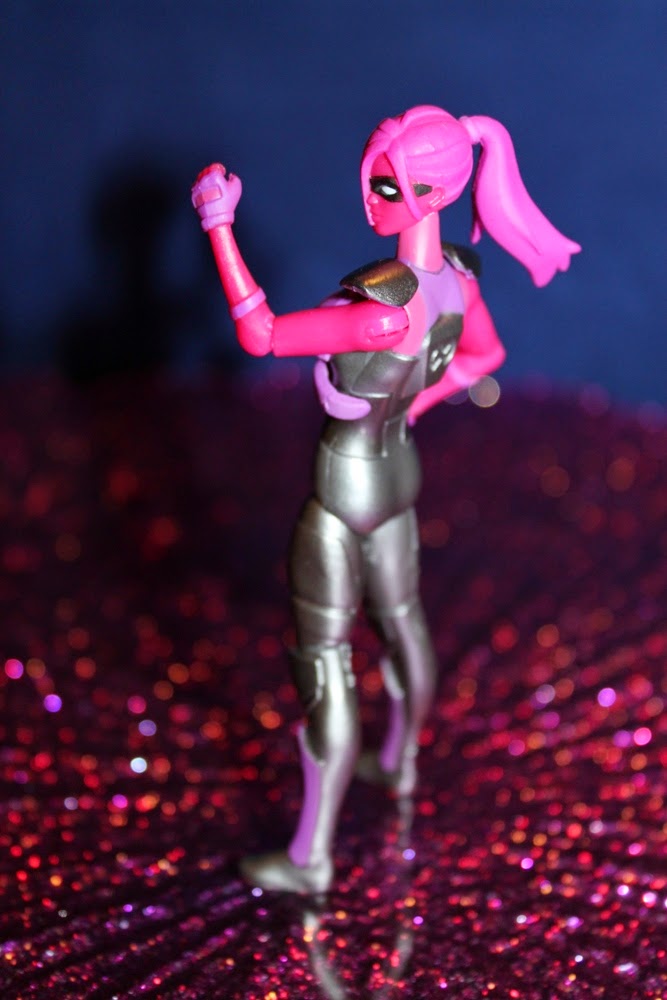 Enthusiasm's chest plate is open in the back to show off the design element for the figure. I also like her hair sculpt. It works and looks sleek. 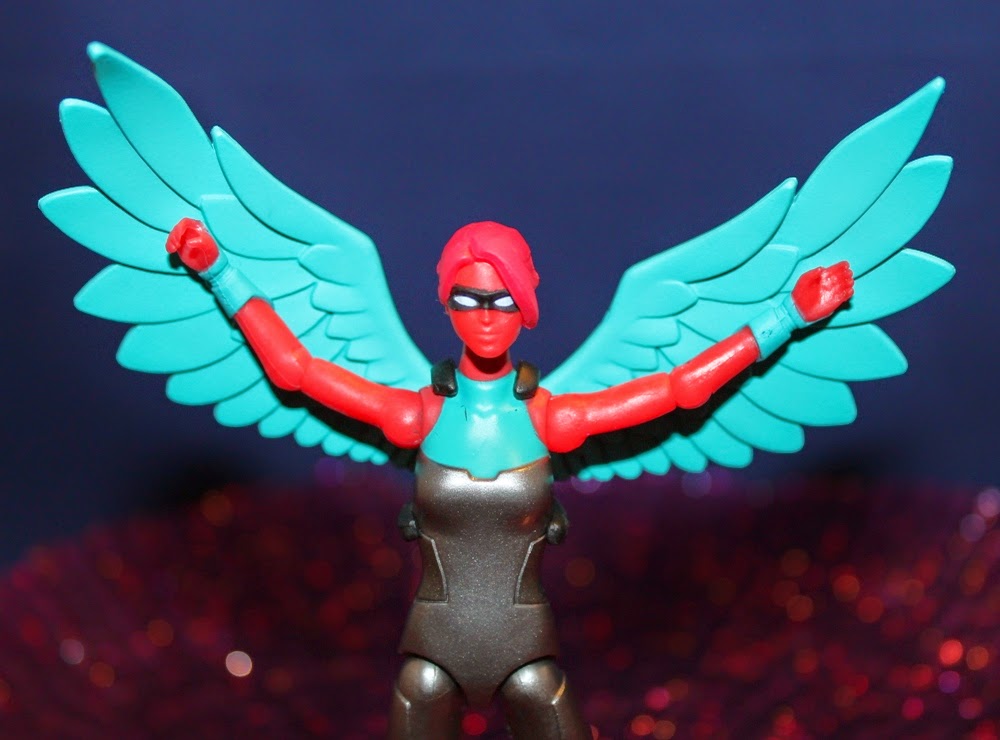 Here we have the glorious Honesty. The wings are sculpted in such a simple way but they seem so full of life. I also really enjoy the sculpt of the body. Everything looks proportionate. 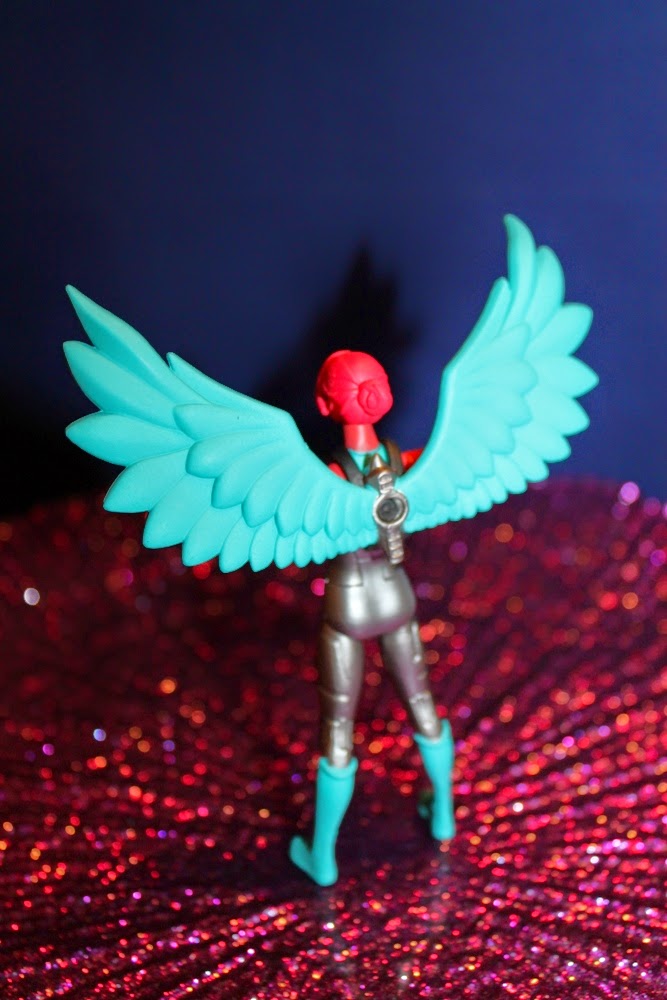 The chest plate is a reverse on Honesty as opposed to Enthusiasm. The wings snap on the back while the front is open. The teal is also bright and lovely. I really like the color combination on these figures. Color is something important to me with figures. They don't have to always pop, but sometimes bright colors just work. 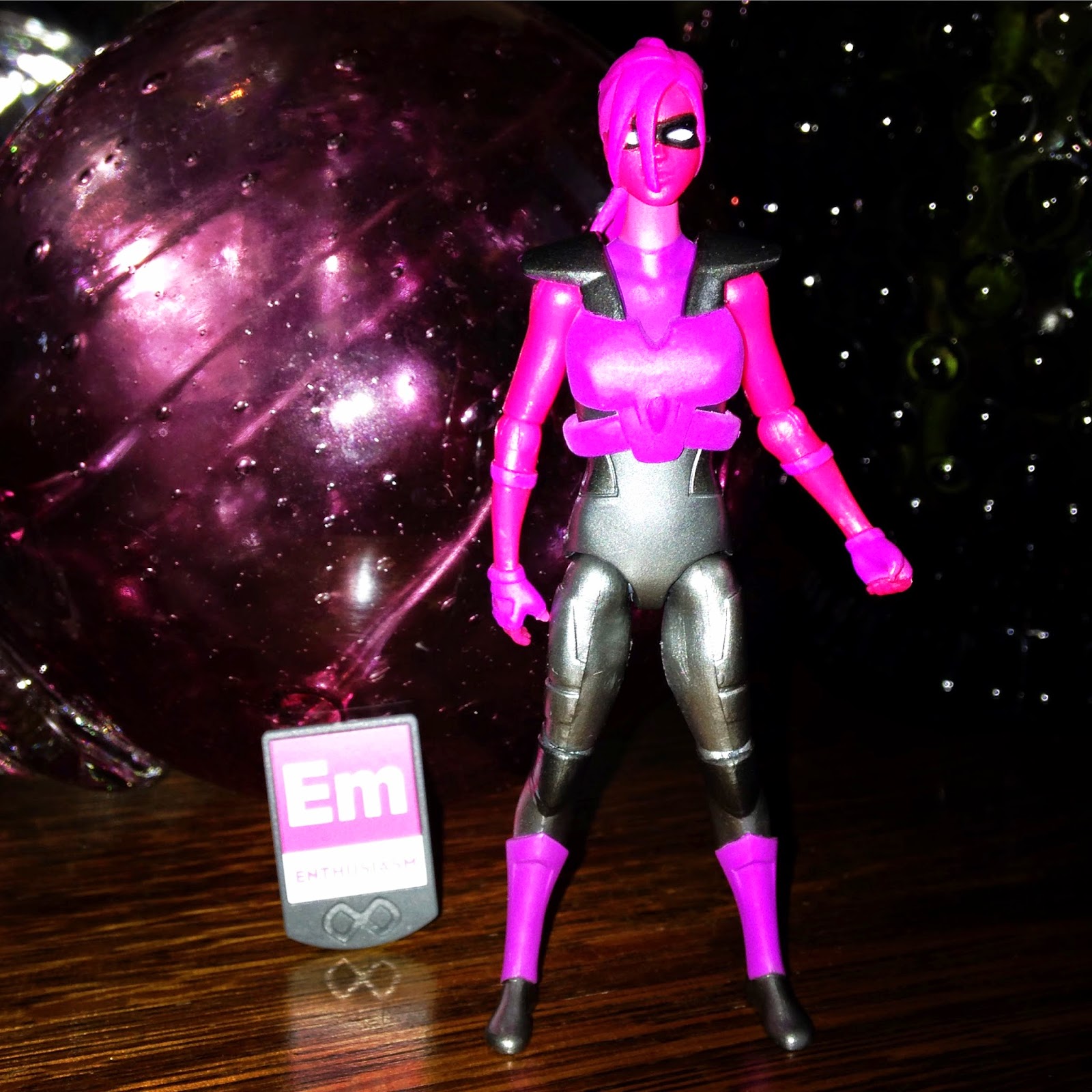 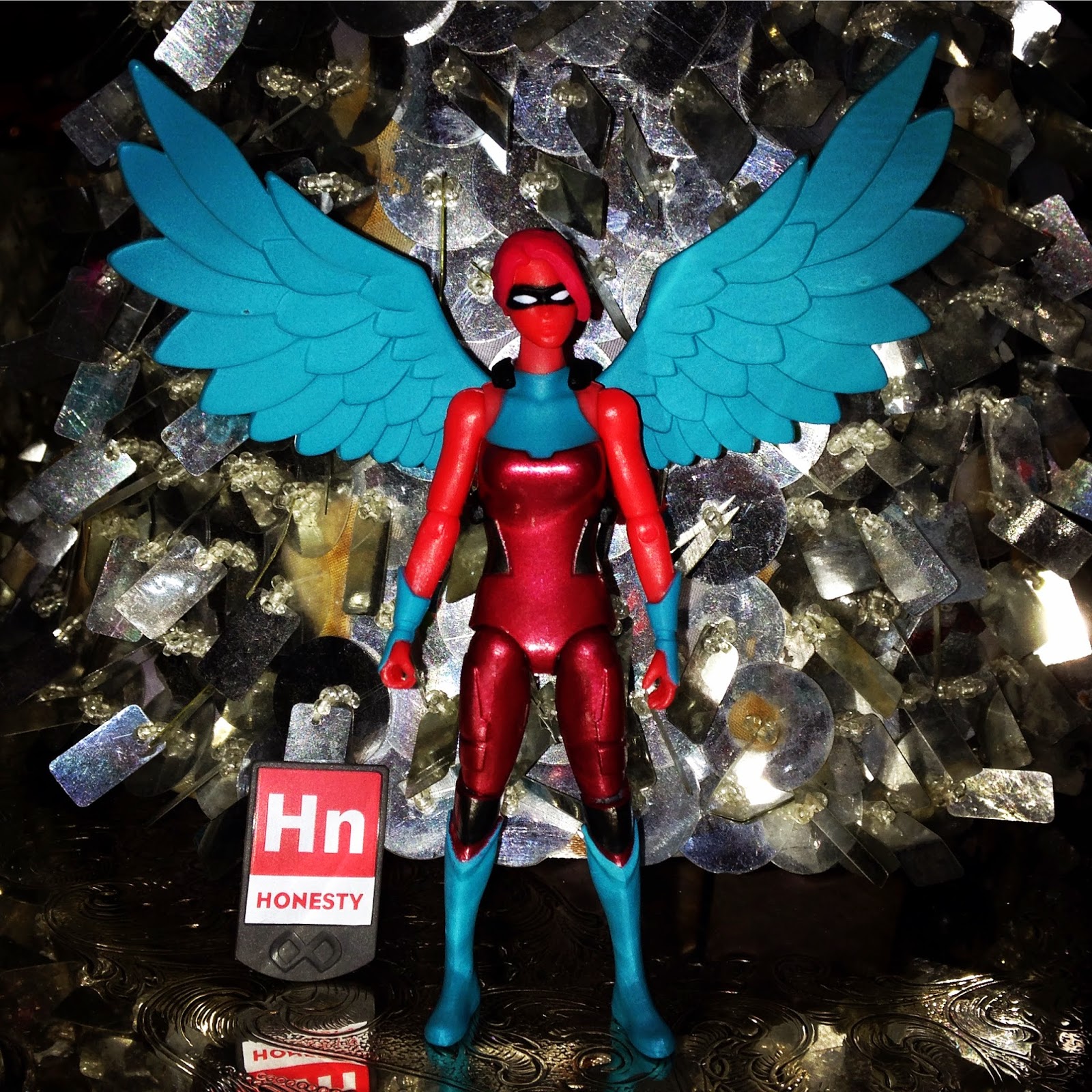 The tagline for this Instagram and Twitter photo was, "Honesty will always set you free." I hope to find more of these figures in my collection so that I can continue taking some fun photos. 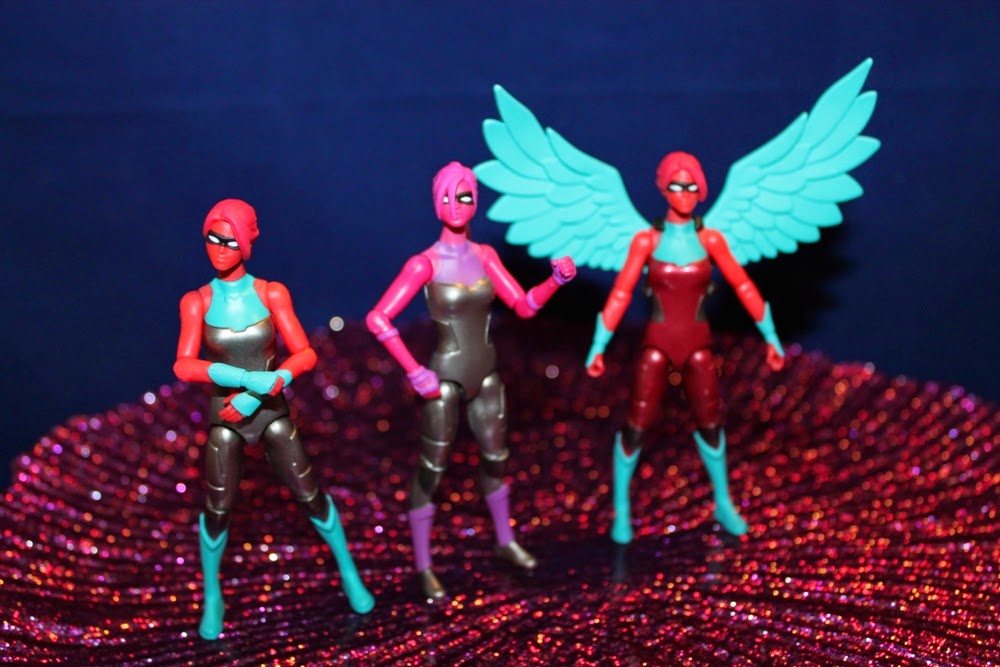 So is this line right for you? I think this line is a delightful female centered super hero line for kids and adult collectors. The message behind the line is empowering while the sculpt and detail on the figures is great for fans of action figures. My only gripes, if they could be called gripes, are that I want to see these in a larger scale. Maybe a six inch scale. That's just my own personal preference though. My other gripe is more like a hope. This line is not super available yet and I hope that it can be picked up in major stores like Toysrus and Target at some point. Items can of course be purchased at I Am Elemental, and a few other online toy and comic stores, like Big Bad Toy Store for example, so be sure to check out the I Am Elemental website to learn more about the items as well as updates.

Have you been playing with power yet? Let me know what you think of the I Am Elemental line. And be sure to keep it here! I have some fun things in store for Diary of a Dorkette! All My Toys will be going to space and beyond! Plus, the I Am Elemental figures will be showing up sooner rather than later on All My Toys as well. 2015 has just begun and things will only be getting better.