Bring it back: Zombies Ate My Neighbors!

Video games are a curious beast. Some people don't understand the appeal while others are more than happy to purchase the 8th re-release of Final Fantasy IV like it is nothing. Video games are a huge cultural phenomenon. They have created loveable and recognizable characters while also stirring up immense controversy. There are magazines devoted to the latest releases much like Vogue addresses the latest fashion shows. Video games have a way of bonding people together.

When I was little Atari was enjoying its final years and the world was waiting for the next big thing. Enter Nintendo. Everyone wanted this thing. My parents. My cousins. Me. There was so much curiosity about this Italian plumber calling himself Mario that really got everyone talking. Maybe it was because my family is Italian and there was this sense of pride for the soon to be mascot, I don't know. The only thing that mattered was that the system was on pre-order.

The plan was that we'd do the pre-order and get it in time for Christmas. My parents and I were all so excited. Christmas came and went with the pre-order lasting longer than anyone would have thought. Everything changed though once we saw the system in the stores. Why wait for the pre-order when we could just purchase one right there?

Having the Nintendo was such a strange experience. Super Mario Bros. was on the tv, and my parents and I were controlling the little plumber. We were experiencing something new and completely life changing. There were no strategy guides at the time, so we had no idea what the hell we were doing. Every night we'd all try to work together to get past World 1-1.

That was when things changed one night. My parents were getting pretty close to the end of 1-1 but I needed to get ready for bed, which was difficult because I desperately wanted to know what was going to happen. The next morning I woke up with so much anticipation, "What happened after I went to sleep? How far did you both get?" My mom was ecstatic, "Oh we went to a new part of the game where everything was blue. The music was different. I think we were inside a castle." They had made it to what we now know as the dungeon area of World 1.

Now things have changed so much. My parents would have no clue how to play a new video game today, and truth be told there are some games I'm not even sure I would know how to play. That is ok though, I tend to love the classics anyway. Like Zombies Ate My Neighbors. Released on the Super Nintendo in 1993, Zombies was one of the best games to play. There were a slew of levels and the player could choose between two teens with an arsenal of kooky weapons. With the choice of one or two player fun, the teen characters fought their way through zombies, werewolves, chainsaw maniacs, and other types of B-movie horror monsters. The goal was to try and save babies, cheerleaders, and other quirky neighbors that were just standing around waiting to be killed or eaten.

Oh and the levels had cute names, like "Weird Kids on the Block," "Mars Needs Cheerleaders," or "Dances with Werewolves." How cute is that? I love it! The game was just pure fun.

Here is the box cover: 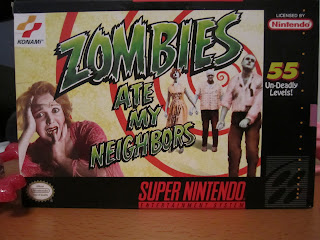 And here is the back of the box: 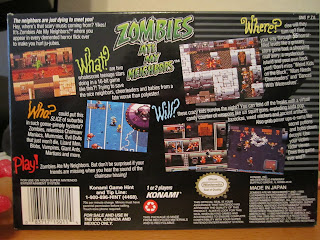 This game was so much fun. Doesn't it look like a ton of fun? The best part for me was the whole horror movie feel. I love horror movies. Good horror movies. Not some of the garbage that is made today. Let's go to the sidebar for a bit shall we? Has anyone seen or heard of The Human Centipede? I don't understand this world, there are so many wonderful stories to tell and yet someone thought it'd be a great idea to make a movie about some deranged surgeon that sews three people together, mouth to butt, so that they have to basically become one long digestive track. As in someone is gonna be eating someone else's fecal waste. Super grody.

Thanks to Beavis and Butthead I got to see a few clips from that movie and I had nightmares of flat out grodiness all night long. I was nauseated. What a horrible experience! I'm sure the makers of this movie were trying to use the concept as a metaphor to tackle the problems of over eating, but look folks, I'm catty. Not scatty. Give me a good scary movie, preferably with Gale Weathers in it, ok?

Anyways back to the topic at hand, Zombies Ate My Neighbors was simply the best. The sad thing is that this game has not seen a re-release or update at all. This is truly a disservice for those that have never even played the game. I understand that the game is available on the Wii's virtual console, but I don't own one of those. I'm not trying to throw my shoulder out playing video game tennis, thank you very much.

So I need Konami, or whoever owns the rights to Zombies now, to step it up and make some nice anniversary edition game. I miss playing this game and would love nothing more than to shoot some zombies with an uzi squirt gun. Like the back of the box says: Play! Zombies Ate My Neighbors. But don't be surprised if your friends are missing when you hear the sound of the chainsaw hissing!
Posted by Michael Lynn P. at 5:19 PM