The Misfits Are Gonna Get Ya!

Hello toy fans! I'm tired of driving. Holiday drivers are out in full force and ready to run their cars into anything to get to the next sale. I'm ready for Santa to arrive, pass out everyone's shit, and go. Either way let's talk about Jem and her enemies the Misfits, shall we? I bet Pizzazz never would have put up with anyone's crap on the road. She would have likely sped up in her Misfits Van and tried to drive folks off a bridge or something. All while singing a catchy tune to boot.

So as most of you know I have had my fingers crossed for a new Jem line. Sadly it doesn't look like Hasbro is going to release any new Jem product. The dvd cartoon series will probably be all we get. This travesty has propelled me to put together my very own custom Jem dolls. I'm tired of waiting.

While Hasbro continues sitting on their thumbs baking pies, Mattel has been releasing all sorts of Barbie product that has aided me in my quest to make really great Jem dolls. The Misfits have been a tad bit difficult though. Apparently no one wants to make a Barbie doll that could be the basis for Pizzazz, Roxy, Stormer, and Jetta. I have been looking and combing the streets high and low, and there is nothing.

Until very recently... Mattel has helped me out again and practically finished most of the work for me. I found a new doll from their line of Barbie Fashionistas that is going to be the perfect Jetta! In fact she could pretty much be Jetta as is, but I may add a few more bells and whistles to her. More is always more right? 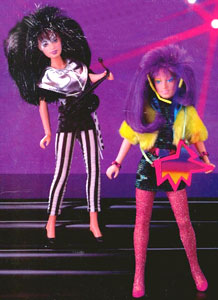 Jetta is to the left. She has jet black hair with strips of metallic fibers woven in. Her outfit was typical '80s rocker chic, tight pants and a true-to-form Dynasty top. Her instrument of choice was a saxophone. Clash is to the right, but who cares about her anyway? She was so annoying.

And now let's look at my new custom stand-in Jetta doll. (Technically she isn't much of a custom as I haven't added anything to her, but she is totally Jetta for the 21st Century.) 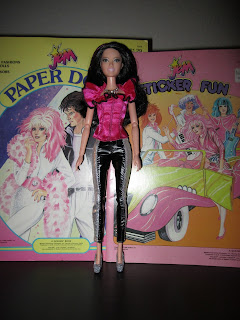 As you can see this Jetta has some skinny rocker pants and some super fun sparkly platforms. Her top is a bit Dynasty-ish, but the pink may not be exactly what '80s Jetta would have worn. This Barbie doll is also lacking the awesomely bad tacky face paint like the original. I have no clue how to paint on a Barbie doll's face. I'm afraid I would ruin everything. And that is the truth, caps on the lock.
﻿ ﻿ So there are some things I need to work on with her. She needs a bitchin' saxophone. Like something Lisa Simpson would play. I also need to find a way to really get her hair poofed up and ready to rock out with the other Misfits. That is once I can find suitable updates.

I think this doll can really make a great Jetta, which is very interesting. How funny is it that I am getting inspired to "create" Jem dolls from Mattel's Barbie brand? Hasbro, get with the program! Your competitors are helping me out! Hurry it up and make some damn new Jem dolls. What else is it going to take? A petition? I'm a soap fan, I know how to roll out a petition.

Anyways, good luck out there everyone. Be careful on the roads. Misfit drivers are out and ready to rumble. Ah the holidays.