Remember when I said I had a story about reading Fear Street books by R.L. Stine? Well today is a very luck day, because have I got a story for you! For those who aren't sure what I am talking about R.L. Stine was the go to author for young adult horror and suspense in the late '80s and much of the '90s. Needless to say I was a fan.

A fan in only the truest sense of the word. For the majority of my pre-teen and early teen years I had my nose in a book. I loved to read. I was like Belle from Disney's Beauty and the Beast. Except I wasn't as pretty as Belle. I was slightly over weight and my ass was so big it literally would rip the back pockets off of my jeans. Do you all see why I had my nose in a book? Who wants to be friends with the girl whose butt eats clothing? No one.

Reading was my one true place where I could escape from the horrors of my shredded jeans. The Fear Street books were exciting because I got to also read about teens in high school. The stories gave me room to imagine what I would be like in high school. I would invision myself walking the halls being popular or having a steady boyfriend. Reading the horrific happenings on Fear Street got me thinking about how I would want my own high school experience to be. Granted the whole fighting for your life from mysterious murder and mayhem may have been a bit much, but I still enjoyed reading what I could potentially look forward to in high school.

In fact one Fear Street novel I truly loved was The Best Friend. I remember waiting in the check out line in the grocery store and seeing this book by the register. I was totally drawn to the cover... 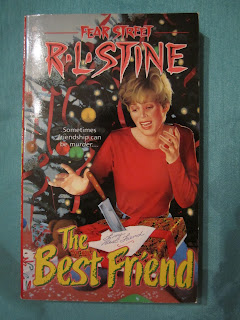 Who wouldn't be interested in reading a book where a girl is opening presents by the Christmas tree and there is this huge knife sticking out of the package? My goodness all Santa needed to do was leave a lump of coal! Stabbing a gift is a bit much for being naughty.

However a murderous Santa was not the premise of the book. By looking at the title and the caption: "Sometimes friendship can be murder..." we see that mean girls are for real. The back of the book explains that Becka Norwood (the girl on the cover) is essentially being stalked by Honey Perkins. Honey desperately wants to be best friends with Becka and is telling everyone that they are super close. However once Becka is like, "Back off bitch. You are cray-cray." Holly goes a little loco and all sorts of stuff starts to go down. 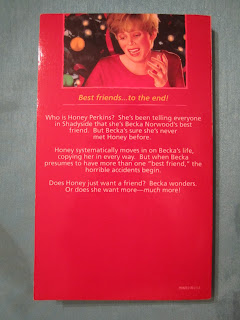 This book was fantastic. I remember reading the end and being completely shocked. There was a huge cliffhanger that left me speechless. Basically poor Becka gets framed for murdering her boyfriend, when it was really Holly. I remember cursing that crazy wretched Holly! A few years later there would be a sequel that I never read. I have no idea what became of poor Becka...

Anyways so I had pretty much every Fear Street book. My collection was just incredible. Of course it would stand to reason that when I was around 14 I had decided to sell my book collection. My theory was simple, I had worked hard to lose some weight. My ass was no longer eating the back pockets on my jeans. I wanted to try and make friends. And to be totally honest I needed to make some quick extra money for a new top at Gadzooks. (Remember that dump of a store?)

So after marking my name out in every single book with a marker I sold my precious collection of books for a few dollars. I essentially tried to mark a part of my life out. I was such a toolette. What was I thinking? Time went on and the Gadzooks top ended up getting donated to Good Will and I looked around my bookshelf wondering why I didn't have my nice collection anymore. I felt so stupid.

The next step in this whole sordid mess involved me going out on an adventure to hunt down my old books a couple years ago. The problem was that the store I sold the books to was long gone. In its place was a pop up church. My Fear Street books could not possibly be there. Either way I went to as many used book stores that I could find. I'd walk in and go through every Fear Street book looking for my marked out name. There was nothing but other people's names. I was feeling so lost.

Having kicked myself for being so dumb I traveled to one last book store. There was a tinge of familiarity about the name and the owner. However after visiting so many used book stores they were all melting into the same place. I also found myself highly overwhelemd with the book selection because there were so many Fear Street books to look through. The process started simple enough, I began opening each book looking for my marked out name.

As usual I was reading other people's names. As if I cared that The Stepsister belonged to someone named Amber. Whatever. I needed to see my marked out name! And then it happened. I opened a Fear Street book and saw my name under the aged ink of a Sharpie. Words could not express what I felt in that moment, though I will try. It was like being reunited with a long lost child I had given to some angry zombie ninjas. I had so much joy washing over my body. I couldn't believe I had found them!

I thumbed through more books and found a decent number of my old Fear Street novels! I naturally forked over my money to buy back the books I sold to the used bookstore that apparantly was in a new building. Who would've thought? It was magical. I even took myself to Dairy Queen for some soft serve ice cream as a way to celebrate. It was so exciting. I called everyone I knew with the good news. No one understood nor cared what I had to say. It didn't matter. I knew how remarkable it all was, because after more than 10 years I had found my books. I had no idea what those books had been through during those years, but they were back with me. All was well with the world.

What is even better is that now every 6 months or so the store owner will open up more boxes to replinish the shelves, which leads me to finding more and more of the books I sold. Is it sad that I am rebuying all of my books? Keep this in mind as an important lesson people. Never ever sell your crap for a few bucks to buy a cute top that won't last but two seasons. You will regret it!
Posted by Michael Lynn P. at 10:50 PM