Yo! Are you ready to dance with Barbie to a jammin' beat? I thought so! Call up Marky Mark and let's take a look at this week's Toy Chest Tuesday: Rappin' Rockin' Barbie! 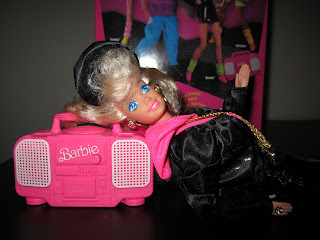 Sup?
So I love Barbie. Who doesn't? She has been involved in more careers and trends than Erica Kane. Growing up I had some really great Barbie dolls, but it wasn't until the '90s when Mattel decided to really run the gamut on just how much Barbie was willing to work for her money. Enter Rappin' Rockin' Barbie. Made in 1991 this was the big chance for Barbie to roll out her street cred and be all hip hop with a touch of rock. White kids everywhere were frothing at the mouth. I was one of those white kids.

I wanted nothing more than to have my very own Rappin' Rockin' Barbie. She seemed so cool and edgy. I never had one, because I was getting up there in age. At the prunish old age bracket of 9-10 my parents were growing concerned with my collecting habits, and they did their best to deter me from toy aisles everywhere. Their plans fell into place. Sadly no amount of bribing or blackmail would work. They were simply doing this with my best interests in mind. However my best interests was to see what mad beats Barbie could throw down from her hot pink boom box.

Many moons later I would eventually get my own Rappin' Rockin' Barbie and she was worth the wait! So let's look and see what kinds of coolness we are dealing with. 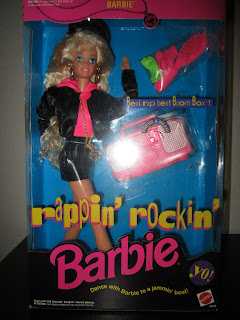 Rappin' Rockin' Barbie came with a hot pink boom box that played the same repetitive beat. She also came with hot pink sneakers, neon green socks, and a hot pink brush. Her outfit consisted of a black miniskirt, hot pink hoodie shirt with a black jacket. Crimped '90s hair was rooted deep in her skull and she had a cool black hat with awesomely bad golden jewelry. 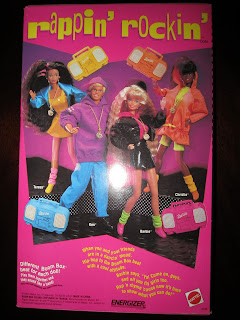 The back of the box shows Barbie and all her rappin' cool friends. From left to right we have Teresa, Ken (totally giving Marky Mark a run for his money), Barbie, and Christie. Each doll came with their own colorful boom box with a unique beat for each character. They all look so tacky! Everyone should go out and get one or two immediately!
Message from the back of the box:
"When you and your friends
are in a dancin' mood,
Hip-hop to the Boom Box beat
with a cool attitude.
Barbie says, "Yo! Come on, guys,
and all you fly girls too.
Rap 'n rhyme 'cause now it's time
to show what you can do!"
A mess! I don't think Jay-Z and Kanye are going to be asking Barbie for a record deal anytime soon. But since Nicki Minaj is getting the royal Barbie doll treatment maybe Nicki and Barbie could do a little interesting duet together? I would just die of nerdiac arrest.
Let's look at some fun photos: 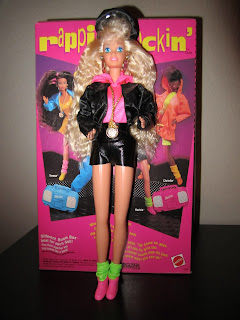 Here is Barbie with her whole outfit. What were we thinking? How fun is this outfit though? In some fashion circles Barbie's clothes are actually on point right now. Everything old is new again right? 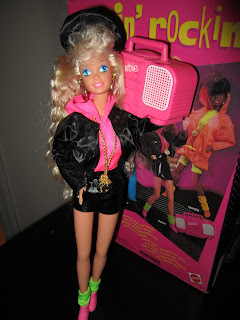 Barbie is takin' it back old school. She just needs to be careful, many people had too many accidents holding up big bulky boom boxes. 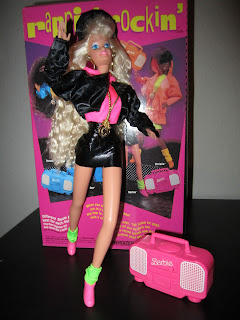 She can even bust a move too! Before we had video game systems teaching us how to dance, we had Barbie and her boom box beats!
Well folks that is about it for today's Toy Chest! I hope you all enjoyed it and keep it back here! I really will make good on all those fun posts I have coming up!