Hello readers! Since Halloween is slowly approaching I thought it would be neat to look at some scary books! I love to read books. Nothing is more exciting than a good book, except maybe a cool toy. Anyways when I was younger I loved to read scary murder/mystery thrillers. Back in the '90s my favorite series of books were the Fear Street novels by R.L. Stine and pretty much anything by Christopher Pike. The books were gory and tackled all kinds of sci-fi elements. They fed my imagination and for a brief time I practically lived in the mall bookstore doing my best to decide which one I would buy next.

Of course there is more to the saga of these books than meets the eye, but that will have to wait for another post. Instead let's look at some thrillers in time for Halloween! The Fear Street series was named after a street in a fictional town called Shadyside somewhere on the East coast. Each book told the story of one or more of the town's teens involved in some form of murder and mayhem. Personally I would move if a town had that much drama, but whatever.

One of the cool things about the books was always the cover. They had fun scary covers to entice people like me into buying whatever I could. Hey, at least I was reading right? That has got to stand for something.

Here is the first book we will look at, Halloween Party: 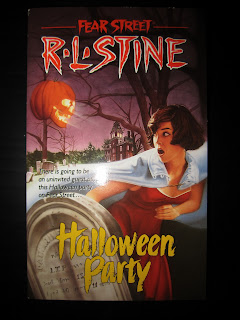 I remember wanting to read this book so bad. Who wouldn't want to read a book where someone is running through a graveyard with a floating pumpkin head getting ready to do something wicked? I love it! The caption on the cover reads "There is going to be an uninvited guest at this Halloween party on Fear Street." I really wanted the uninvited guest to be a floating skull faced killer pumpkin head, but it wasn't. The premise was that sweet Terry and darling Niki get invited to a Halloween party, thrown by the new girl in town. The party is of course at a creepy old mansion (all the good stuff always takes place at a creepy old mansion) and the party turns into a scavenger hunt. It's all fun and games until someone ends up with a knife in their back, and not in some metaphorical highschool friends betraying friends kinda way. The teen really ends up with a knife in his back. Panic and terror ensue and the teens end up having to solve the mystery and stay alive. The plot really got cookin once a fire broke out in the mansion.
This story had me so caught up that I basically sat in class pretending to do my work, all the while completely reading this book. That was the problem with Fear Street books, you couldn't put them down! I was consumed with reading all the time. I'd secretly stay up really late at night with a lamp on reading. I'd go out to dinner with my family and I'd just read, pausing to take bites. Listen folks, it didn't get much dorkier than me in the '90s ok? 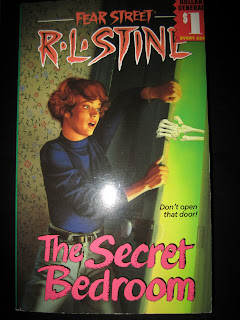 The next book cover we are going to look at is The Secret Bedroom. First of all the caption just says it all, "Don't open the door!" Well Lea didn't get the memo, because now she is struggling with a skeleton's arm and some weird green light. The selling point with this book was that Lea (the girl on the cover in case you were wondering) and her family move into a creepy old mansion on Fear Street. Like most creepy mansions, Lea's new home has a locked secret room in the attic. Apparently a murder went down in the room a hundred years before Lea moved in. With all that bad energy, Lea finds herself tempted to open the door. Does she? I'm not saying, but this book was good! (Hint: ghost possession!)
This book was really fun. My heart also skipped a beat during the process of reading this story in the 6th grade, because this really cute mysterious new guy in my class also read Fear Street books. He had commented on my holding The Secret Bedroom and I just about died. This knowledge was like, "OMG! The mystery boy reads Fear Street! We have got to be soul mates!" Because at that time, no one was bursting with honesty and excitement about reading Fear Street. It was like admitting you cooked drugs in your kitchen. People don't readily share that information with just anyone. However I had no shame, or friends, so I was thrilled when the mystery guy talked to me about Fear Street. We only had about two or three Fear Street conversations and then he fell in with the cool crowd and I was back to stickin my nose in the next Fear Street story. Good times. 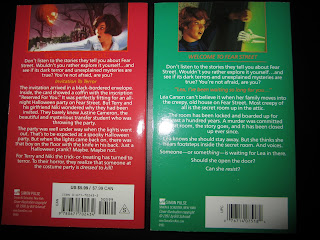 Here are the backs of the two books, briefly teasing what they are about. Fear Street books were a big deal, they even made the national media news circuits for their depiction of horror and violence. There were some boring parent groups that were livid and firmly believed that Fear Street books were polluting their children's minds in their local school libraries and book stores. It was so funny because my mom and I had watched a news story on the evils of Fear Street books and she was like, "You don't read those books do you?"
My response had been, "Oh no, not at all." As my attention went right back to reading a Fear Street book. Eventually my parents realized I was reading these horrific books, but they didn't care. At the end of the day they were glad their child liked to read, which is what it should be about in the end right? True some of my smarter and cooler peers might have been reading the great literary classics of olden times, but my heart is going to always have a soft spot for the spooky tales on Fear Street.
Posted by Michael Lynn P. at 11:34 AM