Alright I have fantastic news for you all. I have it on high authority that Jem is coming back. And by high authority I mean Wikipedia. Rumor has it that Hasbro is planning on showing some new Jem dolls and I am assuming a new cartoon. None if this has been validated, but what we do know is that Hasbro will have a booth at the upcoming New York Comic Convention this month. They released a statement detailing that they will be showing new product and Jem and the Holograms was included as new product.

So what does this mean? It means that I am reliving the past and may actually have the chance to own some new Jem stuff. Back when the original dolls were out, I never really wanted any. I loved the cartoon, but the actual dolls were rather odd. As an adult I am kicking myself for never owning any, but when I was little all I could think was, "The Jem dolls are much bigger than my Barbie dolls, so how on Earth will they fit into the same imaginary world?" It just didn't work.

Now around last May when the Hub started airing old Jem episodes I got the idea to make my own custom Jem dolls. I got tired of waiting for Hasbro to make a move with new stuff. I just had to have a Jem doll, like ASAP. I will be first in line to get any new Jem stuff, however I am rather pleased with my custom Jem dolls. I will share some of the ones I have put together with you all! It is your lucky day!

First up is Jem: 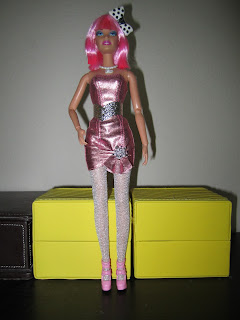 As you can see, this is more like an updated 2011 type Jem doll. She still has a shiny metallic pink dress, but it is strapless. She has a shorter pink hair-do and some sparkly tights. All she needs is a sound stage. Or a rockin roadster. 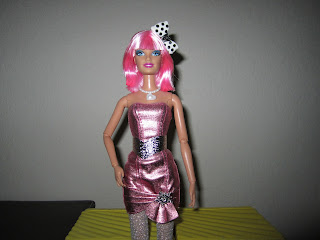 Here is a closer photo. I did not bother painting the crazy face make-up stuff like the old Jem either. I mean what is the point? I have no idea how to paint a doll's face and I am certainly not going to start now. And for those of you who are wondering, this Jem doll is courtesy of Barbie. I used a Swappin Style Barbie doll and a Swappin Style (SS) head. This line of Barbie dolls from Mattel are amazing because you can create all kinds of new characters. Let's just not say anything to Mattel about using their Barbie dolls to make my own special Hasbro Jem dolls, ok? I do not want to start a toy civil war. Most of the clothing is new, except for the silver belt and tights, those are vintage Barbie clothes (from a 1985 astronaut Barbie.)
Now we shall move on to Kimber! 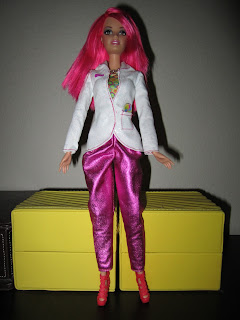 Here we have Kimber, good 'ol messy Kimber. Kimber was made courtesy of the SS barbie dolls. Her pink hair is spot on for Kimber. I tried to find some blue pants, but instead this newly updated Kimber has a pink pair. The pants are actually vintage and come from the astronaut Barbie mentioned earlier. I love how in the '80s Mattel made an astronaut Barbie doll with a pink and silver color scheme (Barbie was highly fashionable in space.) The white tuxedo jacket and shoes are new Barbie clothes. I am actually thrilled, the jacket came from a new doctor Barbie, and it was perfect for Kimber's jacket! 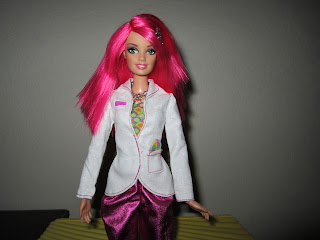 The only thing this Kimber needs is two men fighting over. And a keyboard.
Next up is the lovely Shana﻿: 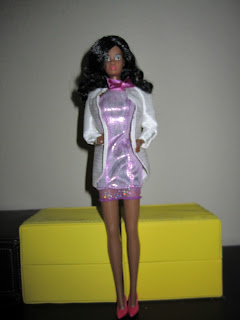 Now I know what you are thinking, isn't Shana supposed to have a light purple hair color? She is, however I had a very hard time finding an African American Barbie doll with purple hair. I know there are a few, but for now Shana is just going to have a normal hair color. This was not a SS Barbie, but the actual '80s Astronaut Barbie doll! She is sporting a nice purple dress though and oversized '80s style jacket. I think she embodies Shana rather well, even though the hair isn't right. 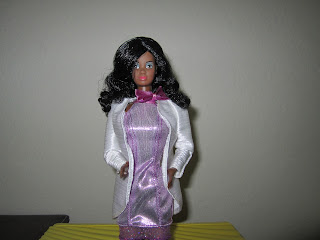 Her hair color may be wrong, but look at her electric blue eye shadow! That is totally something that Shana would have worn on the show. In fact I think she did. The dress and shoes are new, but the jacket was a reproduction from a vintage Barbie doll. I love reproductions.
The final custom I have is Raya: 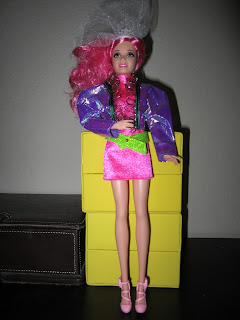 Ok I will admit, out of all the custom Jem dolls I made, Raya is the biggest mess. Her pink hair is perfect, but this doll was a part of some Barbie butterfly show, so the mold has a much smaller frame than a regular Barbie doll. All the clothes I tried to put on her were way too big. This outfit was the only one I could find that fit decently and looked like a fun tacky '80s Jem get up. I also tried to make her veil into an interesting Gaga-esque hat. I just hope she doesn't look like a hooker extra from Pretty Woman. That was not my goal. 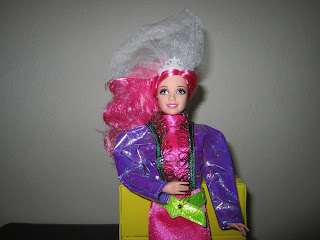 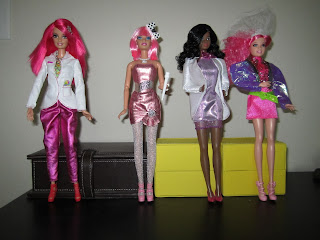 Finally here is a picture of the set. I know I am missing Aja, but I have had the toughest time finding a teal haired doll. I have not given up my search though and will find one! I mean these Holograms are missing their bandmate! Aja just has to join them!
I have also been thinking of how to customize some Misfit dolls. I think that would be so cool. I mean everyone needs a custom Pizzazz doll. She hates hippies and Jem. What more could you ask for?
So until next time folks! I hope you liked the custom Jem dolls, and if you want more information about any of these dolls or any tips on customizing Barbie dolls, just ask!
Also, be sure to check back, because I will be addressing the new Jem stuff once there is any news from Hasbro!
Posted by Michael Lynn P. at 2:32 PM