Hello toy fans! Are you ready for a spooky Toy Chest Tuesday? Since Halloween is next Monday, I thought this Toy Chest Tuesday could look at a fun Halloween themed toy. In the late '80s and '90s Playmate's Teenage Mutant Ninja Turtles (TMNT) toyline was one of the most popular toylines ever. There were so many characters and variants of characters that any TNMT fan at that time was basically living in heaven for a good long while. And by heaven I mean a dirty sewer with talking turtles that eat pizza. A lot.

This toy we are looking at is a Bride of Frankenstein April O'Neil from the Universal Studios Monsters series of TNMT toys. This series saw the TMNT as various characters from the old Universal Studio Monster Movies.  Let's look closer! 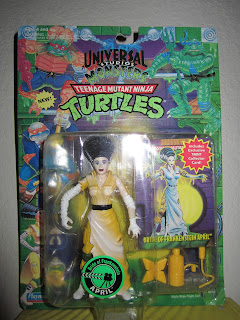 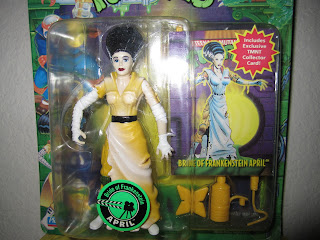 Here is a closer picture of Bride of Frankenstein April. The interesting thing about this toyline was that this variant was just one of many April O'Neil variants. I never had this version of April growing up, but whenever I was able to find a new variant of April in stores, I usually found a way to snatch one up. Each variant of April got more and more kookier. It was nice though of a toyline to actually make that many variants of a female character. Usually female toys in mostly male toylines usually got one version only. Maybe there will be a future post dedicated to chronicling the various incarnations of April O'Neil. (It will be soo much fun!) 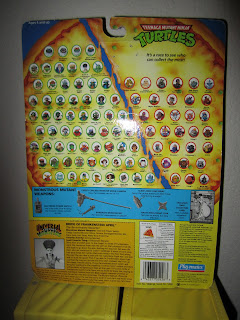 Here is the back of the toy card. One of the best things about the TMNT toyline was the Turtle's addiction to pizza. Pizza was always a part of the toyline and always made me hungry for a slice. How could pizza eating turtles not make you hungry for pizza? I feel like calling Dominoes right now. As you can also see, there were tons of characters to collect. Below the pictures of characters is a list of April's weapons and a little bio card about this version of April. 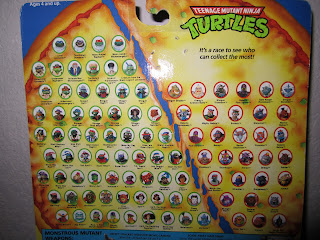 Here is a bigger picture of most of the characters that were available around the time that Bride of Frankenstein April came out. There were so many! I basically owned the April variants, but I do wonder if anyone ever did their best to own the whole line. I am sure there are some people out there. Most of the April variants are on this card, as well as Krang. Krang was an evil pink brain. I loved him. I don't know why I ever wanted an evil grody pink brain for a toy, but I did. He was, is, will forever be, awesome. 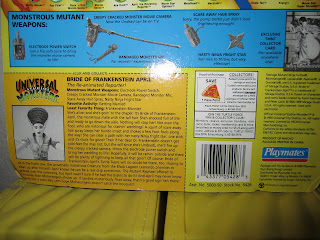 The kooky versions of April also came with the most campy type of weapons. This April came with:
Electrode Power Switch- Just a flip jolts juice to bring the monster movie camera to life!
Creepy Cracked Monster Movie Camera- Now the undead can be on T.V.
Bandaged Monster Mic- For recordin' experiments or ghouls!
Scare Away Hair Spray- Sorry, the pump bottle just didn't look frightening enough!
Nasty Ninja Fright Star- Not nice to throw, but very effective
I love that she came with hair spray. Especially hair spray that scares away, I'm guessing, Shredder and the Foot Soldiers. What a mess, but trust me, there are even messier versions of this reporter. (I'm looking at you Ravishing Reporter April!)
The bio card is also a mess, in the best way possible. Bride of Frankenstein April is "The Re-animated Reporter!" Her favorite activity is getting married. And her least favorite thing is the Frankenstein Monster. She is just kooky. What is even a bigger fun mess is the rest of the bio card. I am way too lazy to type the entire thing out, but you have to read it over. In it we find exactly what April will do with her creepy weapons as well as what her Turtle friends will be doing during the wedding. Hint: Invisible Man Michelangelo might catch the bouquet. A truly frightening scenario indeed!
Posted by Michael Lynn P. at 10:03 PM