Hello toy fans, and fans of alien life forms! I have a total blast from the past for today's Toy Chest! It will just be out of this world. We all remember ALF. How could anyone not? The real dorkette test is this: do you recall the ALF animated series? Double points if you can actively recall the very short lived toy line that went with said animated series.

So let's take a walk down memory lane, shall we? Coleco made some really cool pvc figures from the ALF cartoon and each character came with a mini vehicle. Today we are looking at Rhonda. Gordon (ALF's real name) was quite smitten with his pink mohawked girlfriend. Let's check out the pictures! 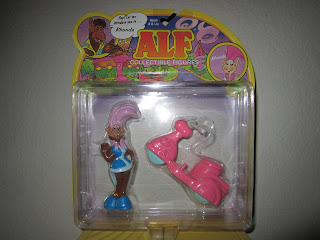 As you can see, Rhonda really has a pink mohawk. I feel like Lady Gaga or Nicki Minaj took hair and outfit lessons from super cool Rhonda. She even comes with a bright pink scooter type thing, called a Runabout. It is nice to know that if I lived on an alien world I too would have the chance to zoom around on a pink scooter. 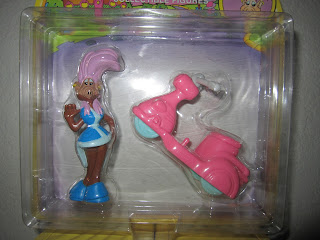 Here is a larger picture of Rhonda and her Runabout. She looks like so much fun. I don't actively recall any specific storylines from the ALF cartoon, there are just bits and pieces. I mainly just remember the toys. Of course I had a Rhonda and one more character (Curtis.) I remember thinking these had to be the coolest toys, because they came with vehicles! Toys are infinitely better with vehicles. Wonder Woman is probably the coolest. When I was younger I would pose her in a sitting position while flying her through the air, pretending she was in her invisible jet. She had like the cheapest toy vehicle ever, it was literally free. My parents loved this by the way. Anyways, I digress. 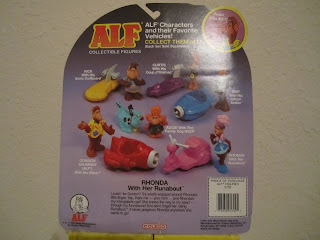 This is the back of the package. Coleco actually made a decent number of pvc toys to the cartoon. There was, of course, Gordon with his Warp 1. Augie with family dog Neep, I do remember the dog. Skip with Jetcan Sedan, what a cute name! Curtis and his Coup d'Melmac. I actually had a Curtis as well as Rhonda. Both of them are actually melting in an attic as we speak, but thanks to Ebay I have been reunited with a new Rhonda at least. Then there is Rick with his Sonic Surfboard. I envision him surfing in space. I don't know how that would be possible, but maybe aliens just know how to space surf? I could see it being a big thing hundreds of years from now. Of course there is Rhonda and her Runabout. Let's learn more about Rhonda! 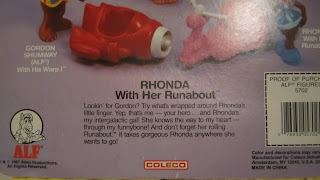 Here is the scoop on Rhonda- Lookin' for Gordon? Try what's wrapped around Rhonda's little finger. Yep, that's me- your hero... and Rhonda's my intergalactic gal! She knows the way to my heart- through my funnybone! And don't forget her rolling Runabout. It takes gorgeous Rhonda anywhere she wants to go!
Gordon really sounds like a nice boyfriend. I mean I don't know many alien life forms that are happily ready to admit they are wrapped around their girlfriend's finger. Talk about how to really man up. I think a lot of Earth guys could take a lesson from Gordon. I also like how the way to Gordon's heart is through his funnybone. The way to an Earth guy's heart is through his stomach, with food, which is difficult for an Earth girl like me. I don't cook (unless frozen pizzas count as cooking), but I think I am damn funny. If I wasn't already married, maybe I would've ended up with an alien life form. See that is what funny girls need to do. Stop waiting for some knight in shining armor to show up with his rescue stunts. He will probably just expect home cooked meals in some stuffy castle. Instead find an ALF.
I love this toy. I am also thankful for Ebay, because without that addictive shopping website I would have never been reunited with Rhonda, and possibly other ALF toys! (A girl can only comb through her attic so much, before it becomes life threatening.) So cheers to Ebay and the sellers who are willing to part (cheaply!) with their junk! The 21st century is truly amazing. We may not have space surfing yet, but it is a pretty darn good century at the end of the day.
That is it for this week's Toy Chest Tuesday! Enjoy the pictures! Also feel free to leave comments with any ideas or requests for future Toy Chest Tuesdays! I have many possibilities, so you never know what could show up.
Also get ready. Miss M will be doing a book club soon. Mostly old fun books that no one will probably care to remember, but it will be awesome!
Posted by Michael Lynn P. at 9:56 PM