Vampires are an interesting group. When I was a grunge goddess teen I actually had a crush on a guy who briefly believed he was a vampire. He would point to a star and say that was his original home world. He thought my legs were delectable. The whole thing was exciting and moody, like a dark gothic romance novel. That is until he coughed up blood and wanted to give it to me. (I bet Elizabeth Taylor never had to deal with that.) Needless to say things did not work out. At. All. Quirky romance is cute and all until it turns into an episode of CSI.

Why is it that vampire stories insist on being connected to some morose depressing love story? I completely get the draw with the first bite. Titillating as that may be, I do find myself growing restless. These tales always involve some vampire guy who either wants to bed a human or eat everything in sight. Binge eating vampires are boring (I wanted to like the new Fright Night, honest) and I am quickly losing interest in sparkly guy, sad girl, and the freaky hybrid baby.

Enough of this mess, and the solution is not a change to all things zombie or all things ghosts. I think we can all appreciate creepy monster stories and do not have to rely on the whole, "Zombies are in right now. No wait, now it is killing cyborgs." I want to see it all, but please make it good. I love my vampires, zombies, ghosts, crazed robots, all of it. I even like a good silent story. (I don't think my local theater will ever be showing The Artist. Sigh squared.)

A solution to all this nonsense is for more people to look into the classics. The Last Vampire was written by Christopher Pike and it was a 6 part series that chronicled the life of Sita/Alisa the last vampire on Earth. Of course there have been recent added editions to the series, but I have yet to read them. The first 6 came out in the early nineties and I ate them up.

This series was so exciting because the main character was a 5,000 year old ass kicking female vampire that was always trying to solve a mystery. She'd thirst for revenge. Also there was always someone, or something, wanting her dead. Being the last vampire and all, that never really sat well with her. So through six books Sita made friends, experienced love(s), faced all kinds of enemies, came to terms with having an evil child, became a human and then vampire again, this is all just a brief skim over the surface folks. I loved these books so much, there was so much action, suspense, and even some romance. More importantly the story involved a strong multi-faceted female, something that I think there should be more of in this world.

Of course the ending of the 6th book was a total shock. One of Sita's friends throughout the series was a nerdy guy named Seymour. He was always helping Sita gather information that she needed for her missions. He was also HIV positive and dying. In a touching moment Sita gave some of her blood to cure him (this occured in a previous book.) Seymour was going to live, which was rare in this series because most everyone died. By the end of the final book though everything was turned upside down.

The whole series wasn't real. Sita was merely a made up character by Seymour. He was writing his latest, and possibly last, story while trying to live with HIV. It was a beautiful story and I was completely overcome with emotion. For six books I had been reading about this heroine who was not real! I was also made aware of certain realities of life. At that time I had never read a thing about HIV. Look, I was a clueless pre-teen living in the suburbs. Whatever I knew was from the news, and the news had done everything to scare and stereotype the issue at that time. This story was so amazing because it got me to work on not being as clueless about life around me; to realize that there was a much bigger and more complicated world out there than just my little slice of suburbia. Here's the thing, that clueless pre-teen suburban girl would eventually grow up and as a young woman become friends with a guy that would end up contracting HIV. And I like to think that I was able to be a source of support for him instead of being scared and judgmental. Not what one would expect from a scary vampire thriller huh?

To top everything off, word on the street is that there is a movie in the works. Now this is something I could really rally around! I would love nothing more than for this series to be turned into a really awesome movie. Of course with the ending of the 6th book, I have no clue how the 7th and 8th novel tie into the whole series. Either way I will be looking forward to any news, because I think it is about time that this series got its chance to shine in the spotlight.

Here are some pictures from some of the books in the series! 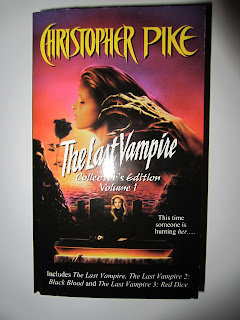 Front of a collection of the first three books 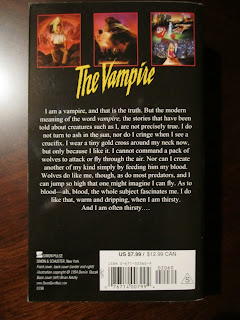 Back of the book 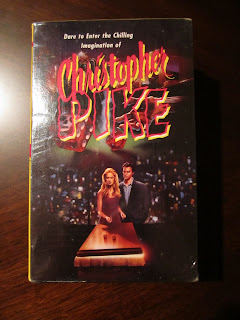 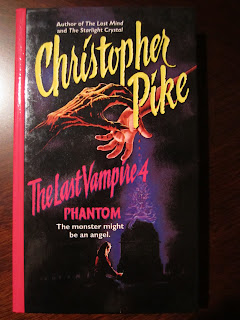 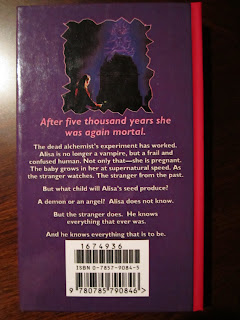 Back of the 4th book
These books are still out now, though they currently have very different covers. If anyone out there likes a good vampire story and has yet to read these, give them a shot! Granted you now know how they end, but don't let that stop you! The ending didn't stop Christopher Pike, he went ahead and made two new ones.

I also have a fun new announcement! Diary of a Dorkette is on Twitter! I'm tweeting like that yellow bird from Loony Tunes. This is gonna be a hot damn mess! Follow me @DorketteTweets. The world is just not going to be ready for this. (More like I am not going to be ready for this since I am so ass backwards with technology.) Anyways, until next time!
Posted by Michael Lynn P. at 12:10 AM