So here is the thing, as of this writing I am close to being caught up on the final episodes of One Life to Live, and I have to say the show is on fire. Spoiler alert: no one will be visiting Eterna, but there are a few that will be visiting heaven. I am just at a loss for words, the show is out of control. Prisoners are running around with guns. Todd is looking damn good and the show's main character might actually die.

Enough of all that though, I thought now would be a great time to sit back and ponder the important things... Like is Wonder Woman trashy or timeless? Now I don't mean Wonder Woman in her original duds, we all know how iconic and timeless the Amazonian goddess is. However 2011 wasn't exactly a banner year for the super hero. Her own tv show was set to air, only to be brutally scrapped. She has still been patiently waiting for her own cool blockbuster Summer movie. Then there was this: DC Universe Classics Series 17 Star Sapphire Wonder Woman. A truly interesting variant if I ever saw one: 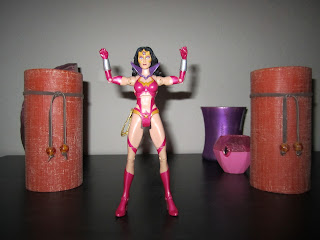 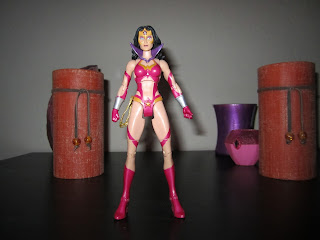 There is a reason why Wonder Woman is dressed in such a vivacious ensemble. Now as I have mentioned before I am all about Marvel, but there are a few characters I really like from the DC world. With that said there is a lot that I simply do not know about all the various story arcs and characters. From what I do understand this costume is from a storyline where WW becomes a member of the Star Sapphire and works alongside another Star Sapphire, Carol Ferris. (This is all connected to a Green Lantern story, wiki Blackest Night for more.)

﻿Alright folks, so what is the verdict? Trashy or timeless? My vote is going to go for trashy. Before anyone starts to think, "Why Miss M? Jealous of Wonder Woman's revealing costume? Snark, snark." No, I have no problem with WW being so scantily clad. I am fully aware that super hero females, and males, are going to wear next to nothing at times. He-Man wears a loin cloth and harness for goodness sake. I mean a super hero can't save the world in a billowy number from the latest Jil Sander collection ok?
Here is why this version of WW gets the trashy vote. I can't help but think that this WW is getting ready to try out for the latest Cirque du Soleil production. She needs to be wearing a glittery mask and doing freakish acrobat tricks, not saving the world in outerspace. Am I wrong for this? I am all for creative ways for iconic super heroes to change their look up, however this look is Wonder Woman's experiment with an acid wash jean jacket, or a foray into Z. Cavaricci jeans territory. Twenty years from now she is going to look back and say, "I actually wore that?! What was I thinking?!"

It is alright though Wonder Woman! We have all been there. (I used to be platinum blonde and loved bare midrift tops, I knew better.) Let's go to the sidebar for a second though, shall we? Fashion is fun, but for some reason I feel that people get duped into anything. For example this past year all anyone could talk about was the whole colorful denim craze. Everyone and their mother was sporting red, lilac, or hot pink (to name a few) denim jeans. People from here to Etheria were acting like they had never seen this style of clothing. We need to stop injecting ourselves with amnesia and really remember that literally everything comes back every year in some form or another. A couple years ago we were all going gaga over colorful denim. We've been doing it since the '80s, possibly longer (I can't vouch for anything before '82.)

I digress too much. I must be retiring for the time being. My soaps are calling and I have said pretty much all there is to say about this Wonder Woman variant. I hope everyone is doing well. I will return with more fascinating dorkette posts soon! And...

Get ready dear readers, an all new Toy Chest Tuesday will be returning next week and I have been workin' up something that will scream out the virtues of friendship, babies, and kisses of death. It will feel like someone is practically ripping your heart out. I've said about all I can. Until then...
Posted by Michael Lynn P. at 6:49 PM