Do girls ever grow up wanting to be dorky? Let's ponder this quickly, shall we? I don't really recall there being dorky female role models when I was younger. In fact after a certain age it was expected that I would grow up and get over my issues with wanting to own toys and comics. The messages were loud and clear, "Only people with no lives end up collecting toys for the rest of their pathetic days. You are a pretty girl, you'll make someone happy one day, but not with that collection. Grow up."

I never really grew up. My crazy white girl self still gets a thrill out of the newest She-Ra release or finding that rare item on a Toys-R-Us shelf. I keeps it real. Real dorky. And though some Toys-R-Us cashier folk look at me kinda strange when I buy stuff and do not require a gift receipt, it is all good. People should be able to collect whatever they want no matter their age.

In fact it would appear that as of late there has been some recent movements to have dorky girls be cool and a regular fact of life. Thanks to Zooey and her show New Girl there has been this "adorkable" moment on television right now. But is it really dorky? I watch her show and I just have to say, she could be dorkier. To start with I love the show, but really Zooey? Really? The only dorky things her character Jess does is act goofy, sing her own theme songs, and wear hipster clothes. I need more! I need to see her geek out in a toy aisle because they reissued some vintage figure. Or she needs to have a serious conversation regarding her thoughts with the latest issue of Uncanny X-Men and if Jean Grey will be coming back or not. She must have a comic in her hand at some point. Because that is real dork stuff ok folks? Hipster dresses does not a dork make.

There is a point to all of this dear readers. As I mentioned, when I grew up in the Dark Ages there were no comic clutched dorkettes for me (and other mini-dorkettes) to look up to. I grew up believeing I'd be shunned from society because I insisted that mermaids were real. What the hell! However we are no longer living in the Dark Ages. Mini-dorkettes have many more possibilities for living a nice healthy dork lifestyle well into their nineties. This is all thanks to certain items that are on shelves today. Might we really be finding ourselves in the Dork Ages? (It's happening all around us.)

Monster High dolls, made by Mattel, are these "scary" creature dolls that are the children of famous monsters (i.e. Dracula, the Werewolve, and the Mummy to name a few.) There are the dolls, each with their own pet and personality that plays off the typical high school archetypes; play sets featuring things like a coffin bed; and extra clothing sets for the monstrous teens. One particular clothing set offers outfits for certain "School Clubs." There is the Fashion Entrepreneur's Club that Clawdeen Wolf is a part of. Draculaura is a member of the Newspaper Club, which is so funny because the vampire's age is ancient. Just like the newspaper. Sports fan Abbey Bominable enjoys the Snowboarding Club. However I think the Comic Book Club is by far the best.

Ghoulia Yelps (daughter of the Zombies) is the character that goes with the Comic Book Club attire. She is a zombie and according to her bio is one of the smartest teens at Monster High, though she only speaks zombie and moves incredibly slow. (Didn't we all move slow in high school? I just wanted to sleep.) 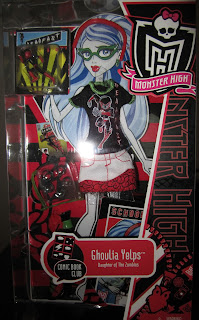 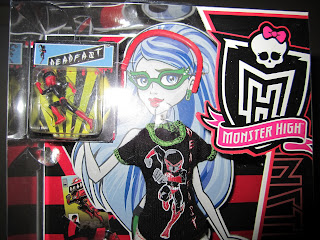 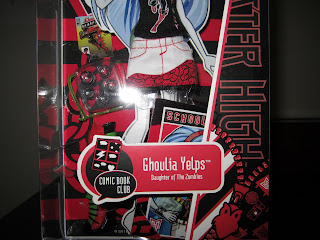 This set comes with a head band, t-shirt and denim skirt. I love that the headband and denim skirt have a real "brainy" look. Miss Yelps also has a pair of ankle boots, bangles, and glasses to round out the outfit, though nothing is complete without her Deadfast mint on card action figure and Deadfast comic. How funny that she loves reading about a hero named Deadfast when she is dead slow. (Ah the joys of zombie humor.) Oh, a trading card is also included.

If we take a peek at the back of the box we can see the other outfit choices for everyone's favorite Monster High students. 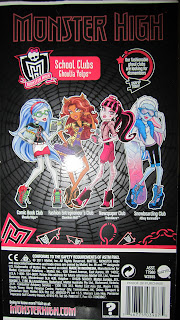 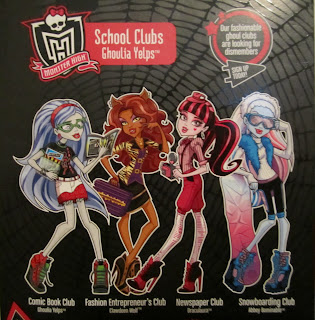 I think Ghoulia is my favorite. How cool is it that mini-dorkettes (and full grown dorkettes) have the chance to collect something that is like a love letter to dorky folk everywhere? When I was younger there was nothing on the shelves that could celebrate and make cool the idea of being in a Comic Book Club. How awesome would it have been to go to Comic Book Club meetings in high school? I mean we would have all been made fun of until the end of time, but it would have been worth it!

Anyways these dolls are really fun even if the actual sculpts look like they could use a brain sandwich or two. They do bring forth a nice alternative to the pretty normal dolls out on the market right now and I think that is a good thing. Though the verdict is out on what the Hardcore Goth Society thinks about them. (Are they friend or foe?) Either way I just hope that kids these days know it is alright to be dorky and to never stop collecting to their hearts content! Now if everyone else could get that message...
Posted by Michael Lynn P. at 5:32 PM