Remember when it was cool to protect the planet? Where our greatest resource was Earth itself and poor rain forests were being wiped out entirely? How were we going to breathe? We needed a savior. A hero that was ready to save Earth, the ultimate damsel in constant distress. Jesus was busy. Enter: Captain Planet and the Planeteers!!!

Captain Planet and the Planeteers was an interesting cartoon. I can't think of any other time in my life when I wanted to defend Earth from pollution more. What better way to do that then by collecting plastic figures? But hey, at least some of the toy packaging was made from recycled materials. These toys were green before going green was even a "thing."

I loved the cartoon and toy line. First of all it was so cool to see a cast of Planeteer heroes hail from various countries with different ethnicities. I really liked learning about all the multi-cultures instead of everyone looking like they came out of a bag of Wonder Bread. Each teen had their own special ring that called upon Captain Planet and controlled one of the elements including a new fifth magical element called Heart, which was pretty lame even for my standards. I mean the heart is my favorite shape for crying out loud, but let's be real. Either way it all just seemed so eco-cool though didn't it?

Enough of the do-gooders! The villains were just as cool, which is why this Toy Chest Tuesday we'll be looking at Dr. Blight, the devious and demented biochemical genius! (And is this ever a hot mess of a toy!) Let's check out some pictures! 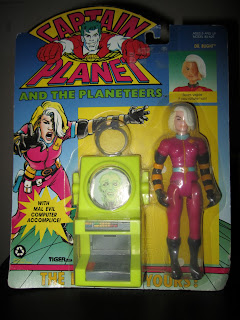 Isn't she just pure fun? Decked out in a magenta jump suit with rubber looking gloves and boots, this chick means business. She wants to wreak Earth like a lusty Bree Van de Kamp in a dive bar. Dr. Blight also comes with her evil accomplice, the Mal Evil Computer! 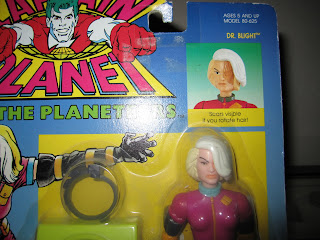 My favorite thing about Dr. Blight is her hair action feature. I love that behind that sultry hair is a charred toxic mess. I really felt like an edgy rebel owning this anti-pretty toy with missing eye. Can I just say though that I have always loved the idea of hair covering part of the face all seductive like. Jessica Rabbit had the look down and I always wanted my hair to do that too. Until, of course, I actually did and then it just looked goofy. (As much as my heart breaks, I am no Jessica Rabbit.) 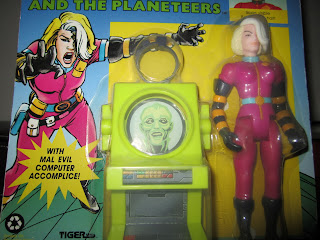 Here is a better picture of the Mal Evil computer. The face actually looks like that Dr. Wily alien thing from Mega Man 2. And here are some interesting factoids: Meg Ryan briefly voiced the vile Dr. Blight in the cartoon for some episodes while Tim Curry was Mal Evil for a couple years too. How cool is that? I mean this cartoon had a touch of gravitas to it! 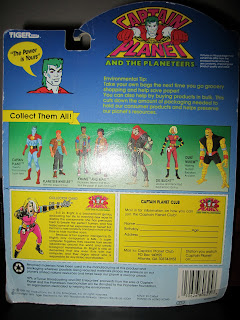 This picture shows all the interesting stuff occurring on the back of the card. As you can see Dr. Blight was the only female from the first series in the Captain Planet toy line. Of course she was. Why on Earth would a toy company release numerous females in a 1st series toy line? That would just be crazy. Le sigh. 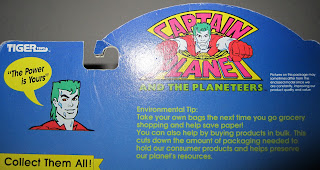 At the top of the card Captain Planet wants to give us all a friendly environmental tip. (Feel free to read it over.) I like how this tip predates the whole concept of stores selling reusable shopping bags for $1.99. Along with the eventual obsession of bulk buying at Sam's and Costco. Oh Captain Planet you were so on trend.

"Collect them all!" the yellow banner says with excitement. Here were the offerings for the 1st series Captain Planet figures. There was:

Captain Planet- Powerful environmental super hero with mullet.
Planeteer Wheeler- With the power of Fire! (He also had power over the butterflies in my stomach.)
Kwame and Ma-Ti- Planeteers Kwame and Ma-Ti with the power of Earth and Heart. Goodness that Heart element was really goofy, though not as goofy as my seductive hair look.
Verminous Skumm- King size sewer-rat villain who just happens to look like Vincent from Final Fantasy VII, with a need for a nose job stat.
Dr. Blight- Devious and demented biochemical genius.
Duke Nukem- Walking nuclear radiation accident and no relation to the Thing or the video game action star (honestly!)

This trading card also gives out a brief bio of Dr. Blight. God I love trading cards with bios on them. This bio has got to be the best bio in the history of toy bio cards. Seriously. Check it out for yourself but here are a few of my favorite quotes...

"She has previously tried to create the perfect human, and has tested some of her experiments on herself first." (That's a bad bitch.)

"Dr. Blight is now so demented that she even flirts with her computer..." (Holy cow this is a hot mess and totally addresses most people in the 21st Century.)

Dr. Blight was truly one of my favorite toys. In fact when I was younger I had two and just recently nabbed this mint version. What a great toy from a great cartoon. Now the biggest question of all is when will we see this cartoon and toy line return? I want a reboot, because the Earth is silently crying, waiting for a hero; with green mullet hair. Just remember folks...

The Power Is Yours!