Hello dear readers! As I work on some fun returning features for the new year (i.e. Toy Chest) I thought I would take this time to debut a new feature to Diary of a Dorkette. I have noticed that I spend a great deal of time discussing and addressing the awesomeness of girl toys, girl heroes, and pretty much anything related to kick ass females. (Yes I even consider Rappin' Rockin' Barbie to be totally kick ass.) I can't help it, I enjoy sharing the great things that make me happy.

However I do tend to leave the guys out. I know there may be one or two male heros or figures that make an appearance every now and then, but this is the 21st century right? Male toys should have the same amount of coverage as their female toy colleagues. We are all in this together. Hence the brand new feature: Heroic Hottie! Every month we will take a look at a male action figure and really see if he has what it takes. So get ready to drool and ogle. You can look, but you can't play!

﻿
﻿Now this is in no way a toy review of the awesome features of this figure from Diamond Select. If you want those details head over to Planet Oa  for a really great review and perfect reason to run out and buy quite possibly the best Gambit ever made. 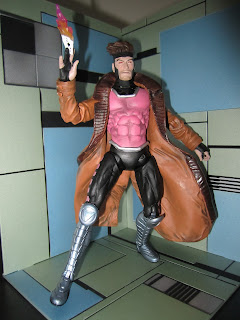 So here is the thing, I have a thing for Cajun men. Gambit is just one of those characters that can do it all. He is kind of a rebel type but does do the right thing. (Barring that whole Mutant Massacre thing.) He also knows how to shuffle, which is always nice. 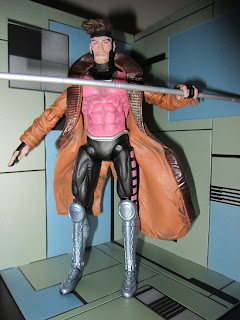 He also seems like the type that would get into a bar fight at 4 in the morning. Those are important qualities to possess in order to be a Heroic Hottie. (He-Man take note.) Actually one of the reasons I like Gambit so much is the long simmering relationship between Rogue and him.
There were a few great super couples from the X-Men stories during the '90s that have been informing story today. Rogue and Gambit were one of those couples and unlike the triangle of Scott, Jean, and Logan or the theatrics of Betsy and Warren, Gambit and Rogue really had this sad and depressing love story. At the time Rogue couldn't touch another human (due to her mutant powers) and Gambit was a bit aloof. However they always went back to each other and the tension they had to deal with.
Imagine not being able to touch the person you really want to touch, because you'll more than likely become brain dead? That just sounds so sad. Completely unrealistic, but still so sad. I remember always rooting for them and completely freaking out when they kissed for the first time. Of course currently the future of the two is very much up in the air because Magneto is sniffin' around Rogue. Can I just say I have never understood the appeal of Rogue and Magneto together? I mean maybe if Rogue was flirting with Michael Fassbender's Magneto, but old balls Magneto from the comics? That is just eww.
Anyways I am rambling too much, this is all about Gambit. Diamond Select even did a great job on his face. That face sculpt has the perfect Gambit "look." Action figures have come a long way haven't they? I never would have guessed I'd be one day seeing such a great looking Gambit. He even comes with his own section of the classic Danger Room. Dangerous indeed. 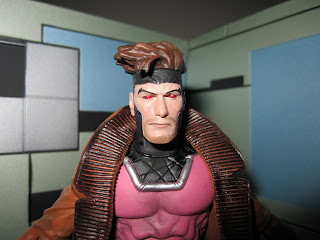 This is truly one of the best Gambit's I have ever seen, which is why he needed to be the first Heroic Hottie of 2012! Now if only Diamond Select would release a brand new Marvel Select Rogue to go with him...
Posted by Michael Lynn P. at 4:15 PM