The League of Extraordinary Bloggers has an all new assignment this week, and you all know I have something to say. The topic is Star Trek...


So here's the thing. I feel like out of everything in popular culture, it always comes down to the four S's.

Now I realize that one out of those four would probably not be on most people's list, but we shouldn't place the blame on William Shatner. I kid, I kid.

But no seriously, I have never really been a huge fan of Star Trek. In fact I have never really seen episodes from the original series or any other Star Trek show for that matter. I've seen only a few of the movies, and most of them have been largely forgettable. I did enjoy the most recent Star Trek movie and will more than likely see the new one. So you must be asking yourself, "Why are you even talking about this Miss M?"

I'll tell you why. Like with most things in this life, if a nice toy line exists, I will find a way to be hooked. And when Playmates had their long running and fantastic Star Trek toy line, I was hooked. It makes absolutely no sense, I know. How could someone who was not really a fan of something, be suckered into it all by action figures? 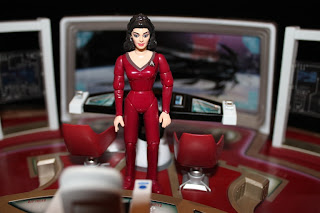 Deanna Troi was just so cool, and I couldn't even tell you why. Playmates dominated my dorky little heart with Star Trek The Next Generation. I loved this line. 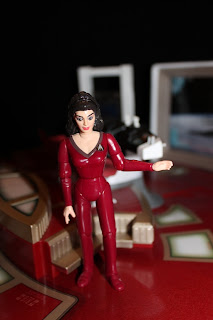 Articulation wasn't all that, but there was a cast of cool looking characters to own. One day I will share with you all my Star Trek collection, which still boggles my mind because I would not call myself a big fan of Star Trek. Deanna was my favorite though, and I went on a mad crazy hunt for this figure. I just could not find one for the longest in stores. When I was able to find one, I practically kissed the tiled floor in K-Mart. 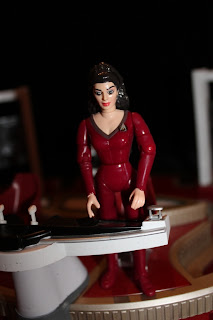 This line sold like hot cakes, and with so many female figures as an option from this line, I just found myself collecting it. Usually a line like this will only feature like one or two female figures at best. Not with Star Trek The Next Generation! This line was similar to Star Wars in that pretty much every character got the royal figure treatment. 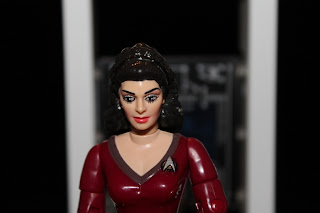 The details were really nice too. I loved the face sculpts on these figures. They were really just wonderful figures.

However, since I have been confessing far too much as it is in this post, I figure there is one more thing that I should confess about in regards to my affinity for this toy line: Whoopi Goldberg. The moment I found out that there was a Whoopi action figure named Guinan I was beyond hooked. I had practically made it my life's mission to own this figure. What was not to love? I have always loved Whoopi Goldberg and I feel like, in my mind, that if we were to ever meet we'd hang out.

I grew up watching her movies and even following her in the tabloids. I stalked the shelves left and right looking for her action figure, because in my humble opinion everyone should have a Whoopi Goldberg action figure. She had a freakin hat that looked like it was hiding the Enterprise in it. So cool.

I never found one though. But as of this post, I will more than likely be trying to get one on eBay. Believe that! So there you go. Ramblings from a Star Trek collector who has never really truly been a fan of Star Trek. Please feel free to revoke my dorky card and charge me with crimes against nerdity. I deserve it.

In the meantime though, please be sure to read over some other people's thoughts on Star Trek while I go on the lamb!

Rich looks at a blockier side of Star Trek.
Dex talks the scoop about his Trek experiences.
Daniel is full of humor and the unthinkable. Read carefully.
Newt delivers a mind blowing mash-up.
Big J gets a little stuff off his chest.
Andrew is ready to spoil you.
Reis gives us another mind blowing mash-up featuring the Snoop Dog.
Jon has an impressive Star Trek hobby.
Jamie connects some Star Trek dots, read on it is interesting!

And be sure to head over to Cool and Collected to check out even more blogger's topics on Star Trek! Oh and one last thing, I have a cool story about the Enterprise play set from the photos above. It was from the last film and I got it for less than three dollars at Tuesday Morning. I really love it when stores have items on clearance, and then mark the price down even further! Just the best. Take care everyone!
Posted by Michael Lynn P. at 6:48 PM