Today's Toy Chest Tuesday is sort of like a sequel today! A very strange sequel to a very strange, yet lovable, toy line. Back in the late 80's ALF had a cartoon that expanded upon his family and friendships. It was a short lived cartoon and had an even shorter toy line. I have already mentioned ALF's intergalactic girlfriend Rhonda. But now let's check out ALF's sister Augie! 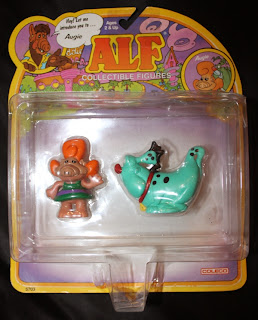 Packaging was very simple. One PVC figure and an extra piece came together. The other figures came with mini vehicles, but Augie came with the family dog Neep! Augie did have holes on the bottoms of her feet so she could ride other folk's rides. 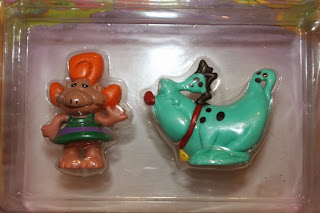 Ok so let's be real. I know that articulation and what-not has come a long way with toys, but there is a part of me that just loves little PVC figures. I think they are just so much fun. These ALF toys had no articulation at all, but this line is one of my favorites. (I do realize that I say that about pretty much every toy line.) Plus the good thing about PVC toys is that they are still pretty cheap. 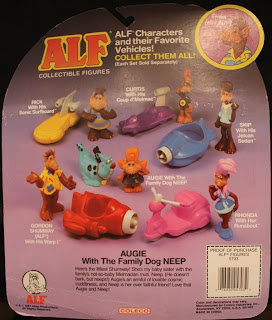 The back of the card is similar to Rhonda's card. The only difference is that Augie has her own bio that is narrated by Gordon (ALF.) I remember seeing this line at the local K-Mart and I just thought it was so cool! I mean who wouldn't want figures with included vehicles? They also had a sort Jetsons-like feel to them. 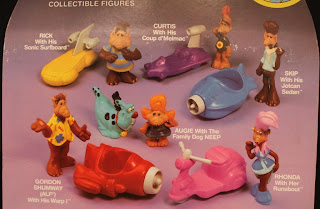 I originally had Rhonda and Curtis. I had wanted them all because like that girl in the AT&T commercial says, "We want more, we want more!" However this line was gone in the blink of an eye. I hate it when cool toy lines fade away fast. With that said though, these items can be found for a pretty decent amount on the secondary market. I recently got this Augie figure for less than $10 dollars including shipping. 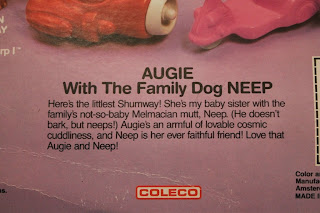 I love this bio. I really hope that someone will describe me as being an armful of lovable cosmic cuddliness. That just seems like a cool description. The word 'cosmic' just sounds cool. Doesn't it? Does anyone else ever imagine how they would like to be described? Like if you had an action figure of yourself, what would the bio on the back of the card say? I know for sure that cosmic cuddliness would have to be featured in mine for certain.
Anyways, this ALF toy line was a lot of fun. With word on the street being that ALF is actually getting a movie at some point, I do wonder what other ALF resurgences we will see. I was never really big on the television show, but I did love the cartoon and toy line. Did anyone else enjoy this line? Let me know! I hope everyone is doing well, and keep it here! I have some fun stuff coming up this week. I say that a lot, I know, but it is totally true! This should be a good week.
Posted by Michael Lynn P. at 9:03 PM