Toy Chest Tuesday is ready to rock! Do I really need to say anymore?


I know it seems like all I do is breathe toys and soap operas, but I am a truly multifaceted dorkette! No really, I am. For example I also happen to enjoy music. All kinds really, but my most favorite kind of music is the kind I can dance to. And I can dance to almost anything. I never said it was great dancing, but I know how to move to a beat for sure.

So back in 1988 Fisher-Price was really trying to cultivate my love for music by releasing a line of portable music devices that could give me a dancing beat no matter the location. Enter the Pocket Rocker! If you say it too fast it totally sounds like an adult toy. (If you know what I mean.)

Anyways, Pocket Rockers were essentially mini stereos that played mini cassettes. Each mini cassette came with one or two songs on it, so they were like singles. With so many different styles and colors to choose from, kids on every playground were able to rock to their own individual style. Let's take a closer look! 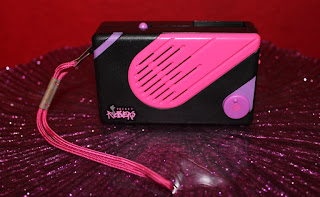 Pocket Rockers came in a few different styles. I totally had to own the pink and purple color combo. I love those two colors paired together. I also really love a nice hot pink paired with a teal. I sound like I'm talking about wine, but clearly I am not. Anyways, I love this design. From the speaker to the small volume button in the corner, these were just so cool. The strap was perfect for on the go action and still fits around my wrist today! Yay! 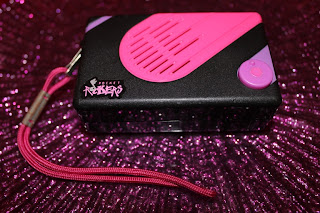 Here's a better look to see how big this thing was. It was about an inch to an inch and a half thick. I might be wrong on that, but I feel like that was part of the dimensions. This Pocket Rocker came with a mini cassette, it was the Bangles and featured two songs: Walk Like an Egyptian and Manic Monday. I loved me some Bangles. My mom and I would do the Walk Like an Egyptian dance whenever the song came on the radio, so it was only fitting that I also had the song to play in my room. Another favorite was Tiffany with: I Think We're Alone Now. Oh I love that song, both her version and the original by Tommy James and the Shondells. I also had the Belinda Carlisle mini cassette that came with Heaven is a Place on Earth and I Get Weak. I get weak just thinking about the sadness of having no clue where these mini cassettes are at now. I am just beside myself for somehow managing to lose them. Oh well, this is why we have iTunes. 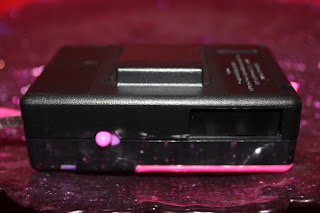 The little purple knob was the on and off switch while that slim rectangle in the upper right corner was where the mini cassettes went. At the time these came out, my parents thought I was still too young and irresponsible to handle a nice piece of stereo equipment. So I had to rely on the radio or Pocket Rockers for my music entertainment. I felt so grown up owning this thing. I feel like there are certain moments in life where you really feel like you are responsibly growing up as an individual, like learning how to drive or being able to legally order an alcoholic beverage. Being able to pick and listen to your own music also ranks up there as an experience that just makes you feel like you are making mature decisions. I'm not sure if that sounds crazy or not, but I hope it makes sense. Being able to listen to the Bangles whenever I wanted was just such an empowering feeling as a kid. 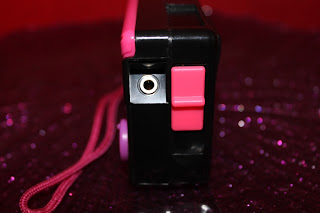 Headphones could be plugged into the left while the pink button helped eject the mini cassette. Like I said earlier, there were some brilliant design plans for this item. Fisher-Price really knew what they were doing. 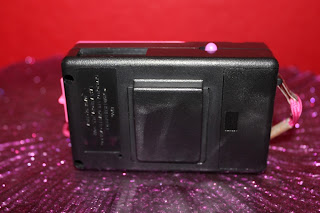 The back had a clip on feature so you could loop your Pocket Rocker to your belt or fanny pack. Whichever one you preferred. There was also a spot for batteries. All in all this was the perfect toy and lasted for a little while. Pocket Rockers would rock out during the tail end of the 80's before fizzling out in 1991. The problem though was that regular cassettes were already pretty much done for to make way for the compact disc, so there was really no way a mini cassette with two songs on it was going to last on the market.
I eventually gave up on my Pocket Rocker and upgraded to cassettes and CDs much like the rest of the world. In fact I still buy CDs every now and then. My brother laughs that I am the last one on Earth to do such a thing, but sometimes I just really like owning the whole CD. Purchasing songs on iTunes is great and all, but nothing beats having that physical item with booklet and cover art.
So anyways, thus concludes another thrilling Toy Chest Tuesday! Did anyone else have a Pocket Rocker? They were a really fun toy, and I hope to one day come across my old mini cassettes, because I would be very interested to see if they still work. Anyways, I hope you are all doing well and stay tuned! I've got a new mission from the League coming up. And guess what happens when I sit down with this month's Woman of Wonderosity? I'll give you a hint, we dish the dirt on men, volcanoes, and having the perfect shade of red hair...
Posted by Michael Lynn P. at 8:15 PM