It has been awhile since we've had a good old fashioned Dorkette Book Club offering, so I thought today would be the perfect day for us to check out something from the stacks.


I'm a glutton for collecting. It is not just dolls and action figures that get my heart going. I also have a penchant for books. All kinds of books. Some of these books are newer while others hail from my childhood. The Serendipity series of books is one such set that I devoured as a kid. They were written by Stephen Cosgrove and illustrated by Robin James. Each book had a nice life lesson built into the story while Robin James drew spectacular images throughout the pages. I loved these books so much! There was a mix of real creatures, humans, and mystical creatures throughout the series. These books were available at a wonderful time since cartoons like She-Ra, My Little Pony, and Rainbow Brite were introducing kids to worlds full of fantasy and wonder. My favorite story was Misty Morgan. 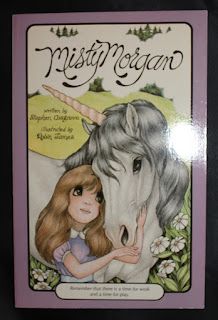 It was the 80's (this book was first published in 1978 though) and if you didn't like unicorns than you just weren't with the times. Unicorns were everywhere and aside from mermaids I was all about unicorns. They just seemed really cool. Who wouldn't want a giant horn on their head? Trust me, no one would try to mess with you.

Anyways, the story of Misty Morgan was simple enough. Morgan is a unicorn, and he wants to play with his friend the princess. Sadly the princess is busy working to make sure the castle is neat and that all the clocks in the castle are wound to the correct time. Two things about this, number 1: she has a lot of clocks. Like a lot. Put this princess on Hoarders, like, yesterday. (Followed by a special two part episode starring me!) Number 2: I would hate to have the responsibility of checking a castle full of clocks all day every day. Doesn't that just sound awful? Anyways, all Morgan wants to do is hang out with his friend. So after a bunch of failed attempts at getting the princess to take a break, Morgan walks into the Misty Meadows. Cue the slightly spooky music.

Finally the princess decides to take a break to have some fun, only she can't find her friend. She has a mini-meltdown and realizes that she needs to make sure she has time for her friends. Luckily for her Morgan makes his way out of the Misty Meadows and they ride off to have fun and enjoy the day. The moral of the story is to: Remember that there is a time for work and a time for play. Share time with your friends before they go away! I've always been bad about that, which is probably why I don't have that many friends. I really feel for the princess. All she wants is to make sure everything is in order with her castle, while Morgan just needs to be happy he is a unicorn and not mounted to someones wall. 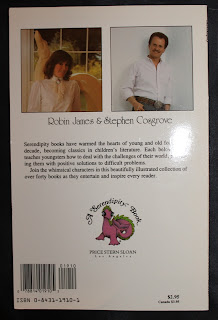 Anyways, the back of the book shows off images of the illustrator and writer. I love the Serendipity logo too. That creature is too cute. Does anyone else recall these books? Were they part of your reading line up? There were some reissued prints a few years ago, but these books actually fetch a pretty penny on the secondary market. Some titles go for anywhere from 50 dollars to nearly a hundred! I feel like there is a moral somewhere in all that: Hold on to all your crap because it will be your chance for retirement one day.
Posted by Michael Lynn P. at 5:28 PM