Well this week's Toy Chest was a very interesting one. I had originally intended on talking about a few other toys, but after standing around in my archival room I realized there was something I had said I would talk about months ago, and I never did! Adding to all this was LeAnn's Flea Market finds, and I figured this week would be perfect to talk about Perfuma!


So here's the thing. Growing up, the She-Ra toy line was probably my most favorite thing. Without She-Ra and her friends, my childhood would have just been dull and boring. Every time I would get a new She-Ra doll it would become my favorite and go with me everywhere. (At the time I called them dolls, now I like the term action-doll.) She-Ra traveled with me to the grocery store and visits to see family members. Double Trouble and I went to the zoo together. A few of the girls would end up sneaking into restaurants with me while I was out to dinner with my parents. However, Perfuma was the only She-Ra doll to sleep next to me at night.

Now I realize that a 31 year old woman typing about sleeping with a Perfuma doll must sound slightly deranged and weird, but just go with me on this. The thing I hated most growing up was bed time. Having to go to sleep meant cutting into all the fun with my imaginary world of She-Ra having grand parties with the ThunderCats and My Little Pony. I didn't want the party to end. So one night Perfuma and I hatched a plan. I was going to place her under my pillow, and I would then pretend to sleep. The best part being that I would wake up in the middle of the night and Perfuma and I would continue our adventures.

The plan didn't end up working out quite as I had hoped. I fell asleep and never woke up until morning. To add insult to injury, I forgot Perfuma was under my pillow. I then had a mini-meltdown. Followed by the realization that I had left her under my pillow. Had another mini-meltdown when I saw her hair was no longer in nice condition thanks to all my tossing and turning. So needless to say, I never tried that little stunt again.

Luckily I still have my Perfuma from when I was little, so enough with all the blabbering nonsense, let's check out the toy! 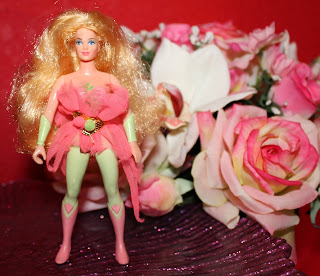 Perfuma was released during the second series of the She-Ra line. She was dubbed the "Scent-sational Flower Maiden!" And she was! Like Stinkor and Moss Man, Perfuma had a special scent. I had asked a long time ago on the MattyCollector forums what the scent was. I can recall the smell, but I wasn't sure if it was an artificial rose scent or like something else. Anyways, my Perfuma has clearly lost her scent, but she has held up pretty well!
Her skirt was one of the nicest pieces out of the series. It was just a pretty design and I only just recently came across the skirt. You can read about that ordeal here: Lighting the Way. Anyways, Perfuma was a very nice addition to the line. 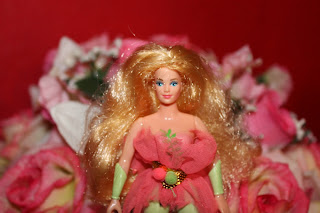 One of the things I loved about Perfuma was that she had this very graceful and beautiful look about her. She was the silly goofy type of character from the cartoon, so together she was a very fun character and toy. Her manipulation over flowers helped add to her whimsical charm. 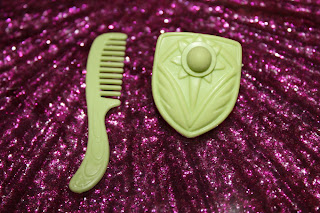 Like the other She-Ra characters, Perfuma came with a comb and shield. Every action-doll had their own special color coded comb and shield too. The color combinations for these toys was always so much fun. I loved the pink and green color combo with Perfuma. All the pink said she was girly and fun, while the shield said, "But I can totally kick your Horde behind if need be!" 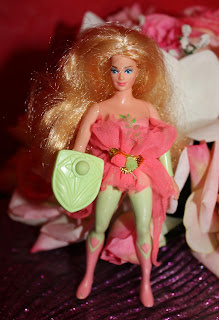 The shield slides on very easily! The plastic is soft, so the hook easily pops onto her wrist. I love this. Sometimes I get nervous with certain action figures and their accessories. The last thing anyone wants is to feel like the piece or the figure is going to break. 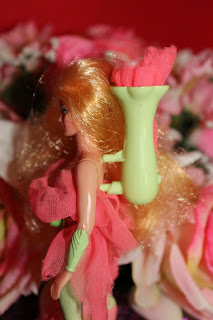 The other accessory that came with Perfuma was her flower backpack. It slides in easily enough into her back (though mine has not aged totally well.) 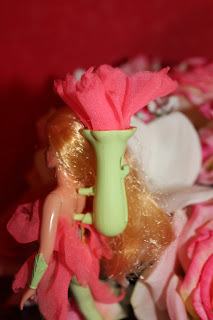 Once the lever is lifted up, a pretty flower blooms! Sadly the material is not as fluffy as it once was, but it still has a very pretty effect. 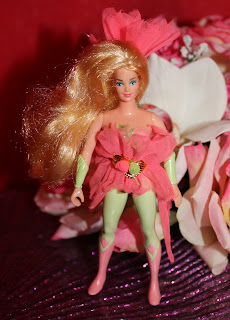 From the front it looks even better! The flower bloom looks almost like it is a part of Perfuma's hair! Simply stunning! I love the look of this toy, and I really hope that when the 4 Horsemen make their way to releasing a Perfuma Classics in the MOTUC line that she will look similar to this styling. There were some differences between the toy Perfuma and the cartoon Perfuma. Essentially the cartoon Perfuma had pink flats, more of a pink dress, and bangs. I really think the toy version will translate into a better look for a Classics toy. But, that is if we even see a Perfuma. I don't know what the future is going to hold with this MOTUC line. I do have my fingers crossed though that we see a new Perfuma. She is very lovely! 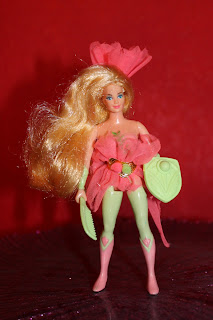 Here she is with all her accessories. The comb can double as a machete. I also must mention that Perfuma also came with a mini comic. Sadly I was not able to hold onto all the mini comics from my She-Ra items as a kid. I have tried to collect them again, but I think maybe Mattel needs to reissue those old mini comics in one nice volume. I would be fine with that. Perfuma was a special toy in the She-Ra line, one that I have many fond memories of. So enjoy the pictures and share your own memories about Perfuma! I hope everyone is doing well.