The League of Extraordinary Bloggers put forth a rather tricky topic this week:

You open your own sports agency. Which pop culture all stars will be your first clients? “Show me the money!”

Ok so let me be real, I know zip about being a sports agent and I know virtually nothing about sports. Nothing at all. I once joined a YMCA soccer team as a kid because I was told that if you made it to goalie status you'd get upgraded to a gold shirt. I was thrilled because I thought it'd be a gold lamé confection like Jem's Glitter n Gold look. It was just a golden yellow t-shirt. Golden yellow. Disgusting. So let's see if I can do this week's topic some justice...

Hey Kids! This is Advertisement!
Miss M's Super Star Sports Agency!!!!
Are you a Super Sport Star?
Think you have what it takes to be represented by the best?
Read on and find out! 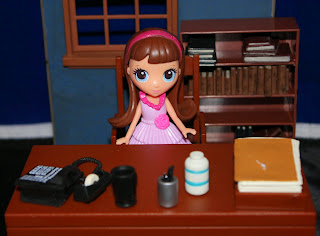 Hi. I'm Miss M (That's me in my office.) You may know me for my high octane journalistic skills featuring Heroic Hotties, Women of Wonderosity, and Bodacious Baddies, but did you also know that I am one of the best sports agents in the biz? I am! I have handled some of the best and brightest sports stars around. There is truly no stopping the future of your career and endorsement deals if you hire me as your sports agent! But don't just take my word for it, read on for true stories of some of my first clients.


Cammy and Chun Li
All Around Ass Kickers 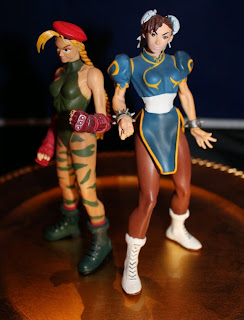 When I first started this business I wanted to branch out into an extreme sport. Street style tournament fighting has always been a dangerous sport, which only made me want to be involved all that much more. Cammy and Chun Li were the first two people to sign on to my sports agency, and it was a choice they've never regretted. As Cammy recalls, "Oh yeah, Miss M is the best. When I couldn't remember who I was, it was Miss M that said to me, 'Cammy, snap out of it girl. We're gonna get that memory back and find you some pants.' Miss M is just the best." Adds Chun Li, "She promised me she'd help find my father if I signed to her then fledgling sports agency. Miss M was down and out, but she insisted we'd all make good money. I don't mind getting paid for a fight." Leave it to Chun Li to speak the truth!
Colossus (Piotr Nikolaievitch Rasputin)
Very Big Slugger and QB 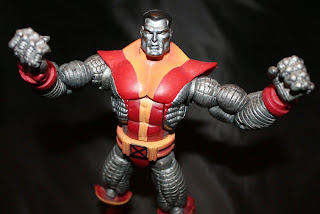 If I was going to make it big with my business, I was going to need to find a Super Sport Star ready to take me into the big leagues. I needed a baseball and football player. At the time I couldn't afford to hire two separate stars, so I managed to scoop up the very talented Colossus. In between saving the world numerous times and coming back from the dead(!), Colossus always managed to make sure the sports were also covered. We hit a snag when Colossus came out as a mutant though. Traditional sports types can be so archaic about a player's personal life, but with my skills as the ultimate sports agent, I managed to navigate Colossus through a difficult time in the public eye. Now sports teams fight for him to join their teams. He is making tons of money and one of his life long dreams finally came true: his face on a box of Wheaties. "Miss M sticks by everyone, homo sapien and mutant alike. This is why she is good at her job." Aw Colossus!
Ice Man
Robert "Bobby" Drake
Cracks Jokes and Sporting Records 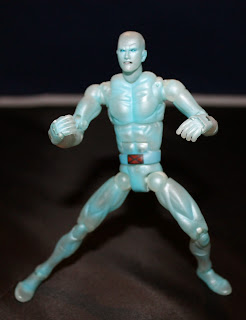 After my wonderful handling of Colossus with my sports agency, it was only a matter of time before other mutants came calling. Iceman first joined the agency insisting that making jokes should be a sport. When I told him that wasn't possible, Iceman thawed to the possibilities of playing other sports. He excelled at X-Treme outdoor sports, particularly those involving snow. He has set numerous world records with X-Treme snowboarding, skiing, and Polar Bear Plunging. He even took up hockey to much fanfare, though lately he has really enjoyed playing golf. "I find golf to be a nice social sport. I take my time, joke around with the other players. Joining Miss M's Super Star Sports Agency has allowed me the freedoms to excel at many sports and become a world renowned sports player, and not just a world-saving super hero."
Gambit
Remy LeBeau
High Stakes Poker Player 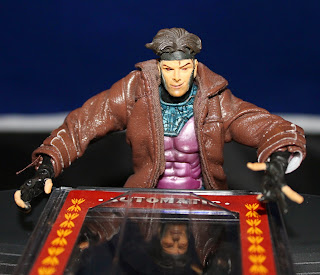 Here at Miss M's Super Star Sports Agency, we are truly looking for all kinds of talent in the realm of sports. I've always done well in games like Uno or Go Fish, but in order to really play with the big dogs and make some serious money, I knew I would need to hire someone with the energy to bring my agency into the world of competitive poker tournaments. Gambit fit the bill, "Listen petit, everyone know that if you want to get ahead in the world of sports, there is no one you can trust but Miss M."
Professor Charles Xavier
Master of Chess 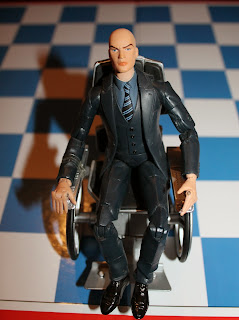 All kinds of sports exist these days. Some of these sports are so cutting edge that most people don't even know they actually exist! Take Astral Chess Projection for example. Sure we've all played chess before, but the world of sports entertainment is only just beginning to enter into the world of the Astral Plane. I quickly signed Prof. X for many reasons. First of all I am a sucker for a man with a good shaved head, and secondly, his mental chess powers are amazing. You should see him in a match with the Shadow King! "When I was first approached by Miss M to join her sports agency, I had no idea I would even be of use to her. I certainly have never let my wheelchair prevent me from living a full life, but I was not about to participate in wild wheelchair sports. I wear suits. All that changed though when I realized I could indeed join a sport that would fit my own unique interests."
Psylocke
Elizabeth "Betsy" Braddock
Ninja Fencing 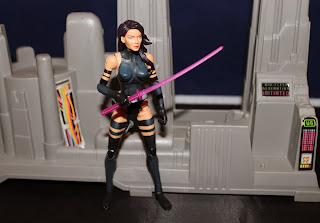 Sometimes the best sport is made up of two equally cool things. Ninjas and fencing. The two have never belonged more together than they do now. I was lucky to have Psylocke join my pool of talent. "I don't know exactly what Miss M is talking about. There is no such thing as Ninja Fencing. I'm actually hired by the agency to undergo special missions that the rest of the world is not supposed to know about. People get hurt. Shit goes down." That's quite enough Psylocke!
Katniss Everdeen
No Tribute Necessary 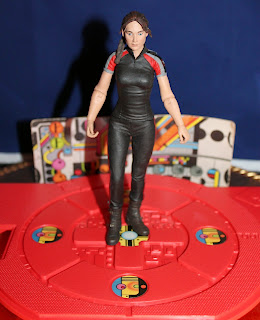 Here we have the hardest working woman in the world of sports. Katniss Everdeen is a newer member of my sports agency, but her sporting skills are superb in the field of archery. She wields a bow and arrow as if her life depended on it. I see many wonderful things for this young woman's future. "I originally signed up for Miss M's Super Star Sports Agency with the hopes that I could get into a simple sport, like basketball or knitting. Knitting sounds really nice and simple. For some reason she keeps getting me involved in games that truly become life or death situations. Seriously. Life or death. Someone please get me out of this, sign me up for soccer or swimming. Anything."
Wonder Woman
Princess Diana of Themyscira
Intergalactic Rodeo Queen! 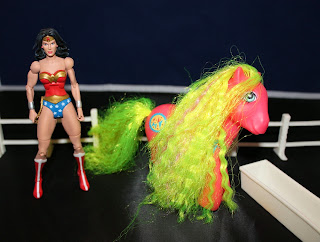 Finally one of my best talents to join the Super Star Sports Agency is Wonder Woman. There are many sports and events to attend, but one of the most exciting sporting events is the rodeo, but not just any rodeo, the Intergalactic Rodeo! Wonder Woman approached me about signing her up to the agency to do just that. Her life long dream was to become a Rodeo Queen. (Her original dream was to star in a nice Summer blockbuster movie, but no one has been able to make that deal happen. Yet.) Needless to say, I was beyond intrigued to sign her! The Intergalactic Rodeo is full of roundups and bull rides featuring all kinds of interesting and strange creatures from the universe. Wonder Woman takes it all in stride though, "Everyone assumes that my lasso is meant to find out the truth. The real truth is that I want my lasso to be the call of the cowgirl! The world is just not enough, I get to experience everything that the universe has to offer. I'm a natural at cosmic steer wrestling, space-saddle bronco riding, bull-rocket riding, and barrel-comet racing. You haven't lived until you've rode a wild bright pink pony from Saturn."
So there you have it folks, all the reasons you could possibly ever need to consider joining Miss M's Super Star Sports Agency! I'm also looking for special talent from other planets, namely Eternia and Etheria. I've heard there are some pretty cool people there. And remember kids, there can only be one kind of sport player: A Super Star Sport Player!
...But if you find yourself unable to sign with me, may I suggest some other talented and supreme sports agents and the folks they represent:
Rich has assembled the perfect football team.
There is some great talent with Newt's team, but he had me at Zap!
Dude! Big J is not playing with his picks!
As always, you can also go to Cool and Collected to read more posts as they are updated!
Stay tuned too, because at some point during this weekend I will be posting the next to last chapter of Adora's Search for Honor! It is going to be so freakin good you will be asking yourself, "When is Mattel going to release all of She-Ra's friends already? I am dying to reenact these last chapters!" I mean, I feel like that is what you will all be asking yourselves. Hope all is well.
Posted by Michael Lynn P. at 1:49 AM