So this is technically another entry into the lovely Dorkette Book Club, but I found some more of my old Fear Street books while visiting one of my favorite used book stores today, so let's check it out!


For those just checking out this sordid tale of greed and the quest to sell off all my possessions for easy money as a teen, only to instantly regret it years later, let me give you the briefest of Cliff's Notes. Growing up I was never the popular kinda girl that had guys taking her out on a rotation of dates. My dates were books. I loved reading (and still do) and though I had a wide range of tastes, my heart was wrapped up with fast fiction from the likes of R.L. Stine and Christopher Pike. I loved the Fear Street Series as well as all the creepy horror/thriller/sci-fi type stuff from Pike. My collection grew and I had a very nice little library going on, until one day I thought to myself, "I want to sell these books. I don't need them anymore, and maybe someone else would like to give these books a shot." I wish I could say my decision to sell these books was because I was blinded by some guy or something, but I was still dating other books. So it was of my own folly that I ended up selling my books to used bookstores in the area.

One such bookstore was called Jem Books. Jem Books! I mean there was no relation to Jem and the Holograms, but it was close enough to be cool for me. So I marked out my names in the books with a black marker, and sold them. Years later I would come to regret that decision immensely and during the Summer of 2008 I would go on a hair brain adventure to all the used bookstores in the area hoping to maybe stumble upon the old books that I had sold off. Now I know it sounds like a really stupid plan. More than a decade had passed since I had sold them, under what universal law would these books still be there?

Well, they were! I ended up finding numerous books that had my marked out name in them. They weren't as shiny and new as I had remembered them, but let's be real, I'm no longer shiny and new either. So ever since 2008 I stop in every now and then to used bookstores, most notably Jem Books, and after the stacks have been restocked a little, I end up finding one of my old books here and there.

These are the two I found today, let's look! 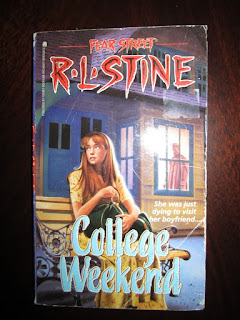 The great thing about Fear Street books was the cover. The stories were always good too, but it was always a given that the story was going to be good. The cover was what really put that extra terrifying cherry on the sundae. There was always a sinister thing going on with a little tag line like: "She was just dying to visit her boyfriend..." I mean who doesn't want to read this? I'm scared just looking at this cover. It's why you will never find me alone on a bench with a creepy guy looking at me through a window.
P.S. Clutching that bag only makes it worse. 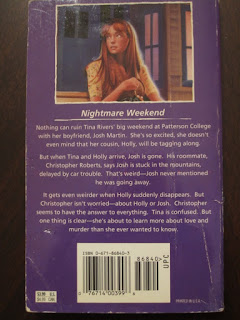 Poor Tina. She wants to visit her boyfriend for the weekend, and ends up having her cousin Holly tag along. Oddly her boyfriend isn't there and her cousin ends up disappearing while the boyfriend's roommate seems to have answers to everything. By the end of it all Tina ends up learning more about college than she ever wanted to know. All I'm going to say is this: the roommate is obsessed with her and her boyfriend may or may not die at the end. And we all thought student loans were the scariest thing about college...
The Surprise Party 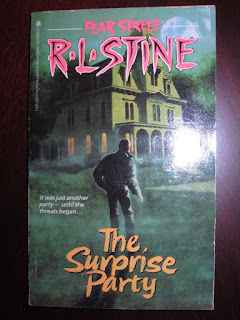 The Surprise Party was one of the earlier Fear Street books. The Fear Street stories were always scary, but the first few books in the series always seemed to have the more creepier covers. These books were controversial at the time. Parents were horrified that their children were reading such dark and scary stories. At least kids were reading though, right? Anyways, The Surprise Party cover had all the makings for a really good B-Horror Movie cover. "It was just another party- until the threats began..." Since I always had a hard time fitting in, I never went to too many parties. So this book seemed part cautionary tale and part, "If I ever do go to a party, I hope it is scary like this one!" 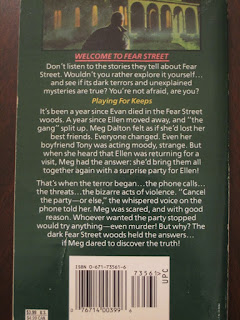 The earlier books in the series featured a nice chilling little intro to what Fear Street was all about. The sentences are just daring you to jump right in regardless of your puny fears! The story line for this book was fun. A group of friends are sort of disbanded after one of their own dies in the Fear Street woods (Evan.) One girl (Ellen) moves away and when she decides to move back her friend Meg decides to throw her a surprise party. But then all these creepy things start happening all leading up to the surprise party for Ellen that ends with someone getting shot and the truth coming to light about what really happened to Evan in the woods. This book was interesting because the chapters would switch from perspectives. One perspective was from Meg while the other was from her boyfriend Tony, who may or may not be the killer!
I love Fear Street books. I know they aren't considered one of the literary greats, but I could care less. These books have a very special place in my heart, and the simple fact that I am still able to find the ones that I had sold off so long ago... well that is just the coolest thing ever! Did you ever visit Fear Street?
I hope everyone is doing well. This week has been a busy one in terms of posting, but get ready! I have a nice interview coming up with a Heroic Hottie and the final chapter of Adora's Search for Honor is going to hopefully be posted this weekend! At long last the story has come to an end! If you have been following it, get ready, it will hopefully be a great ending!
Posted by Michael Lynn P. at 9:59 PM